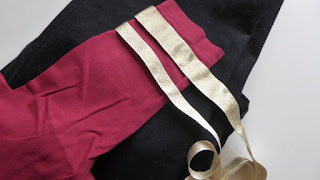 Okay, so that may be a bit overdramatic...

I'd just finished sewing a couple of bits of gold ribbon around the cuffs of a cheapo red long-sleeved T-shirt, went to put it on so I could pin on the narrower gold ribbon for the shoulder yoke and...

... couldn't get my hands through the sleeve cuffs anymore!!! "What is that silly witch going on about?", I hear you ask.  Why, it's (nearing*) the end of a month so that means it's time for some Star Trek fan art.  My Star Trek fan art!  As my piece, "These are a few of my favourite things!" got the most votes in the previous challenge, I got to set the theme for this one - and here it is:

The theme for this challenge is Creepy Cosplay!

For this costume party, I'd like to see you dress yourself (or a willing partner/friend/animal companion) or a mannequin/doll/action figure as something spooky and Star Trek related, whether obvious or obscure.  It doesn't have to be solely Star Trek, but the Star Trek element must be on show.  You can use existing assets, such as a commercial or pre-made uniform (for example), but you must create something new and significant for your piece too - such as part of your costume, make-up, a prop or scenery.

However, if fabric and foam rubber aren't your forte, or constructing with cardboard leaves you cold and you can't even bring yourself to give it a try, by all means go with something that you're more comfortable with, such as a drawing, CG model or photo-manips.  But... if you go down the 2D route, your drawing/CG model/photo-manip must be of a recognisable Star Trek character in costume as someone/thing else, and you cannot use any existing assets (except for the photo that you may be manipulating, of course).

So, here is my completely fictitious (even within the Star Trek universe) and very basic uniform top based on an old long-sleeved t-shirt that was languishing in a drawer.  To keep it as simple as possible I just sewed on gold ribbon for the shoulder yoke and cuffs (although, sewing non-stretchy ribbon on to a stretchy fabric was a bit of a bugger as the second photo up there attests to).  I got MirrorMe to model it but that meant flipping the photo so that the Starfleet badge came out the right way around. 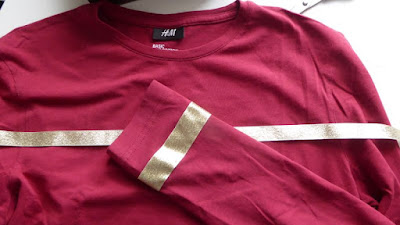 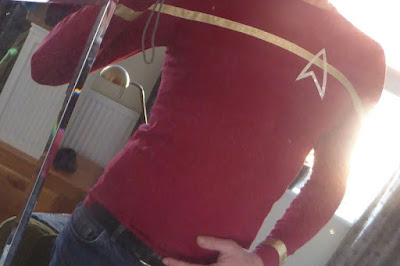 Here are some cardboard props I hastily threw together: some gravestones and one & a half "bluegill" parasites for the The Next Generation episode "Conspiracy".  You'll see why only half of one was needed in a mo. 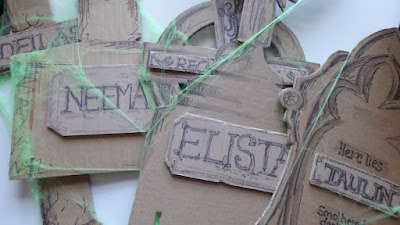 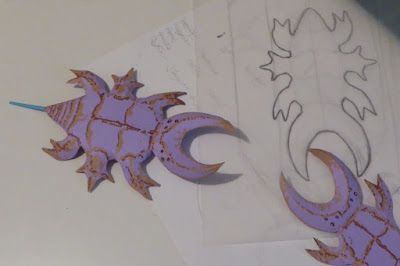 Rather amazingly, the weather played ball (it's been a gorgeous day here - blue skies and sunshine, and really quite warm despite a strong wind) so I was able to go out into the garden with my props, Camera & Tripod and set up the Hallowe'en scene.  Here is one of the photos from the many, many that I took (this one's from the first batch - before I realised it would probably look better from a higher angle): 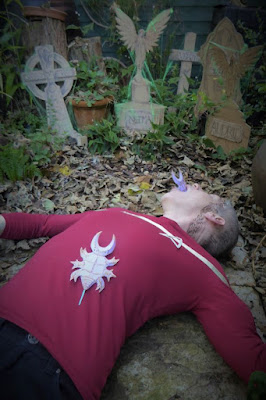 As you're probably still saying "But, really, what is the silly witch going on about?", this idea stemmed from one I had some time back involving a plush Xenomorph chestburster (that an ex-boyfriend, The Wiggler, gave me a long time ago) bursting out of a Trill (a humanoid alien with a trail of spots running down its sides from head to toes) in a horrible take on the Trill symbionts (a massive slug-like being that lives inside the humanoid Trill).  The chestburster toy lays across the top of the comfy chair in my home-office, so it's always on show meaning that idea is often at the forefront of my mind.
I originally planned to do that idea set in a Trill graveyard, so I made some gravestones for deceased Trill.  I chose the hosts of the Cyl symbiont (Cyl is from the Trek literary universe), including Neema Cyl - Audrid Dax's daughter (Audrid was one of the previous hosts before Jadzia and Ezri from Deep Space Nine) - but then remembered Cyl's and Dax's connection to the "Conspiracy" parasites (from "Sins of the Mother" in the Lives of Dax anthology - one of my very favourite Trek books) and thought it would be much better to use them rather than the chestburster (and I didn't want to rip my top open!).  So, I changed some of the names on the gravestones to other Trill characters involved in the Litverse's return of the parasites storyline (from the DS9 post-season 7 novels, or "relaunch"): Audrid (Dax's fourth host), Jayvin Vod (Audrid's husband and Neema's father), Taulin (Cyl's host in the mid-late 24th century, and a Watcher for the parasites), and Verjyl (a host for the Gard symbiont who identified and captured the murderer Joran Dax, and became the first Gard Watcher).
In the scene, I 'play' a future host of Cyl having succumbed to the parasites. 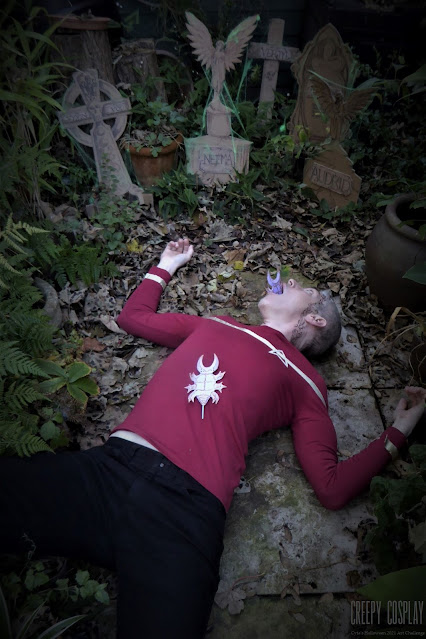 * I couldn't post this at the end of the month (i.e. Hallowe'en) because that's when the Garden Photos Event kicks off with Terrifying Triffidery!  So, I had to quickly slap this together and pop it up now which is why the image above may not be my final piece - I'll be continuing to work on it up until Saturday night, I should think. 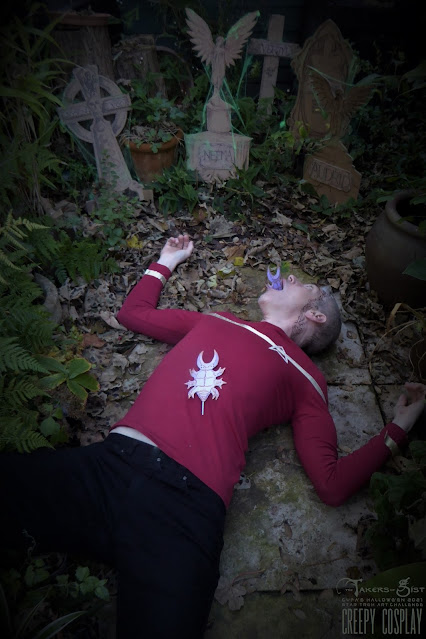 Labels: Canvas, I We Me Us, Manual Labour, Star Trek