I had a terribly unnerving dream last night. I was trapped in a box for ages, only managing to escape by instilling myself into the wood and causing it to grow into a tree. Then a woodsman cut me down and carted me back to his cottage. There, his mother carved me into thirteen little dolls for his daughter.

I think this dream came about from listening to Sophie Ellis-Bextor's Wanderlust album in Car on the way home last night ("13 Little Dolls" is track seven on it), then watched an episode of Malcolm in the Middle in which Reese intends to mail himself to China (with the intent to beat up his penfriend) in a wooden packing crate ("Jessica Stays Over" episode 5 of Season 7).

Have any of you had any bizarre dreams influenced by something that's happened to you during the day?

Posted by Inexplicable DeVice at 09:18 7 comments:

Labels: I We Me Us, Mythtakes and Leg Ends, Witchcraft

You are only human*


I really can't be bothered to write up synopses for these books in my own words (partly because I've been working on another upcoming book challenge post, and I'm now synopsised out!), so you're getting the publisher's description/back cover blurb and just a few words about what I thought of these novels. 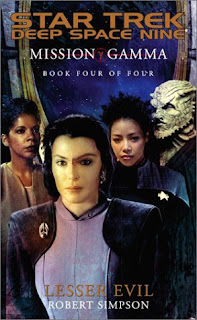 Continuing with the Deep Space 9 "relaunch" novels, this is the fourth and final book of the Mission: Gamma mini-series. It furthers storylines set up in earlier books (and TV shows), and moves along at quite a clip.
Anyway, here's the publisher's description:

Chaos erupts aboard Deep Space 9 as the crew begins a desperate search for a killer in their midst, catapulting Colonel Kira Nerys on a dangerous chase into the heart of the Federation. But the crime she seeks to avenge is part of a plot more ancient and far-reaching than anyone suspects, and that secret, if exposed, could divide worlds throughout the Alpha Quadrant.

Meanwhile, as the starship Defiant makes its way back toward the wormhole and home to DS9, a startling discovery shakes Commander Elias Vaughn to his core and brings to light the truth behind the most tragic mission of his long life. As the crew struggles with the implications of what they've found, their captain's judgment comes into question… and casts doubt on the final outcome of their historic voyage through the Gamma Quadrant.


Having been cooped up in the house this morning because of the (admittedly light) rain and making sure that Chrysaor had gathered all his things together before he left, when the sun came out this afternoon, I took myself down onto the beach to get some air.
Svaathor offered to come with me, but the last time we took a stroll on the beach he moaned constantly because sand kept getting stuck in his hooves, so I thanked him but made sure to point out that he could "get a lot of his River Mun study done on a lovely afternoon like this". Luckily, he agreed and made his way back to Frogshall.

Chrysaor: The Tea Towel is Mightier than the Sword

Well, that was unexpected.

It's not everyday one has to shoo a Dame Commander of the Order of the British Empire off one's driveway with a tea towel. 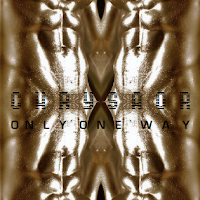 This all came about thanks to a visit from Chrysaor. You know, Medusa's son?
I haven't seen him since he was a surly teenager, but now, five years on, he's grown up to become quite the successful young man. Of course, his success certainly hasn't been hindered by flashing his golden abs in the video for his most recent single.
Anyway, he popped round for a catch-up, some advice on a troublesome spell he's working on, and to see my cousin, Svaathor da Vjis, who's conducting a study on the River Mun in nearby Frogshall.


There are not many things that leave me unsettled or uncomfortable, especially in my own neighbourhood, but the Witch Wringers on Smallhopes Hill never fail to creep me out a little when I pass by.


These two examples were used until relatively recently - well past the end of the so-called Dark Ages in the 14th century, and even past the introduction of the Witchcraft Act of 1735 - as is evident by the fact that they're still standing and haven't rusted away to dust.
As reminders of a different time go, they're pretty unspeakable. However, I am comforted in the knowledge that although these Witch Wringers have been used, no actual witches have passed through their horrific spindles. Instead, I believe they were used to torture ordinary mortals.

Posted by Inexplicable DeVice at 17:32 16 comments:

The be all, but not the end all

...bazillions of things! But, the point of this meme from Eroswings is to choose five favourite things. So, without further ado, may I present my-
Our!
OK, our, lists. Five each.
Me first!


I didn't plan on posting another Norfolk Walks post immediately after the last one, but as Saturday was (mostly) bright and sunny, if a tad cold, and I had the afternoon free, I set out on what I thought was going to be just a quick walk around the woods behind Castlette DeVice.
However, as it took me a while to warm up, I kept telling myself: "Just a little further", and "Well, I'll just walk into Northrepps village", and "I might as well walk up Hungry Hill a bit now that I'm here", etc. etc...
Anyway, before I knew it, I'd walked bleedin' miles!