Narwhal in a Spacesuit


Having been besieged* with requests for a whale in a spacesuit, may I present:

in association with Starfleet Cetacean Operations

(Oh, OK, we'll stop now.  The whale is right at the end, so you're going to have to scroll through two or three sketches to get to it.  I'm not sorry)


First, here is my take on an alternate timeline/universe version of the Starfleet uniform that was used from 2373 onwards (in Deep Space 9 and the Next Generation movies).  This was my entry for the February Art Challenge - "Alternative Trek": 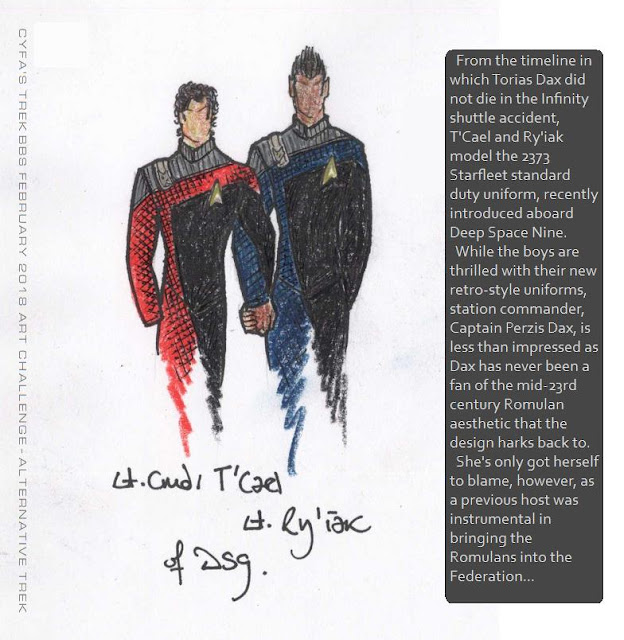 The uniforms are an unlikely combination of the 2260s Romulan Star Empire service uniform, the 2270s-2290s Starfleet "Monster Maroons", and the 2370s Starfleet standard duty uniform. The rank insignia are my own design as exquisitely modelled by @Scribble
They came about in a universe in which Torias Dax didn't die in the Infinity transwarp test shuttle accident (because transwarp worked - not the space salamander version, just a significantly faster & more efficient warp drive) and the Romulans ended up joining the Federation (just in time to save it from a massive Borg incursion - but that's another story).
Romulan models, T'Cael and Ry'iak are named after characters featured in Final Frontier by Diane Carey. You may notice that T'Cael's right hand is in a very awkward position for his fingers to be where they are on Ry'iak's hand. I'm wondering what he did for Ry'iak to hold him so uncomfortably? 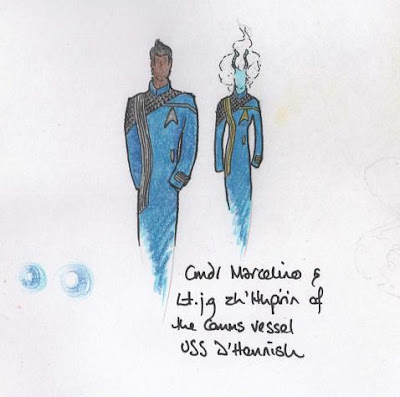 This is just a quick sketch to show basic design and colours. Our models today are Commander Marcelino (named after the USS Grissom comms officer actor in ST III) and Lt. j.g. zh'Ithpirin of the communications starship USS D'Hennish (named after this Cool Cat).
The off-kilter shoulder quilting and the piping along the other shoulder of this uniform makes it look too much like the 29th century Starfleet uniforms from VGR: "Relativity". I'm going to have to change them now (also, my original design notes were for a rusty bronze shoulder, not grey).
Someone pointed out a similarity to TNG Romulan shoulder pads, which were ridiculously oversized - even for the 80s! I prefer a more "Dynasty" look - still big, but with sequins and other embellishments!


As I somehow managed to get my entry for the March Art Challenge completed a few days before the deadline, I had time to continue messing around with alternate uniform designs. The sketches below are just some ideas for colour and style: 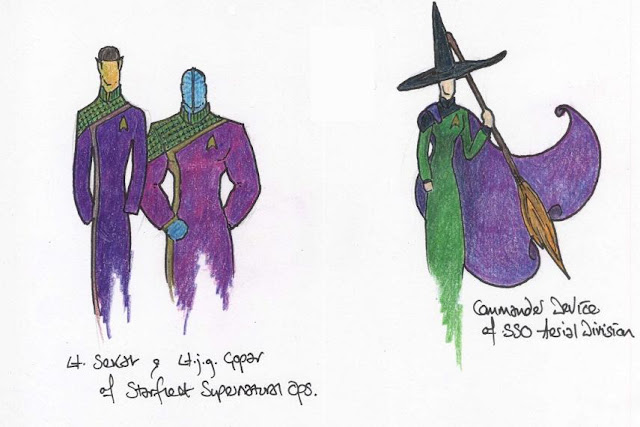 Somewhat serendipitously, the winner of March's Art Challenge has chosen a magical theme for April's challenge, so Commander DeVice up there may star in a future post here.


So, here it is.  The moment you've all been waiting for: A Narwhal in a spacesuit! 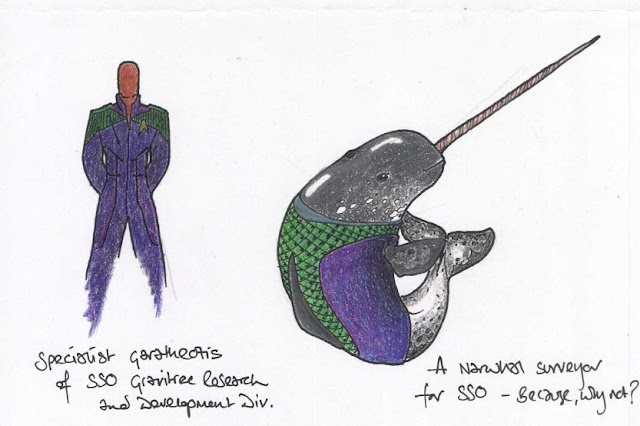 
Posted by Inexplicable DeVice at 17:33