It's A Faaaake! Not The Art Of Star Trek - Making Money


We haven't had one of these for a while, have we?!
Yes.  I've pulled my finger out and actually completed another of the Trek BBS Art Forum Art Challenges.
So, as set by the winner of May's art challenge:

Welcome to the June 2018 Fan Art Forum Challenge! This month's theme is all about money, money, money. Be it Federation Credits, Cardassian Lek, Karemman Dirak, Ferengi Latinum or Triskelionite Quatloos — it doesn't really matter, I just want to know what it looks like. Let's assume for a second currency in Star Trek's future wasn't all digital and you could actually hold it in your hands. What would it look like?

So the challenge is to create, design, illustrate or render money from Star Trek. This can be a coin, a bill or some other unseen form of currency. I'm looking forward to what you can come up with!


I was finding it difficult thinking of something to do until I remembered Spock saying "What does it mean - Exact change?" when booted off the bus in Star Trek IV: The Voyage Home. So, I started to design a few coins/credit chips to become a handful of 23rd century change. Here are a couple of the designs I came up with on 10th June: 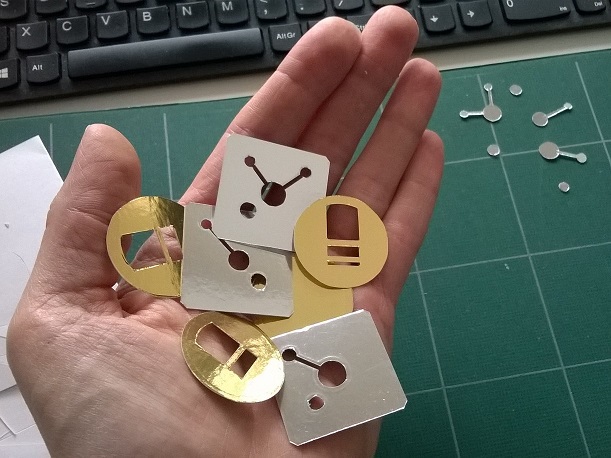 A little basic, being just cut-out bits of silver and gold cardboard.  I wasn't even sure of what alien currency this was supposed to represent, never mind the denomination.


Then today, I remembered that it was the deadline for the challenge and I hadn't done anything else with those bits of cardboard! 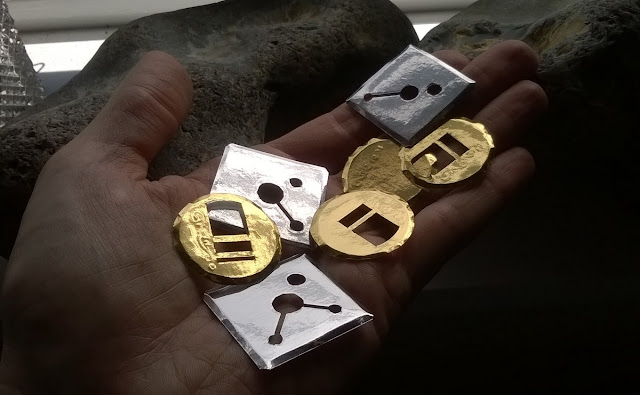 So, I fished them out from beneath a stack of other unfinished projects and set to making them a little more presentable (as I didn't have time to try out any other ideas).
First off, I scored the edges then folded them slightly to create a bevelled look.  Then I scored Vulcan calligraphy into the gold coins (which you might be able to make out.  Just), and photographed them (with Phone, not Camera) in a beam of light from a closed-blinds window.

And here's the result: 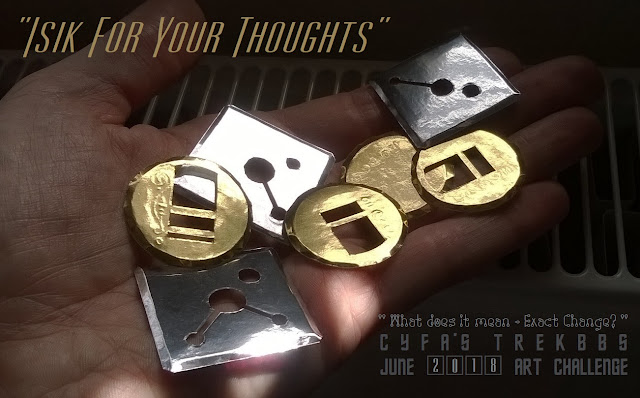 No. This is my final entry: 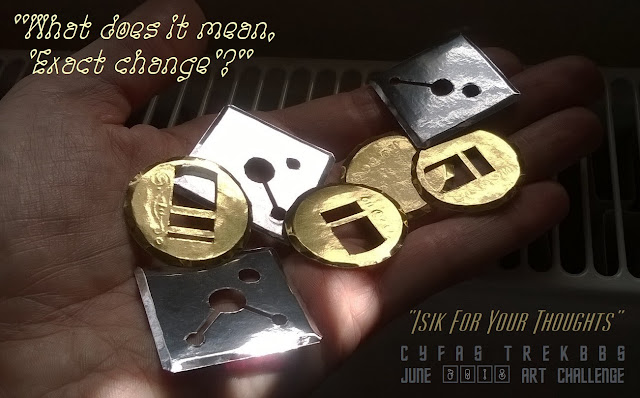 As a reward for your patience at more Trekkery, I'll leave you with some music: