It's A Faaaake! Not The Art Of Star Trek - Two Soups

"My God..." he whispered.  "What is that?"
"That," April breathed, "is a starship."
Perhaps it was the way he said it.  With all the awe and respect a human being could utter.  Staaarship.

You know what we haven't had in a while? Starships.
For September's Art Challenge, I thought we could return to what every Trek fan loves doing: drawing/designing starships. These majestic interstellar beauties should be magnificent, graceful, powerful, and instil a sense of awe and wonder. I'd like you to come up with your own unique design, be it a drawing, model (physical or a collection of photons in your computer), painting etc. Or, produce an image of an existing class, or model you've already made, but shown from an unusual, but flattering angle, or set in surroundings or lighting that really show it off.
Think of the Enterprise leaving spacedock in The Motion Picture; the launch of the Enterprise-B in Generations; the first appearance of the Vulcan ship Ti'Mur in Ent: "Breaking the Ice"; or the Galaxy bearing down on the Cardassian weapon platforms in DS9: "Tears of the Prophets".

So, that was the challenge I set at the beginning of September.  I didn't have a clue what I was going to do as, while I enjoy doodling and sketching starships, turning them into a finished piece of art is another thing entirely.
I chose this theme mainly because many of the TrekBBS Art Forum posters create photo-realistic starships (interiors and exteriors) by manipulating zeros and ones in mind-boggling computer programs, but don't often enter the art challenges.  I think part of the reason may be that they're already working on their own CGI starships, which doesn't leave much time to work on something separate which is not always conducive to including the aforementioned starships.  So, I had hoped that this might entice some of them to join in.  And it worked.  Kind of.
Seven people created pieces of art for this challenge, compared to only two for August's A Trek on the Wild Side theme (the entry other than mine featured a Starfleet shuttlecraft), five for July's Unseen Scenes (one entry included starships), and four for May's Starfleet Needs You! (no starships).  There were seven entries for June's Isik For Your Thoughts though, but none of them included starships - it was all about the money (an isik is a unit of currency in Star Trek)!

Anyway, I started thinking about the Enterprise-B (on the left, there), and wondered if I could create something in that vein.  A sleek, powerful starship, but with unusual details, perhaps?  Something ornate or intricate, or in a non-traditional colour/finish? 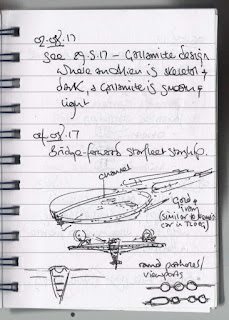 Then I remembered this sketch I did (on the right) last year.  While very rough, and with few design notes, I wondered if I could somehow concoct a painting or pencil crayon picture of an ivory (the colour, not the tusk!) or porcelain starship, with pewter or gold embellishments like Captain Nemo's stylish submarine, Nautilus (and his car!), from the much maligned film, The League of Extraordinary Gentlemen (Oh, and Mina Harker).
After much dithering and procrastination, I gave up on the idea as I knew I'd never see it through to fruition, never mind get it finished in time for the end of September!  As I had nothing else in mind, I resorted to taking some photos of my six little model Federation starships in the hope that inspiration would strike when I looked at them.  It didn't.  Well, not right away.


Sunshine and yet more procrastination put paid to my next, rather time-consuming idea which was to cover the Budapest with ivory-coloured paper and draw on the aforementioned embellishments, so I resorted to messing about with the photo above instead.
I finally joined the 21st century and employed an image manipulation program - FotoSketcher - in an attempt to turn my hastily shot model into something approaching art.  Here are some of my very early attempts: 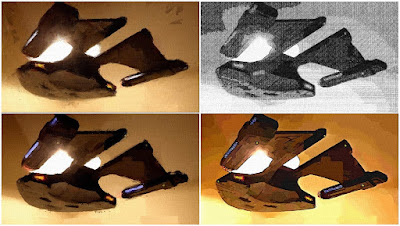 Pleased with the results, I took some better photos and tried to do a better job in MS Paint of removing the stand and adding the lights and glows before fiddling around with it in FotoSketcher. I thought I might actually have something to enter after all!


The silhouette below was actually created after I'd created what would be my final piece.  I knew I shouldn't have messed around anymore, as I now had another image that I liked.  Fortunately, I'd neglected to add the glows of the warp nacelles, impulse engines and windows/portholes, so deciding not to go with this image was made easier.

I call this one "Derelict" as it's just the hulk of a Norway-class ship drifting inside a particularly dense nebula (or planetary disk).


So, after dozens of photos, plenty of mucking about in MS Paint, and a couple of hours or so fiddling with FotoSketcher, I finally had an entry for September's Art Challenge:


I call it "Two Soups" after the hilarious Victoria Wood sketch starring Julie Walters, Celia Imrie, and Duncan Preston.  Why?  Because the Budapest looks like its flying through a good old fashioned pea-souper of a fog and, no sooner had I thought of soup, than the classic sketch popped into my mind.

Posted by Inexplicable DeVice at 16:02