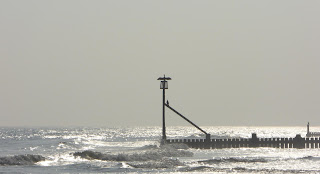 Here we go with part two of my September snapping. And what better way to begin than with a cormorant - I'm nothing if not consistent. Except when I'm not, of course...
Anyway, what follows is another four days worth of photos from the beach and the woods.
Try not to fall asleep those of you at the back...

Labels: Broom, Norfolk, Triffids and such


Due to the Frogbot-related nincompoopery of the last few posts, you may think that you've escaped the tedium of dozens of photos from my, by now totally predictable, beach, garden, and woods related escapades. Well, think again!
Despite the Frogbot induced wailing and gnashing of teeth, I have had time to get down to the beach and take enough photos for one or two slideshows.
Now, this might feel like 900 photos, but I can assure you that there are certainly no more than 890-odd... No, this is my 900th post! And it's only taken eleven years to get here...

Right. on to the photos. And because there are so many, I'm going to split this post up into the days that the photos were taken, and only post half of them now. Part Two I'll publish in a couple of days or so. As ever, click to embigulate!


OK. We've come to a decision. And, somewhat miraculously, no SubCs got hurt, no brain cells were fried (yes, "fried", not "fired"), and the dithering was kept to under a week!

With thanks to ErosWings - who has also been blighted by the 'bot - we've decided a) not to make this blog private, b) to republish all previously infected posts just as they are, and c) to just put up with Frogbot as something like a force of nature (albeit a very annoying one) and ignore the falsely inflated stats. This will also stop Witchface from putting out a bowl of HTML every evening in the hope that Frogbot will go for that rather than our posts...

Posted by Inexplicable DeVice at 15:39 8 comments:


The dratted Frogbot and its fixation on certain posts by regularly viewing them every half hour or so, has forced us to rethink the purpose of this blog. We'd like our musings and adventures over The Cusp (sparse as they've been lately) to be out there for all to see. But other than what microscopic bit of notoriety this has brought/may bring — and the possibility of of being paid shed-loads of cash for book/film deals (also very sparse) — we're prefectly happy for just a select few as an audience.
We've asked ourselves: Why do we care if the Frogbot artificially inflates the viewing figures of certain posts? It's not like the blog gets many views anyway. I, the Host, like reason and order, or, at the very least, something I can understand even if on first inspection it makes no sense. Plus, I also like the stats to serve a purpose and mean something. I like to see which posts are popular — not that we really do much about it. It's not like we go out of our way to publish posts with content that has been popular previously. In fact, what the stats tell us is pretty much ignored (especially by Witchface)! But that doesn't mean that I don't like to have a peruse now and again.

I think trying to ascertain the Frogbot's reasons is futile. It's a 'bot, so trying to understand its actions and reasons in order to develop a counter to it will probably be a big fat waste of time.
So, with this in mind, we're considering making the blog private for the forseeable future.
While we're bickering amongst ourselves deciding, we'll republish the posts that the Frogbot has infected that have been reverted to draft, but with mirror titles and at different times to the originals. Well, I say "we", but Witchface is all thumbs when it comes to this type of thing, so I'll end up doing it.

Ha! You're not that much better, yourself!
Oh, shush, you.
I'll also add the existing comments as images in a little gallery at the end of the post (like this). Then, if or when we do revert this to a public blog again, we may reinstate the original posts and delete the mirror copies.
And if this post turns up with a mirror title, you'll know it's been infected, too.
So, let us know in the comments, or by email, if you'd like an invitation.

Either the email address in our profile...
...or my private one which some of you know.
We're not going to automatically assume that all current commenters want a piece of the action as you may have been looking for an excuse to wash your hands of us, so this could be your chance to get away from it all!
This is also an ideal time for any lurkers to make yourselves known if you'd like to continue lurking in private. Don't say we never give you anything!
We'll leave this up for a week — or two (you know how indecisive we are) — to let you all see what we're planning so you can (in)act accordingly. In the meantime, we'll visit your blogs as usual.

Oh, and Frogbot? If you're watching:


::
EDIT 20:50 16.09.2016
Thank you all for your support (gosh, sounds like something much more serious than a Frogbot infestation has happened, doesn't it?).
I (the Host) have to let you know that our bickering has turned into dithering because a) I've discovered that making the blog private means that you all have to have some sort of Google account (probably Google+ - something I'm too wary of to sign up to, so why should I expect you to?), and b) Witchface's SubC has started to feel sorry for the Frogbot because it probably doesn't have a choice in what it's doing, and is probably cooped up in a battery farm somewhere near Quimper or Brest with a load of other hard-done-by and put-upon 'bots. We might just leave things as they are, and let the 'bots roam free throughout the blog (or at least the posts they appear to be trapped in), and never look at the stats again!?

I was going to ask if anyone else has any ideas, but that would just give us more fodder to dither over!

Posted by Inexplicable DeVice at 14:25 19 comments:

Labels: I We Me Us, Public Service Announcements, Swearing


It seems that Rubbish Creepycous-cous has attracted the attentions of that diabolical French 'bot. I'm not entirely sure at this point, though, so I'm going to leave it up for another day or two before deciding whether to revert it to draft or leave it published.
In the meantime, here are a couple of pieces of music that have taken my fancy lately.

I only clicked on ONSEN's Follow the Numbers because that's Gates McFadden looking concerned/wistful - the USS Enterprise's Doctor Beverly Crusher!
I wasn't expecting to like the music, but I actually do. There's a little bit of background about how Gates came to star in this video here.

The detritus from her party was scooped up. Burst balloons, paper plates, cake crumbs and unwanted party favours. Tangled up amidst torn and crumpled pass-the-parcel wrapping paper and shiny gold ribbon tied to deflated balloons was her doll, the one she'd had since her last party.
All of it went in the bin.
The next morning, the binman arrived and began to empty the rubbish bins. From a tear in a cheap black plastic binbag fell a forlorn doll, with cake crumbs and butter icing dulling its glossy hair, and jelly and icecream stains on its pretty little summer dress. The binman picked up the doll and looked into its cold plastic eyes.
Then he set her down and watched as she hesitantly crossed the path and ran off into the woods. The binman gave a little smile and then resumed his work, humming a poor rendition of a TV show theme tune as he did so. 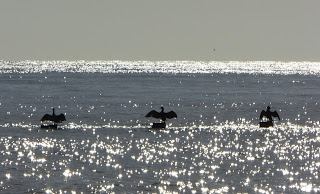 ... although, sometimes no amount of gilt can make a cormorant look good or obscure its bodily functions, as will become evident below.


These are just a few photos from this morning's swim at the Overstrand/Sidestrand border: