Just got time for a quick update of books read since the last book post.

This was a fantastic read! Thrilling, gripping, emotional, and believable. I actually choked up in a couple of places because I was so engrossed and invested in the plight of the only man on Mars.

I can't wait for the film, now.

This is the second book in this series about the discovery and exploration of parallel Earths. It continues the adventures of Joshua Valiente "the Hero of Step Day", Monica Jansson, Sally Linsay, and Lobsang the Tibetan motorcycle mechanic reincarnated as an Artificial Intelligence. New characters include Maggie Kauffman, captain of a twain (airship); and Nelson Azikiwe, a former vicar.

I think I saw a review on io9 for this anthology, but I can't find it to link to just now, so may be I saw it somewhere else?
Anyway, this book collects 13 short stories in which one of the main characters happens to be gay, or at least have some sort of homosexual experience but which isn't the focus of the tale!
There are some weird, dark stories amongst this collection, some of which I didn't much care for, but a few I found to be quite fascinating: The Oily Man by Alex Jeffers - a period piece about a man in a foreign land who is visited by a local "monster"; A Gift In Time by Maggie Clark - a tale of a man capable of time-travel who is infatuated by his boss's assistant; and Werewolves of Northland by Patrick Pink - a very sweet story of the only werewolf in a small town discovering another like him.

The third in the Seekers series was a non-stop action and adventure story about the USS Sagittarius crew's discovery of a world where the laws of probability have been shot to Hell! The writing (as always from David Mack) is excellent, and there's some great character work, but I just couldn't believe in the premise.

This was by far a more interesting read than The Long War - The story was neither here nor there for me, but the discoveries that Captain Kauffman and her crew make while traversing the Long Earths, plus the discoveries made by Sally Linsay throughout the Long Mars were riveting.


Posted by Inexplicable DeVice at 11:39 9 comments:

A reason to be a witch


After the excitement of all those pens, pencils and papers, there's nothing much to report here. The Host assisted Indescribable and Babyzilla to return from whence they came yesterday.
They were here camping, so Inexcuseable's husband helped them pack up and I kept Babyzilla amused and out of the way. I've also been doing some maintenance both here and at The Parents'.
And we've just got back from the woods behind Castlette DeVice in Northrepps. Here are some photos, to prove it (as always, click to enhance): 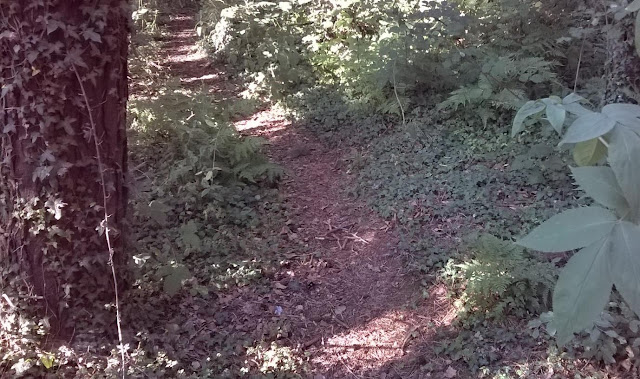 Labels: I We Me Us, Norfolk, Relativity, Triffids and such, Witchcraft

Pens: The best friends you can have!


Following hot* on the heels of LX, Dinahmow and Ms Scarlet, I hereby bring you the Pen Meme. But first, an introduction from Pauline Campbell Jones:

Of Brownies and Bees


It was all go here on Thursday. One of my Hags had come to visit, but no sooner had we settled down to gossip with tea, coffee and homemade brownies, when we were rudely interrupted by a low, loud droning noise. In less than a minute, we could barely hear ourselves think nevermind take notice of the juicy tidbits of gossip we each were disclosing. There was only one thing for it: We had to investigate.

Vacating the comfort of my hurriedly tidied living room, we grabbed our brooms from the umbrella stand in the hall and left the house (via the back door, naturally). A quick and low flight amongst the tree tops brought us to the cliffs and the lighthouse, and there, heading slowly along the cliff edge towards Overstrand was the source of the noise: the most enormous bee we'd ever seen!

Two Months 'Til The Tinfoiled Ten!


As promised, here is the first reminder for the be-tinfoil'd 10th anniversary of my arrival here in the 21st century-
And of this blog!
Yes, that too. I hadn't forgotten.
Good, because it's the blog that has made all this possible.
OK, OK! I said I hadn't forgotten. My, you are a bit mardy this morning, aren't you?

Anyway, getting on with the show: The 9th October this year will be the 10th anniversary and, as we mentioned before, we'll be holding another Tinfoil Hat Competition to commemorate the auspicious occasion.

I still haven't decided on a theme, so anything goes - Let your juices run wild! Your creative juices, that is, as tin foil is notorious for not having the capacity to mop up errant spillages...

In through the Out door


This morning I was so distracted by the hulking blond delivery god at work, that I walked in through the out door (think more "Raspberry Beret", by Prince, rather than the titular 1979 album by Led Zeppelin).

As I approached the office, the shrunken lump of coal I call my heart skipped a beat when I saw a white van outside. He's here! The only thing that makes walking into the building pleasurable. Yes, I know I'm objectifying him, but I don't know his name and I'm certainly not going to talk to him, so what're you going to do?


Ug. I've been invited to a gathering, a cauldron party*, and I can't get out of it. To make matters worse, I've been given a recipe for a potion or somesuch that I'm expected to bring.

I'd better get started as I'm due there in an hour.


Ingredients:
‡ Nightshade roots
- Hmm... I wonder which sort? Solanum dulcamara? Solanum nigrum? I hope it's Solanum tuberosa as I have a bag of Désirées that are starting to sprout...
‡ 6 fl ℥ of sour milk from a cow frightened under a full moon - Good gods. I can't wait until 29th August to scare a cow, so ::rummages in the fridge:: this sour cream with a use-by date of 31 July will have to do. It still smells OK, and the 31st was a full moon...
‡ 1 heaped tablespoon of an unbaptised virgin boy fat/cockerel egg emulsification - So, mayonnaise then. ::rummages in the fridge again:: And this one made from virgin olive oil is the closest to it that I've got to hand.
‡ Mentha longifolia, finely chopped - Ah. Horse mint. Well, I'm not going out for that now, so spearmint from the garden is going to have to do.
‡ Crown of Basilisk, finely diced - Well, I don't have any of that either, but I do have basil, so I'll use that instead. Dammit! I knew I shouldn't have put that newly hatched basilisk down the waste disposal unit.
‡ Allium schoenoprasum stems - What the- ? Oh, chives! I have these! Maybe this recipe won't be such an unmitigated disaster after all?

Now to concoct this diabolical recipe. Apparently, it only takes half an hour or so...


After all that, I've ended up with bloody potato salad!


* Very similar to a Tupperware party, but with less of that plasticky, stale air smell.

Posted by Inexplicable DeVice at 12:45 6 comments:


I need to make room on my bookshelves for an impending delivery of new Star Trek novels, and after practically no wailing and gnashing of teeth, I have decided to part with some of Witchface's treasured Houseboy collection.

Hey! How very dare you! Those are all priceless first editions!

First editions, maybe, but the only way they're priceless is because nobody in their right mind would pay anything for them! They're cheap and nasty tat that likely originated from some dire airport newsagent.

Oh, very well. They're free to a good home, so just help yourselves.