It's A Faaaake! Not The Art Of Star Trek - Seeing Double


Rather uncharacteristically, I've made a start on this month's Star Trek art challenge well before the last minute!  I thought I'd better set a good example as I was the one who came up with the theme to August's challenge (having won the July art challenge).  Here is my theme:


For this month's art challenge, I thought we could take a walk on the wild side.
Or a wild Trek, even!

I'd like to see your takes on anything wilderness-related in the Star Trek Universe: A landscape from Qo'noS, perhaps? Big game from Berengaria? A starship decked out in Greenpeace-equivalent livery rescuing a Gormagander? Or whatever those little creatures were that High Society Betazoid ladies used to imprison in their giant wigs!
As long as your piece of art showcases some sort of wildlife or its environs, it's in!

The reason why I'm publishing this "It's A Faaaake!" post before the end of the month/beginning of next month is that I need your help - More on this a bit further down.

Harkening back to 2017's Driven to Distraction and Foreign Relations "It's A Faaaake!" posts, I've cut out a few bits of coloured paper/card and fitted them together to make a couple of Starfleet officers to pose about in the countryside wilderness around Château DeVice.
I've chosen a Chandir ("Tailhead") and an Andorian, and dressed them in a version of my alternate universe 2373 Starfleet uniform for February's Art Challenge (as modelled by T'Cael & Ry'iak down there in the top right, with influences from my Starfleet Occult Operations design, bottom left). 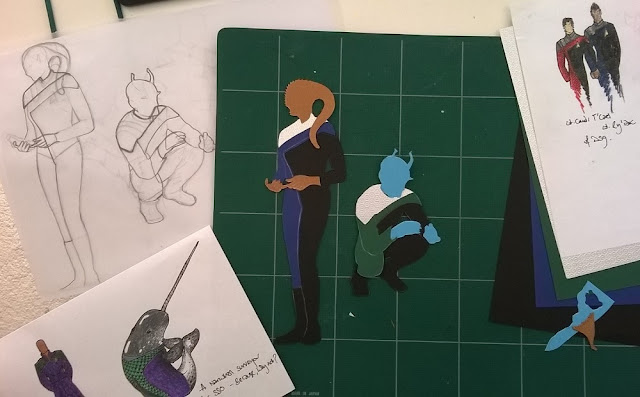 Below, my Chandir (standing) and Andorian (crouching) subjects have escaped their paper prison, despite being unfinished(!), and made it out into the garden. As I hadn't yet got around to furnishing them with tricorders and communicators, they have availed themselves of a divining rod and crystal ball (it's amazing what one can find laying about in a witch's garden) to aid in their bid for freedom... 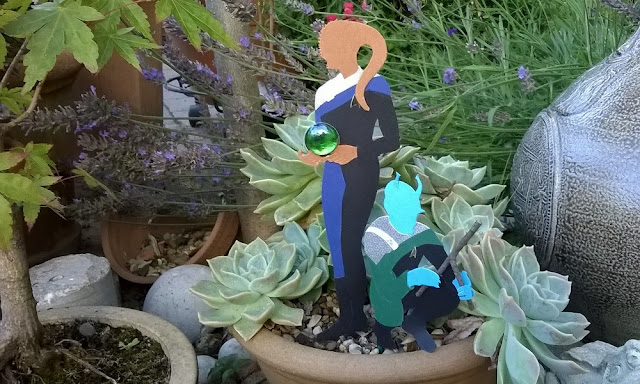 This is the bit where you come in.
This morning, I obscured myself and surreptitiously followed Lieutenant Commander Koromandis (the Chandir) and Lieutenant th'Thanticar (the Andorian) down the cliff to the beach where they were attempting to use the appropriated crystal ball and divining rod (as well as a staff that they must have picked up on the way) to find a way off this planet.  I took some photos as evidence, and I'd like your help in whittling them down.
The photos are in sets of two - the first of each set is unadulterated (apart from a bit of straightening and/or cropping), while the second has been tinkered with to adjust the brightness, contrast, shadow and highlights.  My useless eyes being somewhat colourblind, I'd like your opinion on which looks best, please.  And also which scene/s you prefer - you don't need to know anything about Star Trek (or even like it), I'm just after which looks most pleasing to you (or the least repulsive).
Feel free to critique like only an art critic can!  (i.e. devastatingly) 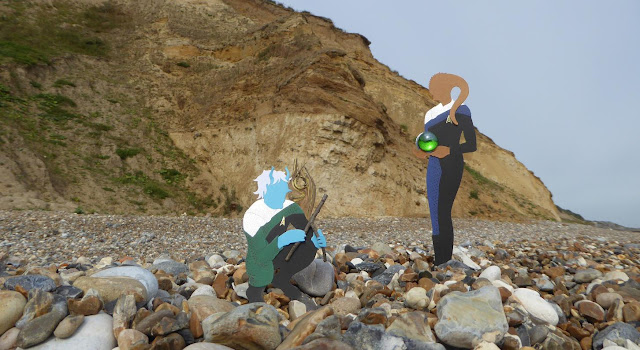 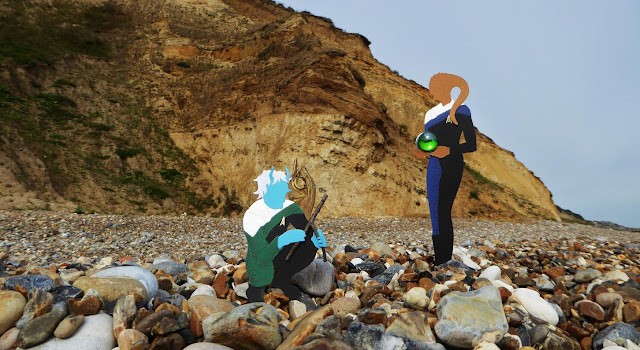 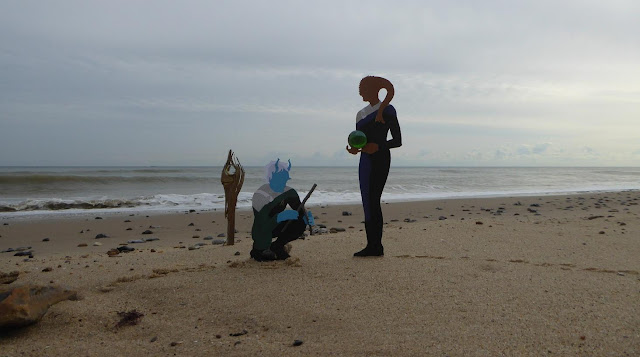 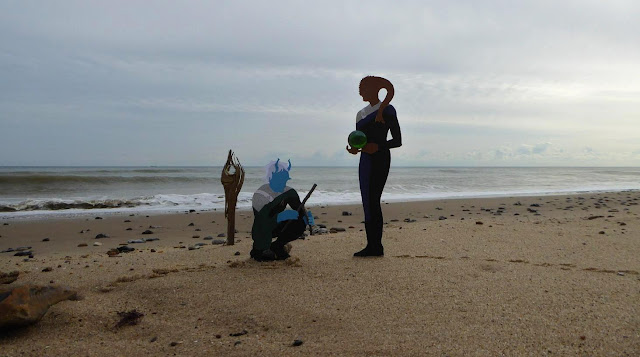 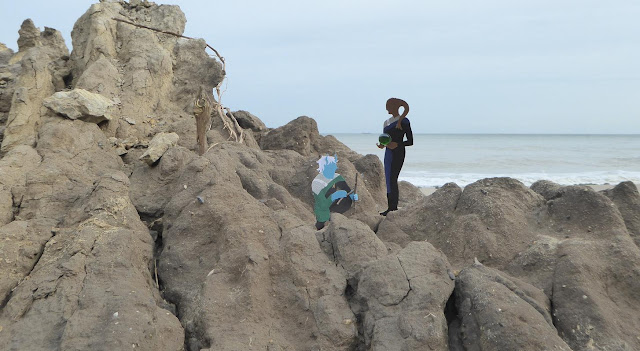 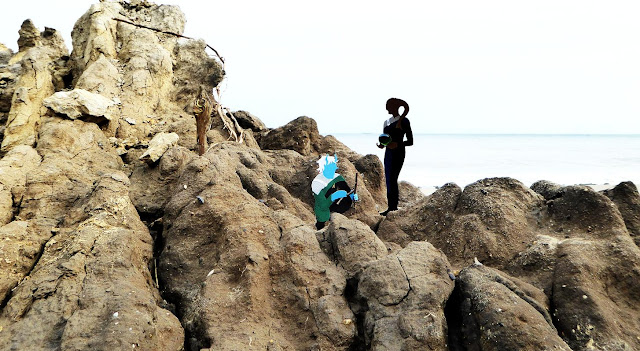 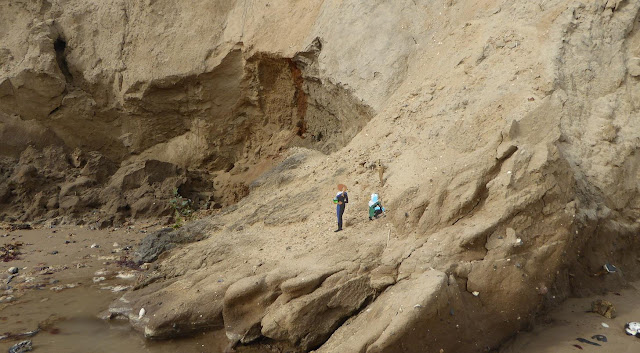 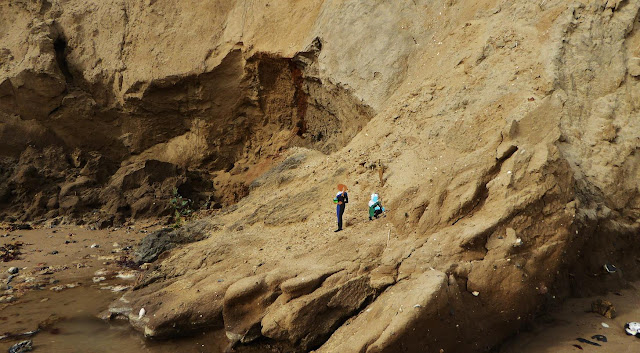 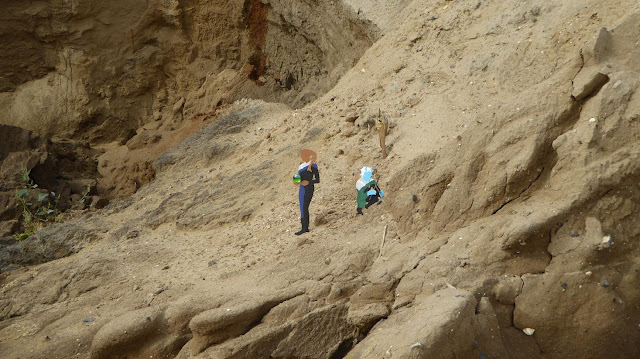 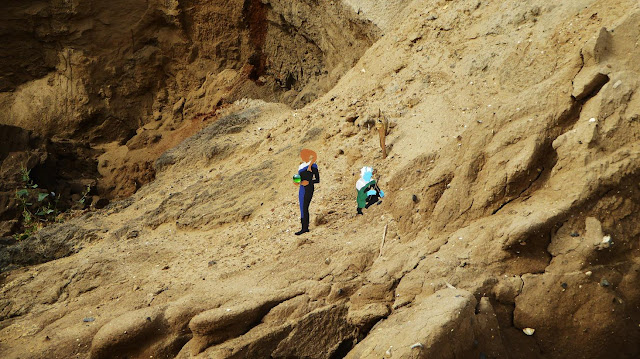 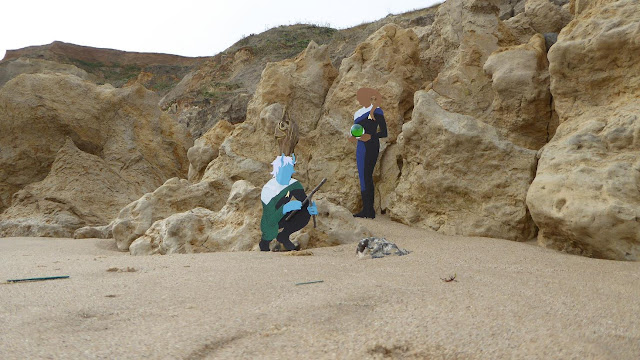 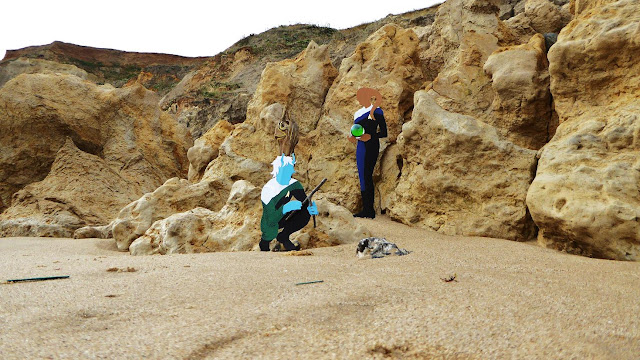 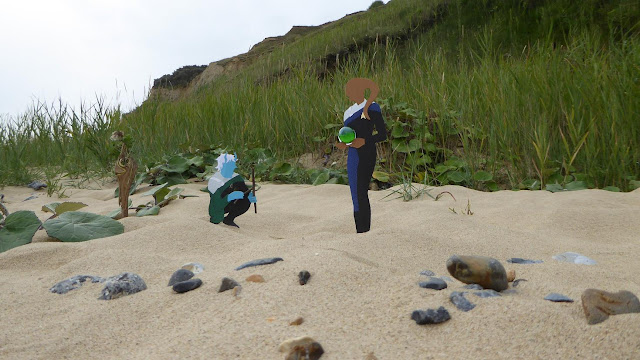 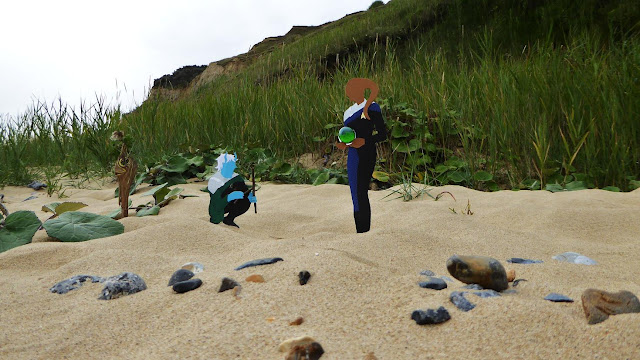 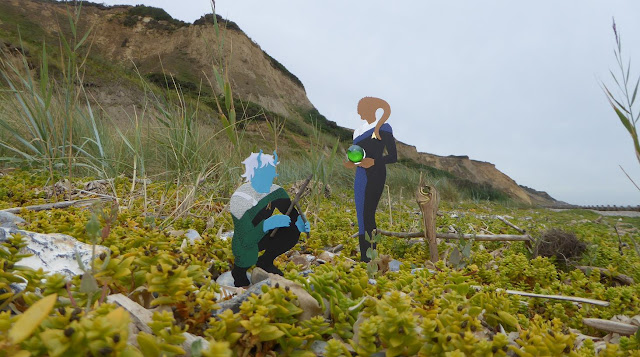 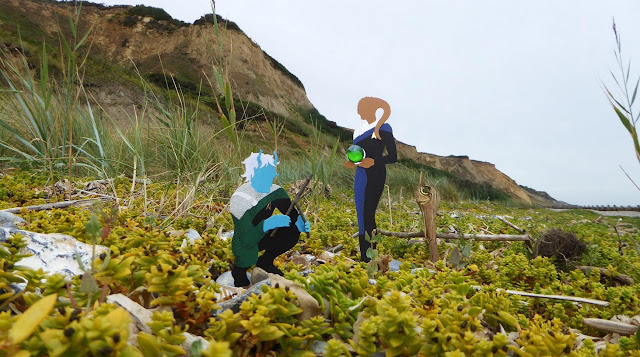 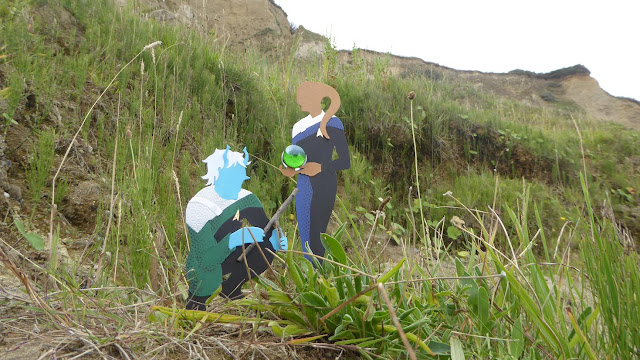 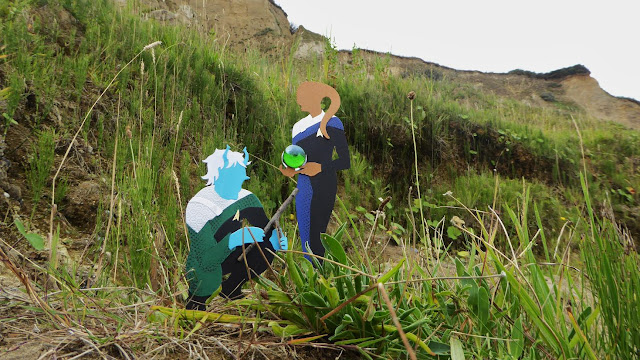 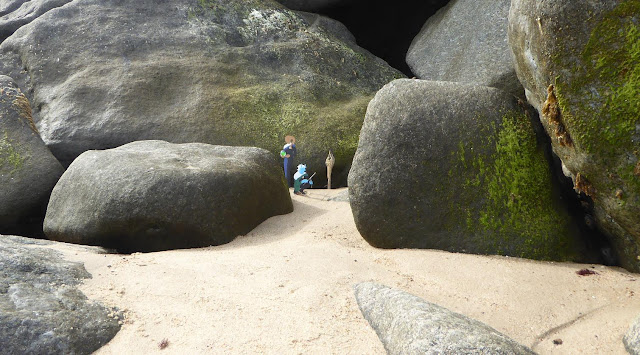 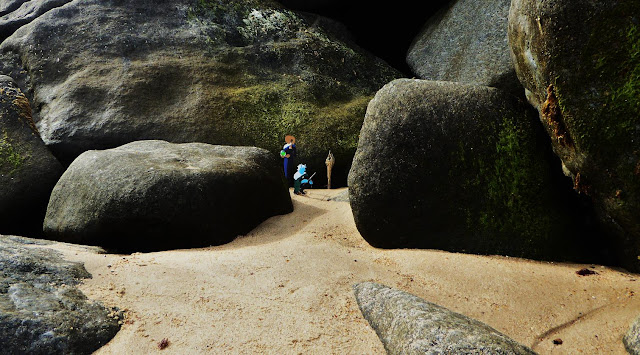 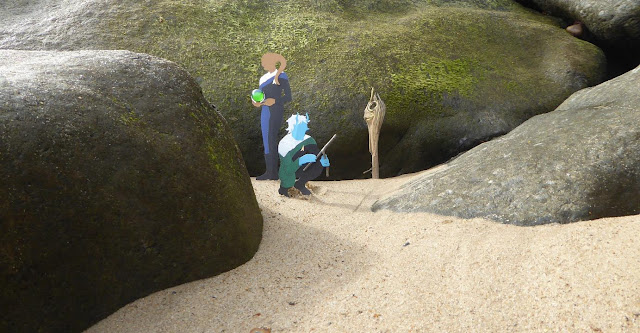 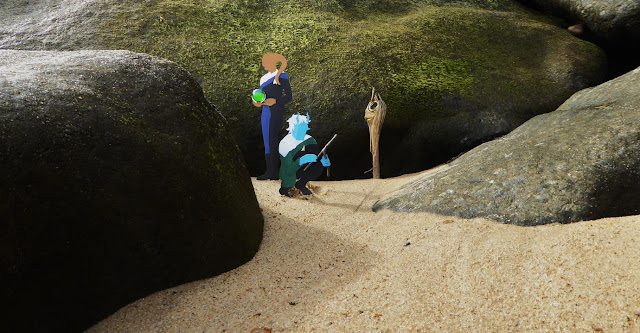 I have three or four favourites, and two or three horrors, but I'd like to see what you think before I let you know what they are (so I don't unintentionally influence you).

Continued in... It's A Faaaake! Not The Art Of Star Trek - Wild Things

Posted by Inexplicable DeVice at 17:33