Hello! Did you know, it's been nearly two months since I put up a Star Trek-related post?  Well, it has. So, I'm going to remedy that with this selection of Star Trek art. 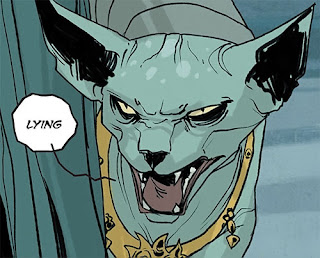 Oh, pay no heed to Lying Cat.  She's like a broken record.  Always spouting off that tired catchphrase.  Anyone would think it's the only word she can say...

Anyway, there is a point to Saga's Lying Cat featuring here - it's that she was the inspiration for the following two photomontage comic-style dalliances starring Deanna Troi.  For those who don't know, Troi is the telepathic/empathic counsellor and diplomatic officer aboard the Enterprise-D in Star Trek: The Next Generation (and my favourite character in that show), and could also tell when someone was lying (mostly).

Here she is with Doctor Beverly Crusher in the Enterprise's hair & beauty salon: 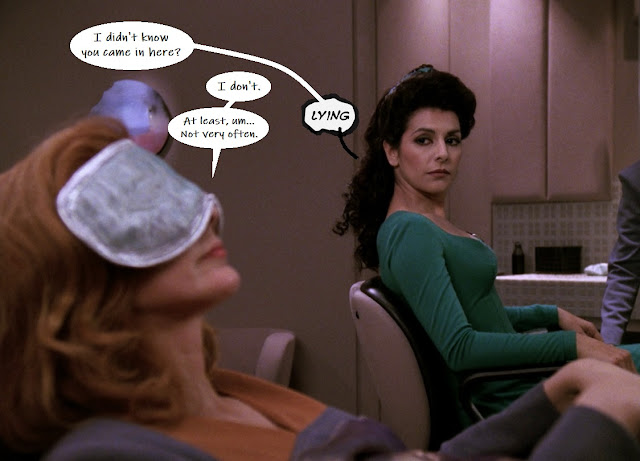 And here she is again assisting Captain Picard in the downfall of regular Romulan antagonist Tomalak: 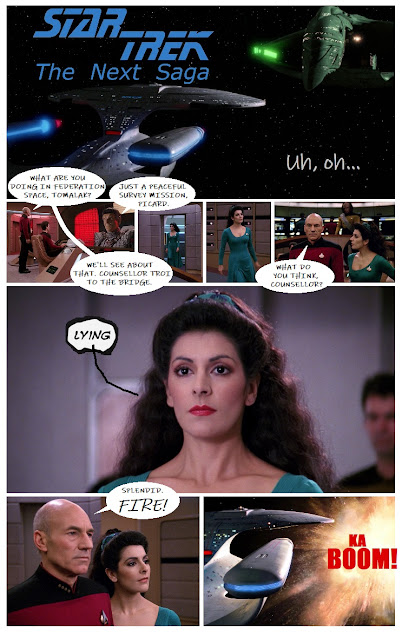 These were both created using screen caps from TrekCore back in 2018 for no reason other than a bit of fun.  The beauty salon image came from TNG season 4 episode "The Host", and the Saga crossover images came from TNG episodes "The Defector" (S3), "Galaxy's Child" (S4), "The High Ground" (S3), and "Unnatural Selection" (S2).  The "Lying" speech bubble came from the Saga graphic novel.

::
These two marker pen illustrations were for August 2019's Trek BBS Fan Art Challenge: Under the Sea.
This first one is a depiction of Aili Lavena meeting some squales on Droplet (a water planet), from the Star Trek: Titan novel, Over a Torrent Sea by Christopher L. Bennett. 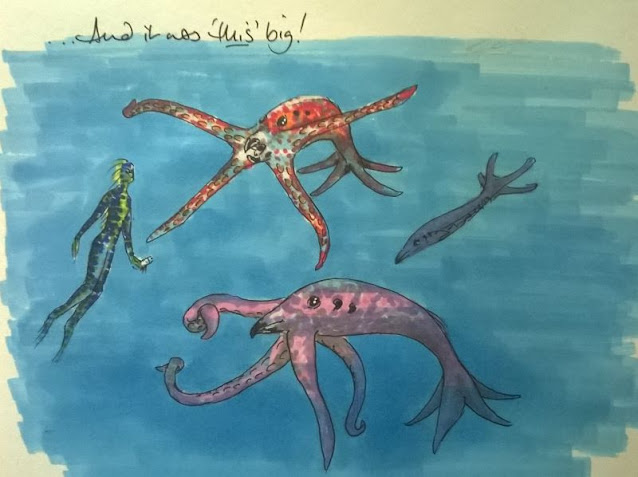 And this one is of Harpo the Humpback whale (from previous Art Challenge: Disco78), a dolphin and a Z-Ray/Sinker Zoid with a Federation Starfleet type 11 shuttle cockpit being observed by an Arcadian. 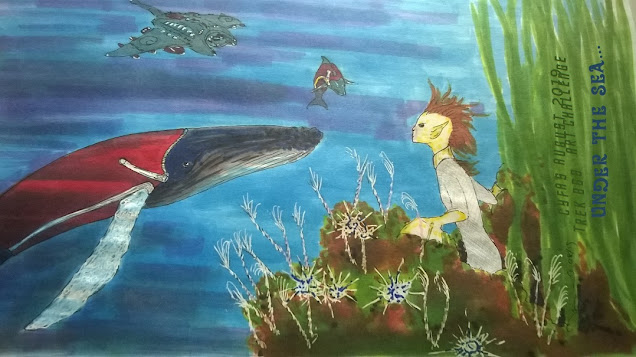 ::
Just some quick sketches of insects made up of starship parts.  I can't remember what these were going to be for, but they never progressed past this rough idea stage.

::
This Starfleet Intelligence shuttle is a very hasty mashup of one of Voyager's class 2 shuttles and James Bond's Lotus Esprit submarine "Wet Nellie" from The Spy Who Loved Me.  I did this for September 2019's "I Spy With My Little Eye" Spy Month art challenge at the very last moment. 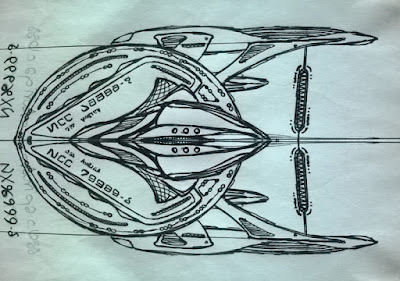 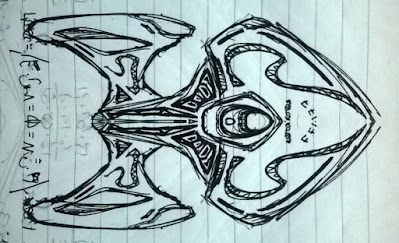 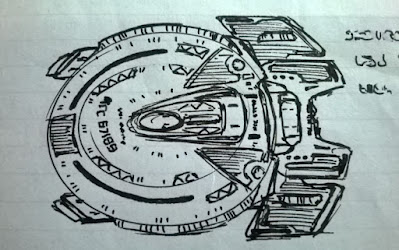 ::
This is a sketch I did back in August when I found myself with a little time on my hands:

I've been intrigued with this vertical-mouthed species for some time, and had an idea about how they eat - and this sketch is the result. I envisage their mouth opening and dozens of prehensile, worm-like tentacles shooting out to grab whatever food item is next on their stomach's agenda.
Needless to say, many humans (and other species) find sharing lunch with a member of this particular race a horrifyingly fascinating experience!
::
Ah... Here we have my favourite little box fox, the adorable Pop Fold Rutherford (from the brand new Star Trek: Lower Decks cartoon - that's not being shown in the UK yet!  Grrr... I'm having to read about it and watch clips at StarTrek.com to get my fix) posing on my desk and showing off my latest literary acquisition. 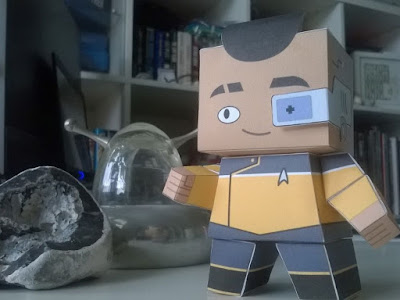 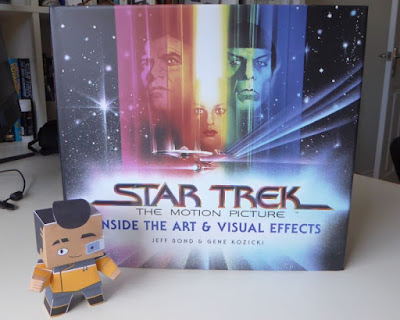 The Pop Fold template was created by Calvin Lin, and modified by Wayne Peters for Lower Decks characters.  I printed out the template and put it together over a couple of work lunchbreaks.
::
The last bit of Trek art is this quick cartoon for last month's Lower Decks themed art challenge.  Here we have a couple of lowly Enterprise crewmen clearing up after Captain Archer's dog, Porthos, and chief engineer, "Trip" Tucker who, fortunately for me (and many others) spends quite a lot of his time running around Enterprise in his underwear... 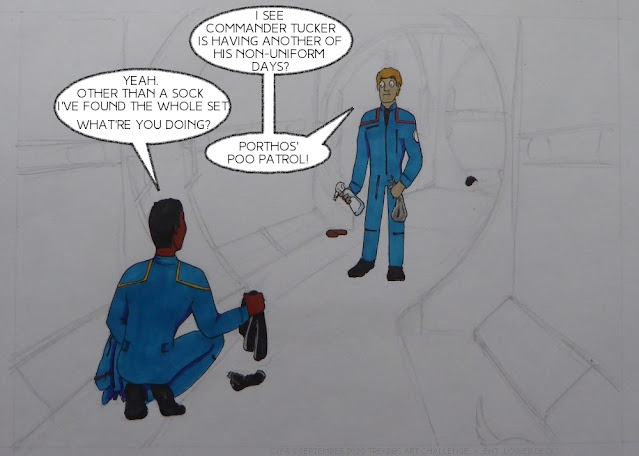 
Previously on Art Trek (née It's a Faaaake! Not The Art Of Star Trek):

Right.  That's enough of that.

Finally, I just need to remind you that the 10th INFOMANIAC Garden Photos Event is taking place here this year and you have until 28th October to get your photos emailed to us before the grand unveiling on 31st October.

Posted by Inexplicable DeVice at 16:18

Labels: Alternate, Books, Canvas, I We Me Us, Star Trek, Triffids and such, Very Mistress