Hello and welcome to the 2017 Tin Foil Hat Gallery, the fourth such exhibit seen over the years in this little corner of Blogland. This being the fourth collection of international chapeaux de tin foil, it seemed fitting that the theme also be "four". How you, the designers, interpreted the theme was entirely at your own discretion, and I'm very pleased with the diversity and alternative takes that made it into the collection.
An added extra to the theme, that of the rubber duck, came about via one of the SubConsciouses. I can't remember which one...

Hey! It was me!
Oh, yes. The Host's SubC. I might have known you'd be responsible for such an act of triviality!

Actually, it wasn't trivial. The rubber duck, in thought and form,
has been a part of this competition since the very first one back in 2010
(scroll down to the text below LẌ's [then known as xl] masterpiece for the reference).
I'd hardly call that a rubber duck of any substance!
And then, in the second collection in 2014, Tin Hat and Tales: Flights of Fancy,
Mago wowed us all with his creation: The Duck!
Fine! So the rubber duck theme didn't come out of nowhere, then. Hmmph...

(Thank gods Witchface gave up then, as I couldn't find a reference to rubber ducks
in 2015's 10th Anniversary Tin Foil Top Hats and Tiaras collection...)
What was that?!

[silence]
Hmmmm... Right, then. We'd better open the doors to the gallery and let you all peruse the 2017 Tin Foil Hat Collection: Tin-Four, Rubber Duck!

Holes with stones around them...

... and other seaside somethings. 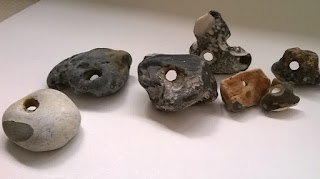 From my various perambulations along the beach here, I bring you a selection of seaside flotsam and jetsam that I deigned fascinating enough to bring home.
The thing is, all these pocket-fulls of stones and fossils and glass and shells are building up so that the interior of Chateau DeVice is slowly transforming into a beach... 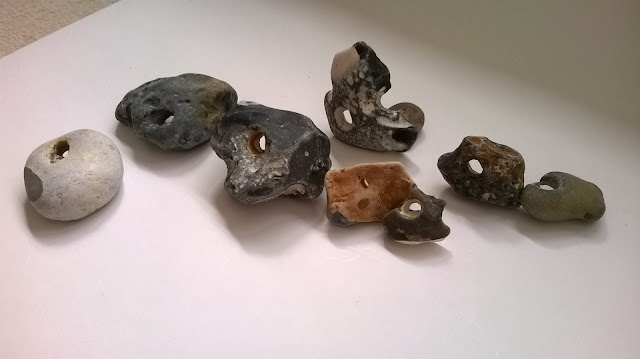 Labels: Norfolk, Not my usual fare, The Science Bit, Tin Foil Hattery, Triffids and such


No pressure, but we've received the first entry for this year's Tin Foil Hat Competition!

No, it's not "Sea Urchin" as constructed and modelled by Sir David Attenborough on the right here:
(We had to disqualify his submission as he had "help" from NASA)

You now have five days to submit your tin foil hats for entry into this illustrious competition (six, if you include the rest of today and a little leeway for the early hours of Friday morning to allow for time-travel nincompoopery).


Closing date for entries is midnight on Thursday 24th August.

Posted by Inexplicable DeVice at 14:31 22 comments:


You lucky, lucky people can breathe a sigh of relief: I've extended the Tin Foil Hat submission deadline by four working days (or thereabouts) to midnight on Thursday 24th August!  Mainly because I haven't had time to construct my own shiny chapeau yet, due to unexpected/unannounced/unnecessary visitations from Indescribable, the Little Witch and Grumplestiltskin; plus the eventual birth of Inexcuseable's first spawn on Monday morning: Spider-Monkey (because that's what he looks like at the moment). But also because some of you have resorted to time-travel to try and eke out a few more days of construction time...

This means that the Gallery of Hats will open on Saturday 26th August for a week of viewing and voting, with the winner being announced on Saturday 2nd September.

In case you're new here, or you've had a sudden attack of amnesia, the theme for this year's Tin Foil Hat Competition is "Four" (with or without a rubber duck). How you interpret this theme is up to you: You may wish to make four hats (sounds like too much hard work to me); take four different photos of one hat (that's a bit better); fashion your hat into the number four; adorn it with four items of decoration (or four rubber ducks); or go for something more subtle (or downright obscure), such as the four stages of metamorphism of the superorder Endopterygota (good gods!).

Remember: to enter, you must fashion a tin foil hat (with or without rubber duck/s), take a photo of yourself wearing said chapeau (or, if you are camera-shy, put it on a melon or other head-sized object) and send me the photo (email address is in our profile) along with a short technical description of the hat's functions (and what, if any, purpose the rubber ducks serve - if you included any), and/or a tale of fancy to go with it.
The winner will be whomsoever garners the most votes from you, the voting proletariat masses select, and displayed on this here blog. There will also be a (yet to be determined, but you can guarantee it'll be cheap) prize, or prizes.

Right. We'd all better get on with our hats then, hadn't we?!


Mago showed us his - and after a modicum of light pestering - I'll show you mine:

For those occasions when taking Broom out is not an option (i.e. in daylight, mostly), I can't be bothered to walk, and I can't justify a relatively short trip in Car (i.e. to Indescribable's temporary woodland abode), Bike is summoned to transport me, if not in style, then at least in relative efficacy.


There. That's that out of the way so you can get on with crafting your "four" themed Tin Foil Hats (with or without rubber duck/s). There's only one week left until the submission deadline (19th August), remember!

Posted by Inexplicable DeVice at 13:48 18 comments:

(To release the butterfly flavour, just tear open the tin foil pack and allow to stand for a minute or two. Then, to prevent waste, use the foil to craft a hat or four!) 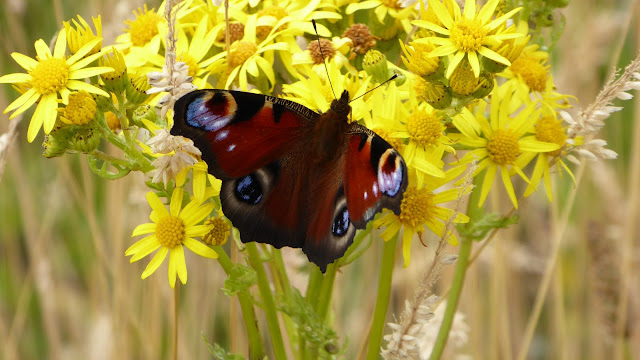 
I took Broom out for a daytime spin the other day-

I know, daring, eh?
Well, it was a bit. Anyway, we went for a spin and managed to get a few snaps-

When Broom wasn't wobbling alarmingly - and on purpose, too!
Quite. Anyway... these snaps may please Dinahmow, but add to the concern of Mago and Hound, and cause some vexation to Ms Scarlet (although she seems to have moved on from cormorants to cover fields instead...).

Because cormorants are so last year!
Anyway... We "enjoyed" a rather white-knuckle jaunt down the coast a little way, skimming the cliffs of Overstrand and Sidestrand as you can see here:

It's A Faaaake! Not The Art Of Star Trek - Walk Like An Egyptian


As promised at the end of the last post, may I present: Yet Another Star Trek Art Challenge Post!

Witchface did mention that this post would entail a trip to Egypt, but that was quickly recanted. And even if it wasn't, you should know by now that I barely leave North Norfolk (bloody work forcing me to go to Norwich...) never mind leave the actual country! Besides, Broom would have forty fits if I suggested travelling overseas...

Anyway, on with the post. Here's the challenge for July - as set by the June challenge winner - which explains the Egyptianess:


The theme for this months art challenge is Egypt. I was thinking long and hard about a couple of ideas for this month's theme, but ancient Egyptians, pyramids, mummies and hieroglyphs have always fascinated me since I was a child. It's just something that inspires me and I love to dabble with. I hope you agree that it's a broad enough theme for everyone to work in.

Maybe you can show us how the Borg would build their ships if they were Egyptians. Maybe you can reimagine familiar Treknology as Egyptian “steampunk” tech. Or maybe you'll let us see how Kirk & Spock beam down to a planet with a civilization strikingly similar to ancient Egypt. The possibilities are virtually endless.


8th - 14th July
Unlike last month, I got started on this challenge straight away with a list of ideas including: incorporating the various Egyptian gods hats & headgear into a Starfleet uniform; making the various animal-headed gods into Trek races; hieroglyphs as an alien language; the Egyptian ankh or Eye of Horus as an alien logo or emblem; sandpaper pyramids (as background scenery); USS Nile - a Danube-class runabout; the Eye of Ra as a starship's saucer-section; and possibly something involving Pteppic and Ptraci from Sir Terry Pratchett's Pyramids...

16th July
Nearly a week later, I decided upon one of those ideas, which was to construct a golden Cardassian Hideki-class ship and give it an all-over livery reminiscent of Tutankhamun's mask. However, knowing that a 3D cardboard model would have taken me ages to make (not least because of all the procrastinating I'd have to fit in), I thought I'd try a flat 2D one instead and started hacking away at some gold cardboard: