Art Trek: Into The Arboretum...

It's getting near to the end of the month, and with no other post even remotely near finished, I am going to subject you all to Star Trek art!  Although, hopefully this time, you might not skim through hurriedly as it's not overly Star Trekky.
Oh, and my pikhmit/pixmit cards won last month's Trek BBS Art Challenge, which meant that I got to choose the theme for this month's challenge:

It is Spring!*  Warmer weather and longer days bring new growth, spring flowers, and the promise of brighter days ahead.  Inspired by a weekend spent out in the garden, the final episode of ST: Picard, and recent Trek art by Donny, ashefivekay, and Dryson, I've decided on a floral theme for this month's art challenge.

I'd love to see your interpretations of flowers & plants in Trek, whether it be a look inside a starship's arboretum, the plantlife of a Trek race's homeworld, a Kressari botanical cruiser, a bunch of flowers given by one crewman to another, or something else.  Whatever it is, make it bright and colourful!

* In the northern hemisphere, at least...

Right.  On with the show: 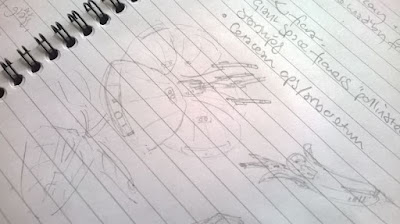 A couple of days after setting the challenge, rather than strike, inspiration sauntered vaguely by and I managed to sketch out my ideas so far: a giant space flower made of starship parts (above), and a more traditional starship arboretum filled with non-traditional (and even a few non-Trek) botanical specimens (below). 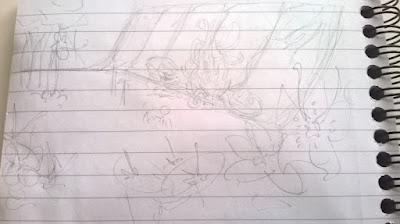 Five days later, I'd made only slightly more progress: 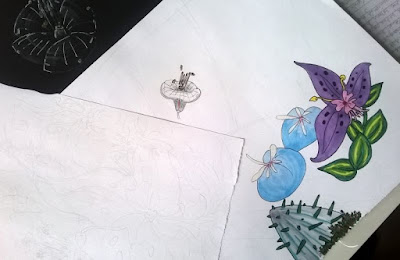 But by halfway through the month I knew what I was going to do and had, in fact, half finished it: 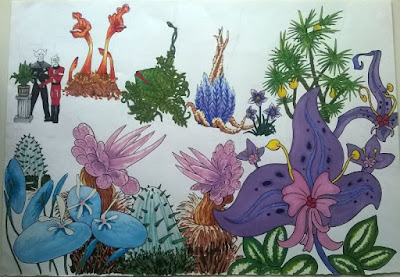 (Un)Fortunately, Saturday morning (the 18th) brought rain which thwarted my plans to get out and work in the garden, so I worked on my indoor garden instead.  Yes, I finished my arboretum!

Packed into this arboretum are nine plant species from on-screen Trek, and one from Gold Key Comics.  Then there are the interlopers from other realities - five in all.
If you want to have a guess or know some/all of these plants, please give your answers in the comments.  But for those who can't be arsed with all that, just highlight the blank space below to reveal them.

If one was to wander along the path from right to left (front to back), on your left you would see:
On your right you would see specimens such as:

Because I'd finished so early in the month, I thought I'd start something else - an idea similar to the first one I had.  But instead of giant flowers made of starship parts, these flowers (and other lifeforms) are actually machine lifeforms which may be harvested to make starships (and other spacecraft).
This quick sketch is of Deflector Lilies (and their saucer pads) along with associated lifeforms - Warp Shuttlefly, Workbees, Shuttlefish, and Naceels. 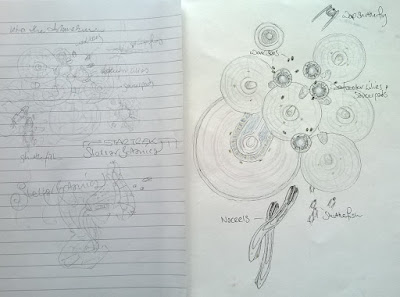 The intention is to come up with a watercolour (or pencil crayon) illustration for an encyclopedia of space-based plant life - Stellar Botanica - but I don't know if I'm going to have much time to work on it (the dratted sun's out - again! - which means I simply must get out into the garden and sort things out before the end of Spring).

Now, with this post you are really spoiling us you may have noticed the change in title from It's A Faaaake! Not The Art Of Star Trek to plain and simple Garak Art Trek.  This is for two reasons: One, because the four second clip of Senator Vreenak - the Romulan who hisses "It's a faaaake!" - has been taken down from YouTube; and two, because I've grown to dislike the "Not The Art Of" part (as in "Not The Royal Wedding" and "Not The Hats of Barbara Cartland").  While my art isn't official Star Trek art, it is, on the whole, intended to be actual Trek art rather than a parody, hence the more "legitimate" (for want of a better word) title.

Anyway, Previously on Art Trek (née It's a Faaaake! Not The Art Of Star Trek):

Posted by Inexplicable DeVice at 11:56