Last Friday night I broke with tradition and went out.  And didn't get back to the comforting embrace of Château DeVice and into bed until almost the Witching Hour!
Have no fear, though.  I wasn't out on the lash or terrorising the neighbourhood as I might once have done in my yoof.  No, making the most of the first clear late evening/early night sky in what feels like months, I wandered up Madam's Lane (not a euphemism) with Camera and took some photos as the stars came out.
As it was too dark to use Camera's panoramic function, I had to resort to sticking two photos together to get these wider shots spanning two compass points.  Apologies for the rather noticeable join lines - I'm sure there must be some sort of software for smoothing them out, but that would entail me knowing about such things and being able to use it!  Oh, and another thing: apart from the labelled photos, I haven't engaged in any editing/brightening jiggery-pokery with these images - they are just as they came out of Camera (which is why the stars are so dim).

From left to right, this is the view West to North at just gone 10pm (not long after the sun had set).  As there was still plenty of light, I only set Camera's exposure time to 15 seconds rather than the usual 30 for night sky shots.

Above we have the view East to South over the fields. Delphinus is slap bang in the middle of the left side, but so faint as to be barely noticeable. Altair, the primary star of the constellation Aquila however, is very noticeable right in the centre of the whole image. 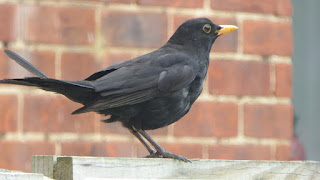 As you can tell, this is not a geologically fascinating chalk bed (non-geological fascination may vary and is not guaranteed) as alluded to in my last post, but an alert blackbird of the "you little turd" variety.
Yes, the vile little bastard has spawned yet another brood of unspeakable evil as the following photos will illustrate.  The only good news is that they seem to be running Beaky ragged! 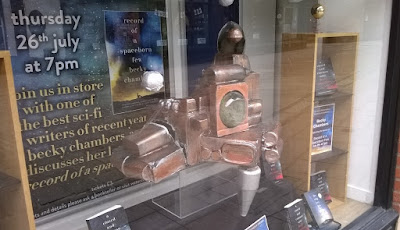 I walk past Waterstones (a bookshop) on my way into work, and they usually have some sort of window display for a featured book.  This month I was pleasantly surprised to see the Wayfarer from Becky Chambers' absolutely splendid The Long Way To A Small, Angry Planet (as read here, here but not here) taking centre stage.
While not quite as I imagined it, the Wayfarer is at least recognisable with its tunnelling bore (the drill-like silver pointy thing hanging from the bottom), and the "fishbowl" (the clear dome that houses the garden and kitchen).
As you can see, Becky Chambers is coming to Waterstones in Norwich on the 26th July as part of a publicity tour for her new book Record Of A Spaceborn Few which is published next month.  I can hardly wait!!!!

Labels: Blogorati, Books, Familiar, I We Me Us, Norfolk, Triffids and such


Today I've been lumbered with both nieces, The Little Witch (who is currently laying on my bed watching Ladybug and Cat Noir on Netflix to keep her out of my hair) and Von Smallhausen*, so I haven't had much time to do anything except post these photos from Tuesday night's sunset from Overstrand Beach. 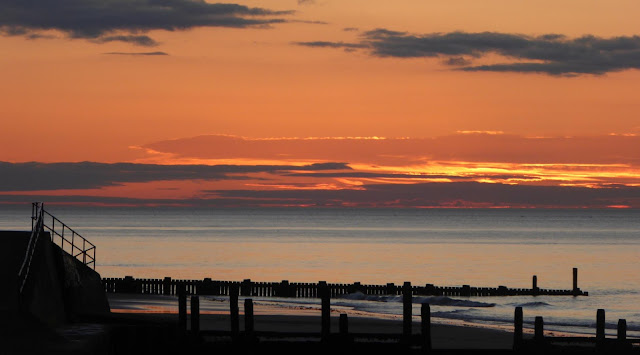 Labels: Norfolk, Relativity, Triffids and such

"I'll drive you round the bend"


I was driving home from work yesterday, wondering whether I could be bothered to wash Car after I'd had tea, when the thought of Eros' bird shit-covered car popped into my head.  Then I wondered what kind of car Eros drives.  Which led me to wonder what cars the rest of you drive.  If you drive, that is?

Aside from her cavalcade of Mistress Mobiles, we know The Very Mistress gets around upon some sort of velocipede:

And while Ms Scarlet is partial to a flying bath mat (of the octopus sucker variety), Mago ferries a van load of children around the Franconian towns and countryside, Norma gets chauffeured around in Ruth Buzzi's Lincoln Continental, and LẌ enjoys a spin in the Space Shuttle now and again, what method of terrestrial transportation do they avail themselves of when not flying to George Clooney's Lake Como retreat/working/avoiding flying saucers/visiting Princess?
And what about the rest of you?  What cars do you drive (or get driven around in)?  And if you don't drive, what is your preferred method of transport?

Tears of a Clone


From the extensive gardens of Château DeVice this very afternoon...

Gay of the Triffids


It's been somewhat damp here in Overstrand lately, and as I hadn't been up to the allotment for a week or so, I thought I'd better pay it a visit in case the moistness had encouraged weeds to proliferate.
In hindsight, I should have checked my crystal ball first...

Labels: Alternate, Triffids and such


Inspired by this - the blade looking like it's made of sky - and because I haven't done anything a bit arty for a couple of months - since the Narwhal in a Spacesuit, really - I have eased my way back into the world of creativity by combining my extremely amateur photography, the North Norfolk coast, and Star Trek.