However, don't start celebrating just yet, as in its place is a load of other (mostly) old sci-fi properties that you probably couldn't give two figs about either.  Such fun!


Welcome to the August 2020 Art Challenge — the 189th edition, for everyone who's taking count. That's 17 years of art challenges, with a majority of them focussing on Trek. Well, this month shall look a little different, because the theme is called Not Trek.

If you're anything like me then Star Trek isn't the only sci-fi universe you feel comfortable in. Well, this month is all about that. Basically the only requirement for your entry is that it somehow features a sci-fi entity other than Star Trek. Maybe you are passionate about Star Wars, Babylon 5, Battlestar Galactica, Red Dwarf, Doctor Who or The Orville. Or are you more into obscure stuff like Cowboy Bebop, Odyssey 5, Charlie Jade or Sliders? Anything goes, as long as its within the genre.

Farscape instantly popped into my mind when I first saw the theme, then later on while in the bath (where I do all my thinking) I came up with this list (WARNING: Almost all the following links are to YouTube clips/trailers):

Ulysses 31, G-Force: Battle of the Planets (Gatchaman), Flight of the Navigator, Asgardians of the Galaxy (because I can't decide between Thor and Guardians of the Galaxy), Transformers (UK G1 comic and toys), Zoids (UK comic and toys), John Carter of Mars (Disney film, because I still haven't got around to reading the books), Jupiter Ascending (Bees! Gravity boots!! That wedding dress and hairpiece!!!), Primeval (Dinosaurs!), Day of the Triffids (the nightmare inducing 1980s BBC TV series), and The Tripods (I couldn't find a non-blurry clip with the original music, so here is the actual theme). Rather typically, I couldn't decide which properties from the above list would make the cut or not, and I "accidentally" thought of a few more (which explains the Trillions and the waterlily homunculi from Les Maître du Temps).  After much procrastination and dithering, I finally made a start on my Not Trek Art Challenge piece - and promptly ruined it by hurriedly colouring it in after a couple of G&Ts...
Here's a pre-gin snippet which includes a couple of party-crashers not on the original guest list: 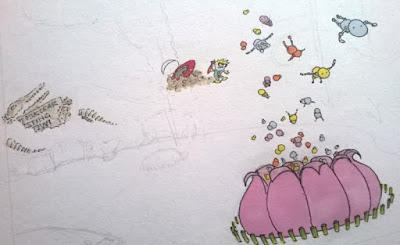 I intended to re-do the scene above but, instead, I got distracted after getting my old box of Zoids out to find Hellrunner (the ornitholestes-type Zoid in the sketch from 12th August, above) and ended up with the photo-story below: 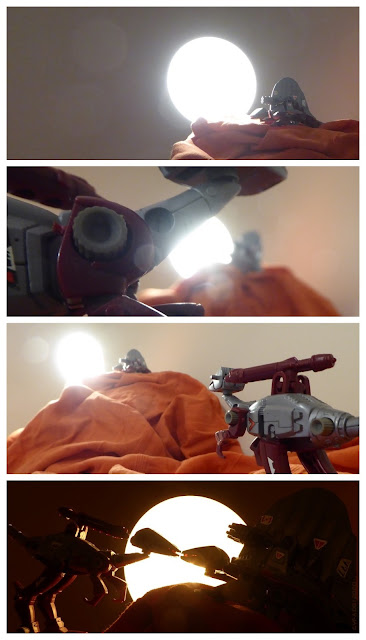 I loved how that last photo came out (it was the first scene/shot I thought of), and I briefly pondered just submitting it on its own (see below).  But then I started thinking about how Hellrunner and Spineback met for that "kiss" and decided to keep the other photos in the sequence. 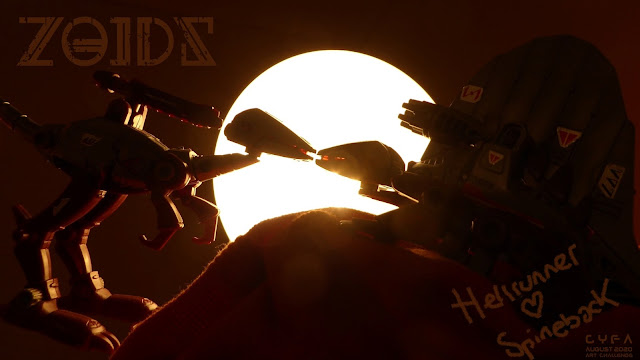 Atop Mount Bookcase, a heavy growth of blanket softens the footfalls of Hellrunner
as it approaches Spineback for a kiss before the Lamp Moon:


Previously on Art Trek (née It's a Faaaake! Not The Art Of Star Trek):

Posted by Inexplicable DeVice at 17:46