It's A Faaaake! Not The Art Of Star Trek - Brighter Future 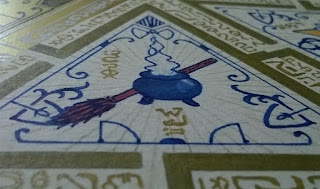 I've been fascinated with Romulan pixmit cards (or pikhmit, according to the Starfleet Museum on Star Trek: The Cruise) ever since they first appeared in Star Trek: Picard. The urge to make a set has been almost over-powering, but life (and laziness) kept finding ways of thwarting me, so I only got as far as cataloguing the cards seen so far.
That these pixmit/pikhmit cards could be a Romulan take on tarot cards is a good enough reason to finally create some for this month's art challenge (as set by February's winner):

[T]he theme [is] "Looking Forward". Whether it's to the future, to better times, to newer bigger and better starship designs, just something in the Trek universe with an eye toward looking forward to a brighter and better future.

(As with many things on the internet, click the photos to embigulate) 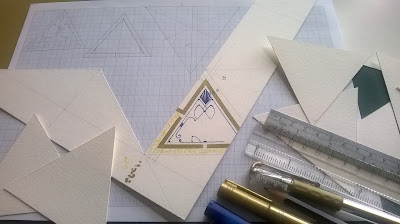 After settling on a size (9cm each side), I cut out ten triangles from a piece of china coloured card (too thin for proper pixmit but I didn't have any thicker mounting board-like card), and had a play around with pen and ink using the leftover card.  I used a gold metallic marker for the border, dark blue fineliner for the curlicues, and a gold fineliner for the outer text border.  The curlicues were far too big on the trial card, but I just wanted to see if I could do them relatively quickly/easily.  And the border text was too yellow so I had to walk into town to buy a different, darker gold pen. 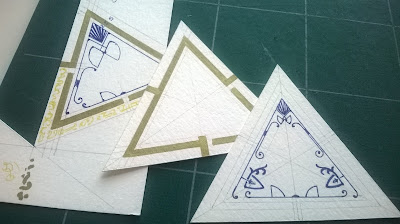 As you can see below, I managed to get a couple of cards prepared for their central image/icon (I added radial lines with a gold pencil crayon).  At this point, I hadn't finalised designs for the "brighter future" icons - and only had a few ideas (a sun, a book of prophecies, a Romulan, Klingon & human standing together, amongst others).  I didn't want anything too complex though, as I wasn't confident with my ability to draw anything even remotely recognisable in such a small space! 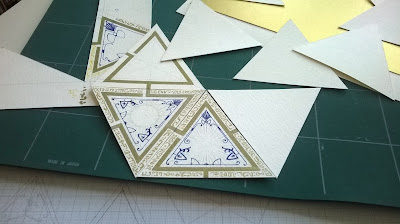 I finally got the ten pikhmit/pixmit cards prepared for their central icons, plus a gold bonus/joker/get-out-of-jail-free card which I call the Open Door (a more positive card than Seb Cheneb, The Destroyer).  The gold card is not seen in ST: Picard and is entirely of my own creation.  Like one or two of the other cards, it has openings on all three sides, but they all open in the same way - meaning, one can only approach and turn left into the card on any side (unless one exits an adjoining card with a right-turn-in opening opposite, like the lowermost card in the photo below, in which case one can travel from that card directly into the Open Door). 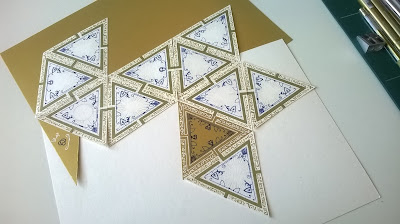 I was just about to ink the blue curlicues of the penultimate card, when I noticed on my reference screenshot that some cards had what looked like a little head in place of the two quarter-circles on the lower sides.  Of the 31 different cards I've counted on screen, 11 of them have the "head", while the rest have the quarter-circles.  To make up for the lack of "heads" in my limited selection, I included one on each side of the gold card to guard the opening between the quarter-circles. 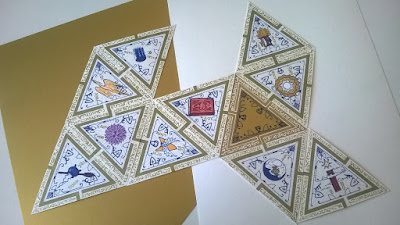 Four of the icons can be found in Star Trek - Whale Probe (blue cylinder, top left), Eisn (pink sun, centreline left), wings superimposed on Starfleet Delta (centreline, next to Eisn), and Bird-of-Prey (Romulan starship in a crystal ball, lower line).  Two are from other shows - the Fiery Phoenix from Battle of the Planets/G-Force/Gatchaman (top left), and The Nice and Accurate Prophecies of Agnes Nutter, Witch from Good Omens (book, centreline).  The remaining four I plucked from my experiences (in witchcraft, amongst other things) - Nature (tree, deer, human/Romulan, top right), Witch Paraphernalia (cauldron & broomstick, centreline left), Light Bloom (although it looks like a cauliflower... centreline right), and Tower (lower right).  I thought I'd better explain what all the icons are because of my questionable ability to draw anything recognisable in such small spaces...

Anyway, on to the reading/game.  No rules or gameplay were established in ST:Picard for pixmit/pikhmit, only the turning of cards and then placing them in some kind of connecting pattern. I'm not going to make up any rules for my version as rules are for those who lack a greater understanding of what they're doing (either that, or imagination).  I will just point out something I alluded to above, that the gold borders create the walls of a maze, and the cards could be laid in such a manner to navigate a path through/around the various icons, with each icon depicting a step of the journey (interpretation of the icons is up to the diviner).
I suspect Hound may have a greater insight into all this than I do... 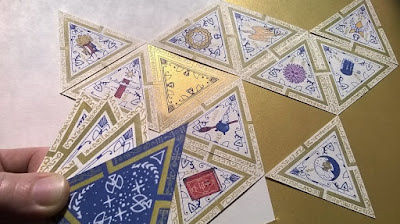 I created an extra card yesterday - the blue one I'm holding in these photos.   I found some blue card in almost the same tone as the curlicue ink, and decided to create a card based on the emblem of the United Federation of Planets (from Star Trek), an organisation that extolls peace, harmony, and exploration towards utopia (although, not always successfully - particularly with regards to the Romulan Star Empire).
Then, thinking about the divination or gameplay, I thought it might be useful to include some game pieces or markers for one's journey through the maze.  To that end, I used some of the belemnite fossils I've collected form the beach recently. 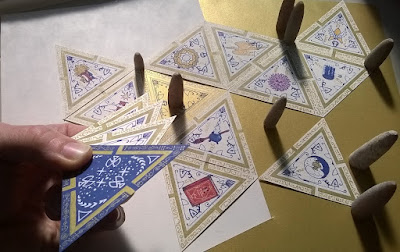 I think I'm going to use the image below for my art challenge entry as it shows everything reasonably clearly.  Although, I'm not totally convinced about using the belemnites.  What do you think? 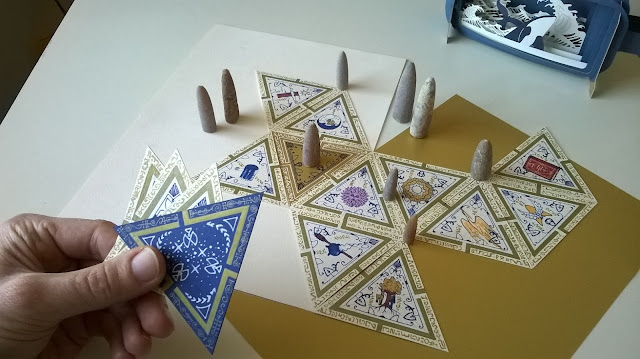 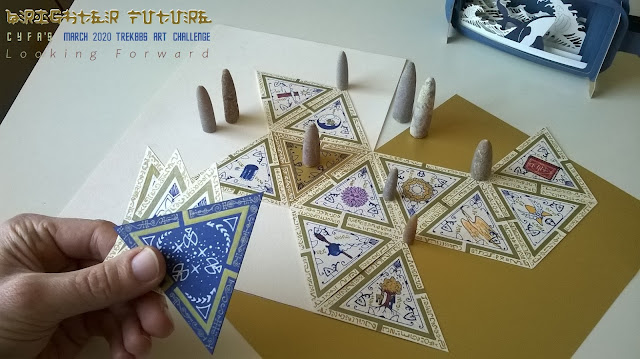 Posted by Inexplicable DeVice at 11:11