I thought Gerbil DeVice* was dead.


Turns out it was just really fast asleep. I'm glad really, as I don't want another ghost-gerbil incident...

We arrive approximately 25 years ago in the family home of The Host, The Sisters DeVice and The Parents. Specifically, in the living room, upon a large, brown, corduroy settee where the aforemention Host and Sisters are sat in front of the telly:

"But it's true!" Inexcuseable protested with more than a hint of whine in her voice (Don't worry, it was non-alcoholic, after all, she was only about eight).
"Then why hasn't anyone but you seen it?" I asked her, scratching my arm absently. Indescribable just sat gormlessly glued to the telly, oblivious to the heated conversation going on next to her.
"Because they lived under the piano in the dining room!" This statement could not really be argued with as the dining room was barely used what with housing the Infernal Piano of Doom and all.
"What do you mean 'they lived'?"
"Well" and the way she said 'well' followed by a deep breath meant that she had a long and somewhat preposterous story coming up. "I accidently dropped one of the gerbils an' it was pregant an' it exscaped into the dining room an' it went under the piano an' it had its babies an' the ones it didn't eat sucked her dry 'cos she didn't have any food to make more milk an' I couldn't catch them an' then they died an' now their little skellingtons are under the piano an' I've seen them. So there."
My mind finished off respelling words adding punctuation marks to Inexcuseable's outburst but before I could reply, Indescribable bashed me in the ribs with her elbow. "Oi!" I yelled.
"Shh! Telly" she muttered, rubbing the top of her leg though her rah-rah skirt and inadvertantly elbowed me again.
I scratched the tickle on my arm again as I tried to remember what I was going to say, then an itch on my thigh distracted me further. Suddenly remembering what it was, I turned to Inexcuseable only to see her looking at me with a smug look slapped across her face. "What?" I demanded.
"Y'know how when you kill a spider or fly or sumfing an' then afterwards the itches you get are their ghosts tormentin' you?" she answered but didn't say any more, clearly wanting an acknowledgement from me.
"Yee-es?"
"Well, I can prove the gerbil exscaped." My mind respelled some more.
"Go on then!"
"Look through the real to see the spider-ghosts" she said.
"But we haven't killed any since finding out about their ghosts" I replied, slightly mystified.
"Just do it!" she demanded.
I sighed and then relented, focusing my sight through what was real and out the other side. And jumped. "Jinkies!" (we watched a lot of Scooby Doo).
Crawling over the three of us were the faded little ghosts of two young gerbils. They scampered across our legs and over our arms, scrabbled up Indescribable's bat-wing jumper and jumped across our shoulders.
Breaking through her TV-induced stupor for a brief moment, still oblivious to what was happening around her, Indescribable announced: "T-Bag and the Revenge of the T-Set is on next", and we all settled down to watch the show, hoping that the irritating Sally Simpkins would get her comeuppance, and forgetting all about the fading ghostly gerbils.

~ cue an even wobblier flashforward effect ~

Actually, after looking back, I think that's the real reason Indescribable palmed Gerbil DeVice off on me: She didn't want to deal with its little ghost! She obviously wasn't that oblivious after all.

Posted by Inexplicable DeVice at 22:04 4 comments:

Labels: Castle DeVice, Familiar, I We Me Us, Relativity, Time Displacement, Witchcraft


While I was preparing and researching the last post on my 'Stats' page, I had a look at the 'Referring URLs' section. And lo, at number six, with 131 referred pageviews, was this site:


Star Trek Online. Specifically one of their forum pages.

To save you the bother of link-clicking, it appears my Star Trek uniform designs have been recognised! This is what the poster posted on 5th May 2011:

Okay, so browsing the forums this evening, I came across a reference to the U.S.S. Relativity uniform.. I'd forgotten what it looked like so I did a Google search, and came across these... 1, 2, 3, 4

Now, I don't know this person from Adam... but I really.. really like the look of the uniforms displayed.

So.. as a suggestion... would you guys at Cryptic maybe contact this guy? See if he'd be interested in working with you, or selling his ideas for uniforms in game?

There is much hullabaloo regarding the *lack* of 2409 Uniforms, and although I am aware that there is an announcement regarding the Jupiter uniform series, I feel that more options would be better.


And this is the post that garnered the 131 pageviews:

Again, to save your clicking-finger from wearing down to a nubbin, here are the uniform designs - in colour! - complete with 'hideous back stripe' (you'll have to read the forum for the 'hideous' reference. Don't worry, it's only two pages): 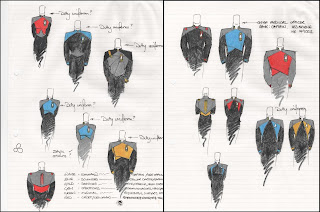 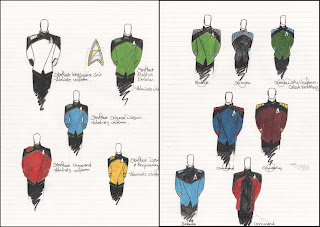 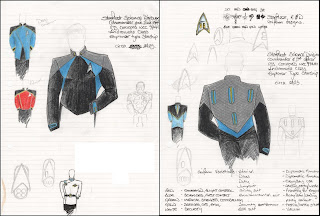 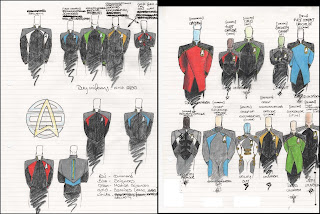 Needless to say, I haven't been contacted by anyone from Cryptic wanting to buy my designs, or work with me in adapting them for the game.


* Jolan tru is a greeting used by the Romulans.

Posted by Inexplicable DeVice at 22:12 12 comments:

Top 10 Searches, or: Battle of the Bulges!


In response to MJ's Top 10 Searches post, here are the top 10 not-quite-as-depraved search keywords of all time (in reverse order) that led people (and I use the term in the loosest possible term) to Inexplicable DeVice (the blog, not myselves):


10. Manticore
Manticore infested biscuit tins must be more common than I thought?

9. Olympic bulges
This must have something to do with Dinah or that chapeau de tin-foil created by Eros. 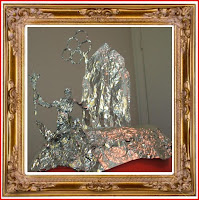 8. Connor Trinneer bulge
This could be from any of a number of Trinneer-based posts - more down below (fnar fnar)!
7. Chris Pine naked
See the number one visited post at Inexplicable DeVice in the section below

6. Ryan Kwanten bulge
See the number one visited post at Inexplicable DeVice in the section below

5. Alien Queen
They must have been after MJ...


4. Chris Pine bulge
See the number one visited post at Inexplicable DeVice in the section below

3. Bulges
See the number one visited post at Inexplicable DeVice in the section below

1. Connor Trinneer
And here he is in all his buff and bulging glory!


Gah! I've read and typed the word 'bulge' so many times now that it has lost all meaning and looks ridiculous!

And now for the Top 3 visited posts of all time here at Inexplicable DeVice...

3. An unexpected 'guest'
I have absolutely no idea why this post should have garnered 2,248 visits? 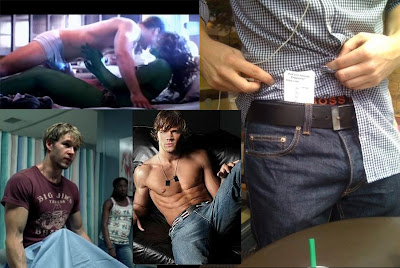 
P.S. I would have posted this on the same day that MJ did hers, but we lost the interwebs here at Castlette DeVice.

Posted by Inexplicable DeVice at 21:30 10 comments: 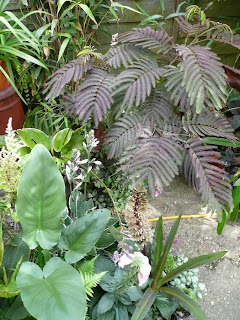 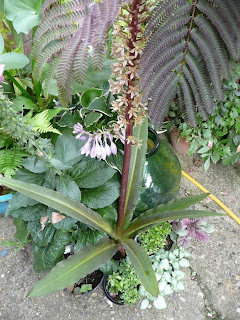 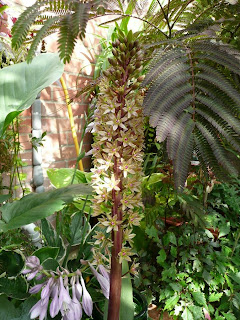 I didn't buy a Rheum Palmatum, which was good. Although, I did find an Angelica which I now covet.  I think I'll be going back again next weekend...

Posted by Inexplicable DeVice at 15:31 4 comments:

Labels: Castle DeVice, Triffids and such


Inexcuseable wants to go to the garden centre once she gets home from work, and only because Lily's Tearoom does absolutely outstanding food (she always has a bacon & brie baguette).  I have been instructed to go with her - which I don't mind - but it means I will purchase a plant (or twelve) despite giving myselves explicit instructions not to.

Yikes! She's home. Here's my little bit of garden as it is now. In the interests of saving money, I'm hoping that it'll stay this way, but I'm not holding my breath... 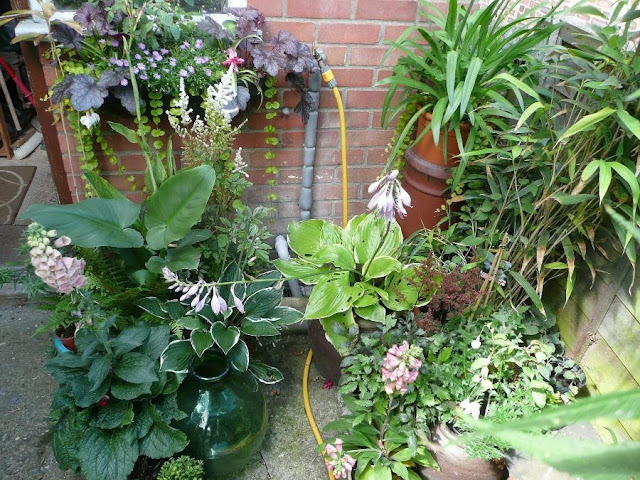 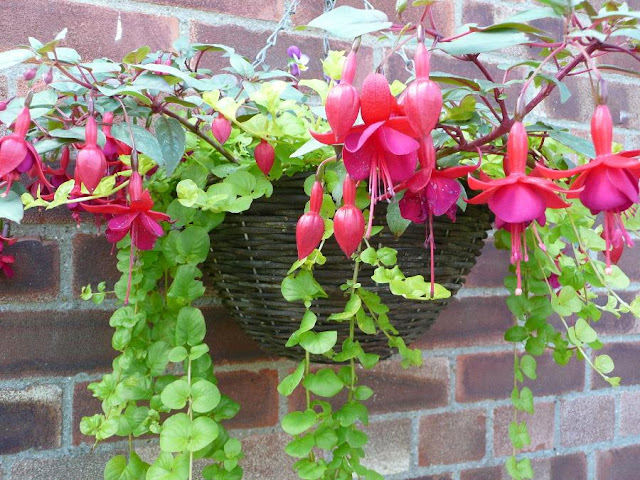 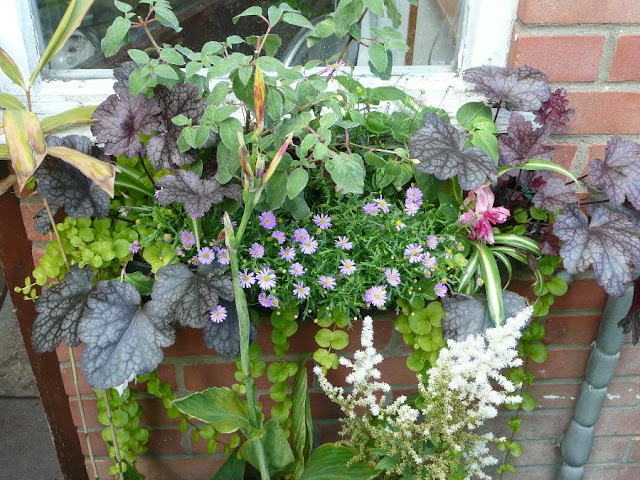 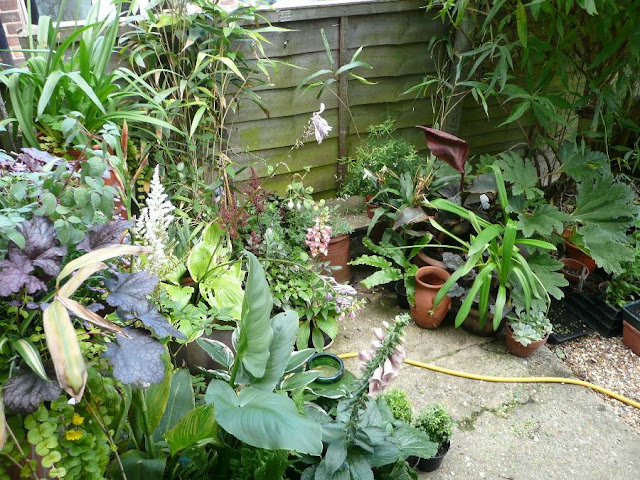 EDIT, 17:02 - Well, we're back. And you'll be surprised to hear that I didn't buy any plants. Not even the gorgeous pineapple lily, or a magnificent rheum palmatum, or even the delicate and feathery albizia.

I did, however, end up paying for the three of us to go to the zoo.

Posted by Inexplicable DeVice at 12:31 8 comments:

Labels: Castle DeVice, I We Me Us, Relativity, Triffids and such
Newer Posts Older Posts Home
Subscribe to: Posts (Atom)