It's A Faaaake! Not The Art Of Star Trek - Anomalous T-Shirt


Yes, the promised threatened foreshadowed post concerning an anomalous T-shirt is Star Trek-related!  Sorry, not sorry.
The anomalous T-shirt came about as a result of October's Art Challenge, as set by the winner of September's challenge:


Last month many of us proved that we are well versed in the world of starship design. This month I'd like to focus on another staple of the Star Trek universe: the infamous space anomaly.

Subspace, space-time, temporal, spatial, gaseous, gravimetric, chroniton, quantum, polaron, thoron or anti-time — it's completely up to you. Make it abstract or concrete, a swirling blur of color or a blinding ray of light, drifting through the endless void of space or floating on the surface of some alien world. You can show it on its own or facing a starship.
I'm looking forward to what you can come up with! 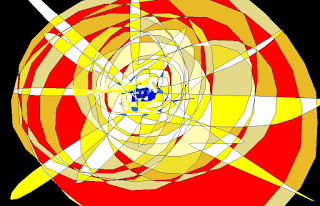 One of the first thoughts to pop into my head was the Horrendous Space Kablooie I came up with years ago (inspired by Calvin & Hobbes).  I wondered if I could update it, or amend it in some way for the challenge, but gave up after only a few attempts in FotoSketcher. 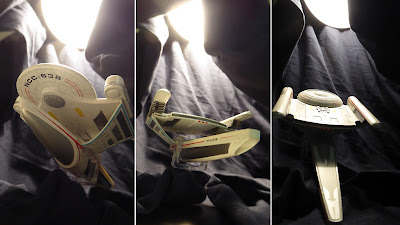 In fact, I almost gave up entirely as the weeks flew by then, suddenly, it was the end of October.  In a flurry of desperation, I threw a navy-blue long-sleeved T-shirt over my bedside lamp and placed my little model of the Federation Starship USS Grissom underneath and snapped a few photos. 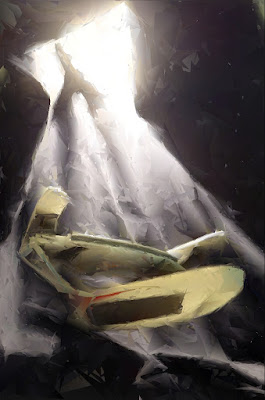 Having chosen a suitable shot, I plugged it into FotoSketcher and hastily mucked around with the drawing styles.  I quickly settled on the stylised effect called "Emergence" - which turns the picture into a load of triangles.
The first effort (on the right) was decidedly lacklustre as the triangles were too small which gave too much definition to the image, making it look like exactly what it was: a little model in front of a brightly lit bit of cloth.  Pah!
I altered the settings to make the triangles bigger, and was quite pleased with the result: It looked like the little Grissom was enveloped in a space anomaly made up of thousands of shards of glass. Then I erased/nullified the triangle effect at the rear of the starship to make it appear as if it were heading into the anomaly and the aft hull was still sticking out.  Finally, I added some text and slapped it up in the Art Challenge thread just before the deadline.
The finished article is below: 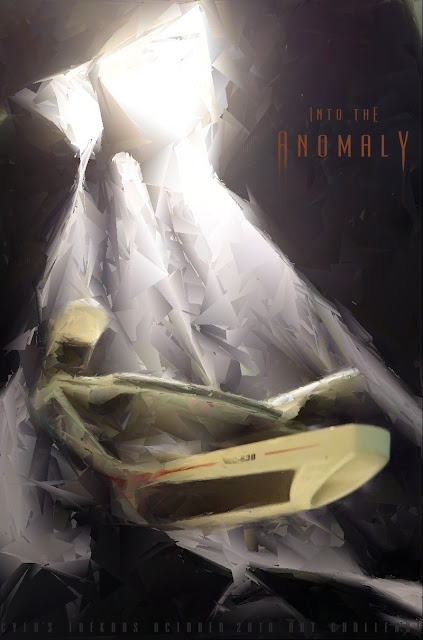 My challenge entry came second.  The winner was an enormous Cookie Monster (his wide open mouth was the anomaly) about to devour the USS Enterprise!  How could I compete with that?

Posted by Inexplicable DeVice at 19:48