It's A Faaaake! Not The Art Of Star Trek - Caught Red Handed


It's been two weeks since my last post, so you'd think I'd have plenty to share, wouldn't you?  Well, no, I've got bog all.  Except for a load of half-arsed Star Trek-related art work from January's art challenge.
Oh, and the new Captain Christopher Pike from Star Trek: Discovery.  He's such a fox!  Just look at him there on the right.  Anson Mount Pike is easily the equal of the original Jeffrey Hunter Pike from Star Trek's pilot episode.  Although, I don't think he ever was a pool boy, though?

Anyway, back to some hastily slapped together artwork, and the challenge that inspired it:


Well, a New Year is upon us and maybe some of us (like a certain Discovery character) are planning on spreading our wings and trying something different this year by joining a new organisation or club.
Star Trek has its fair share of secret or clandestine organisations from the Tal Shiar to the Obsidian Order or Section 31. But perhaps there's other, more benign, exclusive clubs in the Star Trek universe: do the Vulcan's have a Magic Circle? Is there a club for Starfleet Chief Engineers, where they can meet up and bemoan the state of their engines? A Klingon 'Fight Club'?
The challenge this month is to depict a facet of your chosen secret society within the Star Trek universe, be it a logo, recruitment poster, a dedicated starship, a meeting of members, a secret greeting or ceremony, etc.

Rather than leaving it all until the last minute, like usual, I found a few minutes on the afternoon of the 17th January to make a start. After reminiscing with some of you lot about TV programmes we used to watch as kids, I wondered if the Red Hand Gang might have inspired children in the 23rd or 24th centuries. So, out came the red paint: 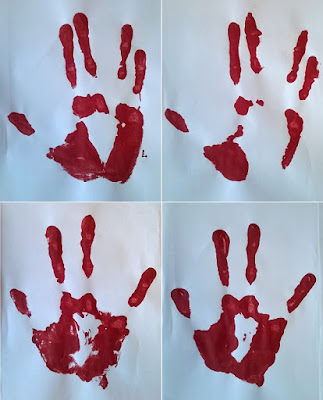 The top two hand prints are obviously (hopefully) Vulcan, and the bottom two are my take on Terellian (of the four-armed variety).

Below is a quick mock-up but, like so many of my previous art challenge entries, I thought it may end up being my submission due to my limited grasp on time. 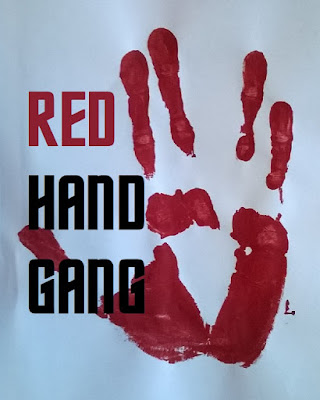 And here's a logo from the Pre-Cog Corps - a little known department within the Terellian Ministry of Intelligence (a conceit purely my own - it has never appeared in Star Trek): 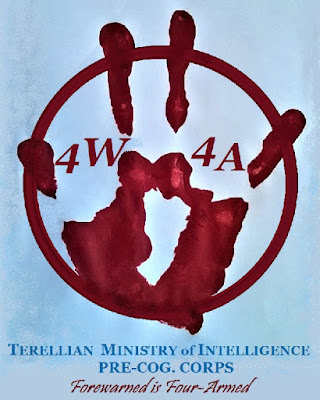 I used a linear half-toning filter from FotoSketcher in an attempt to make it look like an embroidered patch, but the result (below) isn't entirely convincing.  It needed more work than I could be bothered to do! 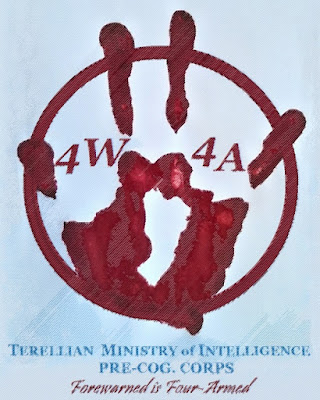 Here's another take on the Star Trek version of the Red Hand Gang. The staff of Starbase 11 keep finding these hand prints popping up in the Jefferies tubes... 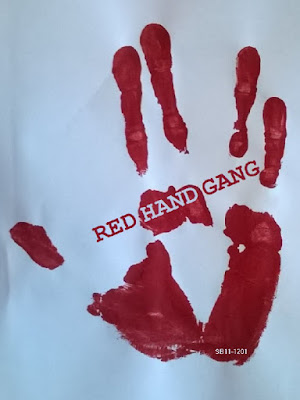 I wasn't really loving the hand prints, so I fell back on this idea I had for the secret-ish (more like almost unknown) Trill group called the Watchers who were always on the look-out for the return of the Bluegill parasites.  Only a few sketches at the mo - a combination of the Trill Symbiosis Commission logo and a watchful eye:

I finally stopped dithering and had a go at the Watchers logo on the last day of the month. It's a bit primitive as all my art stuff is packed away in a box in Indescribable's garage until I move into the DeVice Mansion (in the next couple of weeks or so, hopefully). I had to make do with 18 month old Count Podgekinson's "My First Crayolas" and a gel pen (the hand prints weren't made using his finger paint as I managed to find a tube of red acrylic paint in a box under my bed).

I went with the Trill logo as the 'Red Hand Gang' stuff seemed a little too sinister - it probably would have looked better if it'd been a child's handprint (but I wasn't even going to try to attempt to get Count Podgekinson, Vom* Smallhausen, or the Little Witch to try and make a Vulcan "salute" and get them to stay still for long enough to dip it in red paint etc.  Imagine the carnage!


* Changed from "von" after a spectacular display of projectile vomiting.

Posted by Inexplicable DeVice at 15:29