will be held again here later in the year
(unless any of you fancy having a go at hosting, that is)

You know, this might be the earliest announcement for the Infomaniac Garden Photos Event ever published?  If I could be arsed I'd do some research to check, but I can't, so you'll just have to go along with it.  Unless you'd like to check for yourselves, of course?

Anyway, as I've treated myself to a day off work and have got shit all else to blog about, I have taken The Very Mistress's advice (command? order?) and come up with this primer for this year's Event, complete with photos of the pre-Spring blooms here at Hexenhäusli Device! 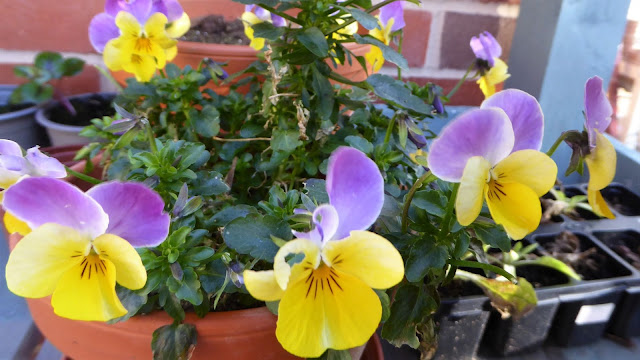 Oh, before we go any further, here's a musical accompaniment to your downward scrolling: The Procession of Celestial Beings, composed by Joe Hisaishi and performed by the New Japan Philharmonic World Dream Orchestra (from The Tale of Princess Kaguya - which I watched the other day).

In an effort to continue the blogging impetus that I started last week, may I present a slight deviation from that of Ms Scarlet's original ketchup-based post. This post has a high Star Trek content, so you may be pleased to find that it is mercifully brief...

Sketches:  For a while now I've had an idea to illustrate a scene from the backstory I worked up for the Star Trek map that I created back in 2019.  As I don't have an art project on the go right now, I started sketching... 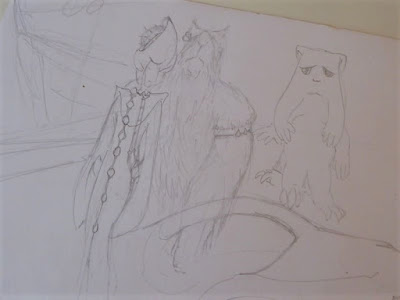 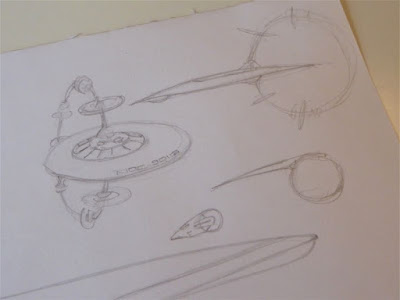 And here are some quick passes at the yacht
inspired by batjorge's Quantum Projection.

Snippets: "Every morning he'd arrive at work, ascend the steps to his cubicle and strip down to his trunks."

Two years on from the last playing card reveal in a Star Trek production, comes glimpses of another deck - in this case, from a game of Leonian poker in Star Trek: Discovery (which I'm not watching, by the way - I didn't much care for the last season, and this one's on yet another streaming service that I'm just not going to sign up for.  Well, until Star Trek: Strange New Worlds with the yummy Anson Mount/Captain Christopher Pike starts later this year, that is).

It was the Arcadian Queen that got my attention - as seen on Star Trek fan, Jörg Hillebrand's twitter account, here.  Arcadians are very seldom seen aliens who first appeared in Star Trek IV: The Voyage Home (the one with the whales) - which is where the third screenshot comes from.  I can feel the need to make some of these cards, just as I did with the Romulan pikhmit/pixmit cards here.

[Screenshots from Cygnus-X1 and Trekcore]

"Tilted" by Christine and the Queens.

I discovered this thanks to The Great British Sewing Bee.  A small part - "I'm doing my face with magic marker" - was playing during the modelling of one of Raph's creations in series 7.

A blast-from-the-past that I'm listening to as I type this is "I Wish I Cared" by a-ha.

And that's it.  I aim to be back by this time next week in some form or other.  Have a good week!

Posted by Inexplicable DeVice at 17:24 20 comments:

I've realised that I'm in danger of never blogging ever again unless I do something NOW!  So, taking a leaf out of Ms Scarlet's book - almost literally, and with her permission (kind of) - here's my quick-and-dirty, copy-and-paste Sunday Ketchup.

"Sunday Ketchup. It will be a random account of my week and will include quotes from my journal [my very secret journal that I show no-one ever!]; photographs; collages; calligraphy; and, of course, the obligatory piece of Sunday music. How thrilled you must be to read of my good intentions. Again. Let us proceed…"

My week - nay, my weeks - since my last post have been spent continuing the dither that engulfed me at the start of the year.  It's got to the point where I've become a passive observer rather than an active participant, which means I've barely done anything of note at all.

I haven't produced any calligraphy of course, but I did spend 10-15 minutes making a £999,960 Bank of Bungle bank note for my sister Indescribable's birthday earlier in the week.  She wanted a million pounds so I topped up the £40 John Lewis voucher I got for her with this: Spot the mistake (which I corrected after I took this photo)...

In my very secret journal I wrote: A rescue - from [a spiral in(g) time] - a survivor, Galuth Nym, an old woman who should be young.

From my emails I wrote: Thanks very much for sorting Car out. Again. I’m sure it won’t be the last time – unless I get a new car sooner rather than later...

Photograph of the week: 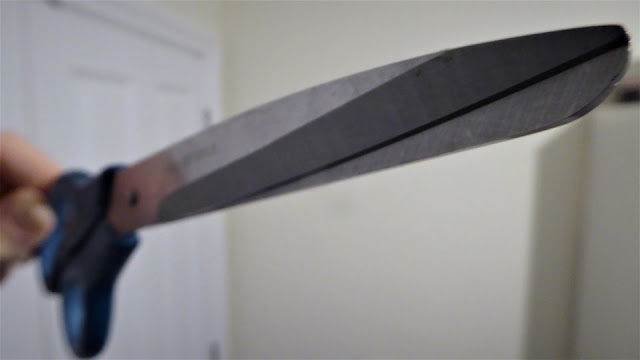 Taken for an art project that never took off...


A tune that I discovered yesterday and have listened to rather a lot: "Impossible" by Röyksopp & Alison Goldfrapp

Right.  I'd best be off as there's loads to do before I can lounge about in the bath for a couple of hours this evening.  Plus, I need to do the catch up with all of you that I didn't do last time.

P.S. I love all your comments in the last post.  Carry on!

Posted by Inexplicable DeVice at 16:41 26 comments: