As (some of) you seemed to like last month's Star Trek cut-outs, I have thoughtfully provided some more for this month's Art Trek.
That'll teach you!
Shush, you!  Now, where was I?  Oh, yes:  July's Trek Art Challenge:

The theme for this month's art challenge is my favourite colour combination: Blue and gold. Lifeforms or livery, technology or fashion, whatever your chosen subjects from the Star Trek Universe, blue and gold must be the featured or prominent colours. And I want to see that gold glittering and gleaming!

Despite coming up with this month's Art Challenge theme, I didn't have a clue what I was going to do until rather late in the game.  I had an idea to do a map vaguely similar to the one I did back in 2019 - and even got as far as mocking up a little gold Oberth - but I couldn't (and still can't) envisage the finished article, so I moved onto something else.  Here's how far I got with the map: 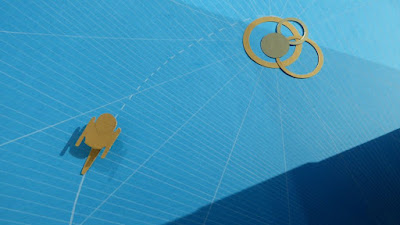 I might finish it off at some point, but I probably won't.  Anyway, you came for cut-outs, so here they are - as fashioned over the weekend of 24th/25th July - a pair of Andorians with a selection of gold ribbon that I've acquired over the years: 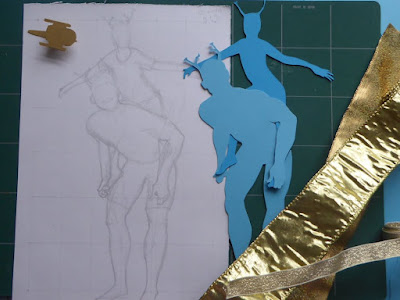 Despite the forecast promising overcast skies the next day (just like the weekend), every working hour was blue skies and sunshine out of my window.  When at last it was time to shut down the blasted laptop, a haze of cloud appeared.  Because of course it did.  Anyway, I managed to get down to the beach and take a few photos of this Andorian thavan and [his] shei (just in case there were no more nice days for the rest of the month) - this one is one of the better ones: 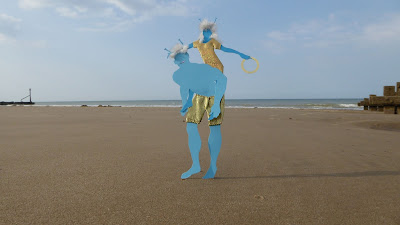 Oh, I made their hair out of little, downy feathers I collected on a walk, and the frisbee is one of the rings from the aborted map idea. 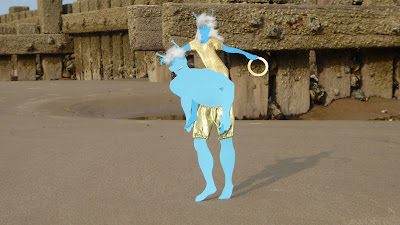 Here they are again at just gone 7:00 in the morning.  Jadzia and Worf made it to the beach this time, too (along with "Big Bird") - well, I had to make up for last month's lack of beach action. 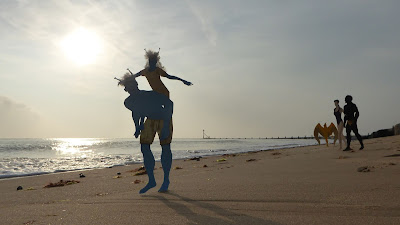 I must admit, I'm really pleased with how it came out.   For a very rushed photoshoot (down on the beach before work on Friday 27th) with only about a metre or so of sand between the waves and the sea wall (the photo makes it look like there's quite a bit of beach, but there's not - the Andorians "enjoyed" a surprise paddle!), I think it looks pretty good.
However, it's no good for the challenge as the blue and gold are too subdued because of the bright, morning sun behind them.  I went down to the beach Saturday evening with the hopes of getting a shot with the sun in front, but it was far too cloudy. And, even more annoyingly, far too people!

As the weather hasn't cooperated with evening jaunts down to the beach over the past couple of days, I had to resort to tinkering with the latest photograph in order to brighten things up a bit.  But it hasn't really worked as I can't get their gold beach-wear to gleam.  Instead, I've had to rely on the sunlight glittering on the sea for the gold part of the theme: 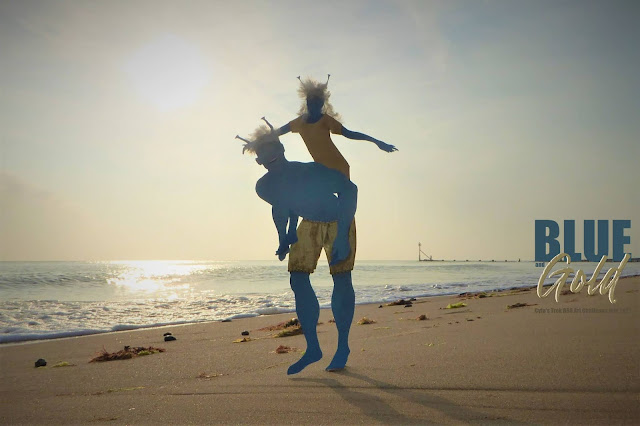 That's it for another month.  I wonder what August will bring?