It's A Faaaake! Not The Art Of Star Trek - Boldly Go in Infinite Diversity

It's that time again!

Fancy depicting Culber and Stamets at the Kasseelian Opera? Or showing the Enterprise warp streaks with a distinctly rainbow tinge? Then this is the thread for you!

The first thing I did was to check if my new(ish) markers (Winsor & Newton ProMarkers, don't you know!) included the colours of a rainbow.  They did.  Just about... (Ruby, Bright Orange, Canary, Forest Green, Sky Blue, Amethyst, and Rose Pink).
After I'd tried out the colours with the broad nibs, I sketched a little Star Trek alien into each stroke, whose skin tone matched that colour (or as near as my colourblind eyes could manage).


A Rainbow of Races 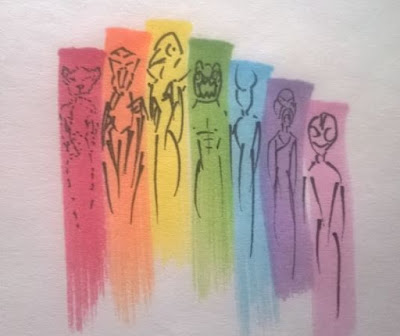 This is much larger than actual size which shows just how hopeless the likenesses are, so, to aid identification, from left to right we have: a Caitian (not a teddy bear - I was reaching a bit here, as Caitians are more of an orangey-brown), Tholian (not Munch's The Scream.  In hindsight, I should have swapped with the Caitian, as Tholians are more red), Aurelian (not Big Bird), Gorn, Andorian, Betelgeusian, and a poor boggle-eyed Saurian.

As it's been 35 years since the release of ST III: The Search For Spock, I decided to try an IDIC/LGBTQ/TSFS mash-up next: 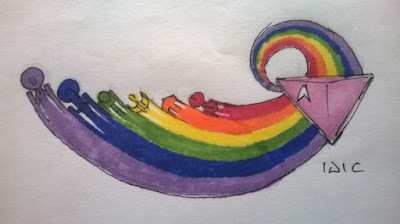 The little ships are all from STIII, from left to right: amethyst Enterprise, indigo Excelsior, green Grissom, yellow Bird-of-Prey, orange Merchantman, and the red ship is the Ralph McQuarrie Enterprise seen in Spacedock when the actual Enterprise comes home.  I was going to do an orbital shuttle instead of the red Enterprise, but it just looked like a blob at this scale (IDIC spiral is only 9cm across).
Other ideas I was toying with included a Vulcan couple (both male) doing the finger greeting/foreplay thingy, and a Drag Klingon - teaser below: 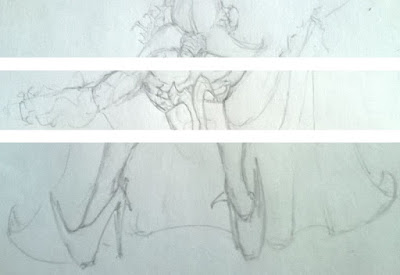 I settled on the Drag Klingon.  However, I messed it up.  Here he his looking more like a camp panto wizard than a fierce drag queen:

It's his hips and left leg, I think.  It's not clear which leg is carrying his weight, which makes his pose look a bit off.  I decided to scrap it and do a more "fighting stance" pose, losing the staff and finger blades, and probably the cloak, too.
FYI, the big hair is based on the emblem of the Klingon Empire, the bodice/corset thingy is borrowed from Valkris' wardrobe (STIII:TSFS), and the silver head-dress was inspired by her decorative choker.

This is my second attempt: 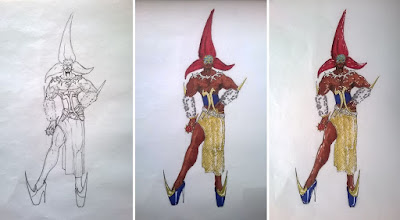 Although I didn't go with a fighting stance, I did get rid of the staff etc, and I think the pose now looks more "pop star" than "camp wizard" - a bit more appropriate.  Boldly Go in Infinite Diversity!

I posted these work-in-progress pictures in the Trek BBS art forum yesterday and received some constructive criticism: "Cool. The only issue I see is that if you hadn't said it was a Klingon drag queen, I wouldn't have recognized it as a Klingon..."
It's this sort of critique that makes me wish I hadn't left all this to the last moment again, as I didn't have the time (or inclination) to re-do it.  Especially as the deadline was midnight!
The critic did have a point though.  As this is such a small sketch, one has to look very closely to see the head ridges (and the fact that they're covered in "make-up" probably doesn't help?).  At that point I thought that I could have put some ridges on his feet like Worf has, which may have helped to identify his species but, again, I couldn't be bothered.  Oh well - I'll just have to hope that the Klingon costume (however exaggerated) is enough.
(I also don't like the white "glossy sheen" highlights now!) 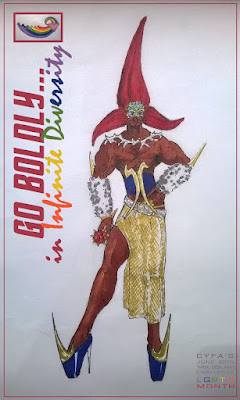 Although, I found myself feeling sorry for the little boggle-eyed Saurian and his friends from my initial idea, as they didn't make the final cut.  So, as this month's theme is all about inclusion, I found a space for them: 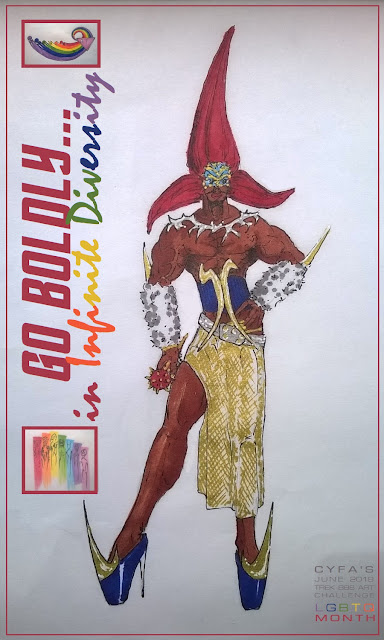 Posted by Inexplicable DeVice at 07:31