Art Trek: "These are a few of my favourite things!"

Well, that's August done and dusted.  And you know what that means: Time for some of my Star Trek fan art!

Yes, one of the things that kept me busy last month was working on a rather ambitious piece for August's milestone 200th Star Trek art challenge.  Having helped to come up with the idea, I knew I had to pull my socks up and not turn in some half-arsed attempt that I hadn't even finished properly (like many of my other efforts).

Oh, and half-naked Rutherford on the right there is not just gratuitous eye-candy - he's relevant to the proceedings what with being a particular favourite (not unlike Connor Trinneer's "Trip" Tucker, who also features later on).

Your task is to create something out of Trek that means something to you. It can be your favorite ship, character or idea. Or just some Trek thing that you like/wanted to draw, model, photograph, cosplay or sing etc. Do you own a Star Trek costume? Well, then snap a photo of it and submit it to the contest! You're into Trek gaming? Then make a screenshot of something you created in the game! Almost anything goes this time.  Have fun, and good luck!

I started by making a list of Star Trek characters, starships, locations and objects that I liked but, as you may have guessed if you know me at all, I couldn't whittle them down to a single (or even a few) thing(s).  So, there was only one thing for it: I was going to have to include all of them!

I was thinking of a "Where's Waldo?" type affair after I came up with the idea of just drawing everything on my list - an image packed full of things to scour through.  And then I remembered Star Trek had some versions of sorts in the "50 Artists 50 Years" art book (which I then pulled off my shelf and flicked through): Amir Abou-Roumié's "Homestead" was the closest to what I envisaged.

It was going to have to be bigger than my normal efforts as I needed to fit quite a lot in, but not so big that I'd have to draw recognisable faces (which I'm absolutely rubbish at).  The initial sketch above is A4, but I resigned myself to doing the proper one at least A3.

Unsurprisingly, it didn't really work out as I'd hoped. I'm just not skilled (or patient) enough to create what I can see in my head - the cartoon (Lower Decks-ish) style that I envisaged just turned into crappy drawings because I couldn't help but go into too much detail to make things recognisable.  Plus, realistically A3 was still too small - I needed to go bigger, but it was already the middle of the month and time wasn't on my side.  It was quite overwhelming.  So, there was nothing left to do but have strop and sulk for a bit.  The image above is where I'd left it.

Fortunately, after some encouragement from a few Trek BBS users, my mini-strop soon dissipated, and I went back to work on "These Are A Few Of My Favourite Things" (as I started calling it).  I was much happier with it once a bit more of it was done - and the addition of a few bold outlines really tidied things up as you can see above.

And by Monday lunchtime it was finished!  Despite it not being exactly how I imagined, I am satisfied with it.  This certainly is one of the most ambitious pieces I've done for these art challenges and, despite finding it intimidating at times, I've had fun working out what/who goes where (and what/who to include) - Gillian's spaghetti arm notwithstanding.  I kind of wish now that I had gone with a bigger size to fit more in - But then I wouldn't have finished it until the end of next month!

Not everything you see here has appeared on screen, as many of my favourite Star Trek things exist only as concept art, merchandise, or in books (both behind the scenes and fiction).  Also, I discovered that my favourites are rarely those well known, iconic characters and ships, but I hope you can recognise at least one or two things from my little selection:

For those of you who are not Star Trek aficionados, I have helpfully provided a key to this "who's who" of my Star Trek world: 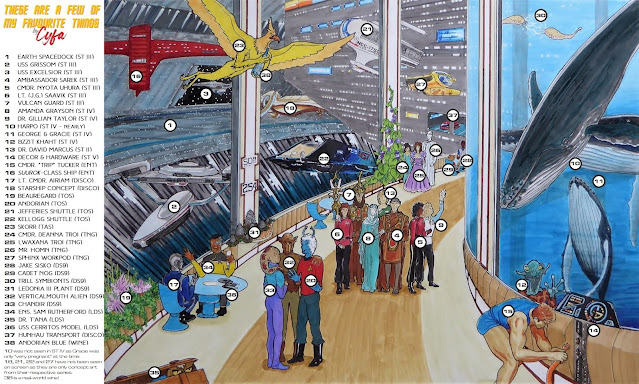 The setting (1) is the interior of Earth Spacedock as first seen in Star Trek III: The Search For Spock (my very favourite Star Trek film), although the beige & tan decor (14) is from the Enterprise-A in the much maligned ST V: The Final Frontier.  The black shuttle (22) is the Kellogg Shuttle (there're some great 'photos' at the Sci-Fi Air Show), the little red one (37) was going to be the Hunhau yellow transport from DIS: "Scavengers", but I forgot what I was doing and coloured it in red - d'oh!  And I have no clue what the alien ship is (18), but I've loved it ever since I first saw it on the pre-publication cover of the Discovery: Designing Starships book (I suspect it's a Vulcan ship concept, but I'm not sure - I don't have the book, so I don't know if it features inside).

If you'd like to know about any of the others, either ask me in the comments, or if you'd rather not show your interest publicly, you can look it up at Memory Alpha in private ;)

Labels: Canvas, Crush, I We Me Us, Mood Swings, Star Trek, Triffids and such, Wildlife