High Tide at the End-of-the-Line 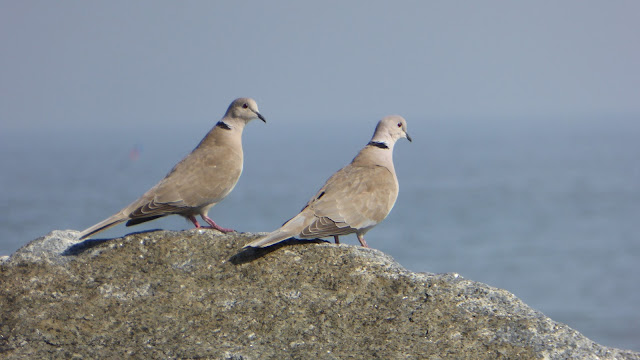 So, these are the rubbish-less, graffiti-less, "massive knob-fest"-less (thank you, Jon x) photos that didn't make it into the previous post. 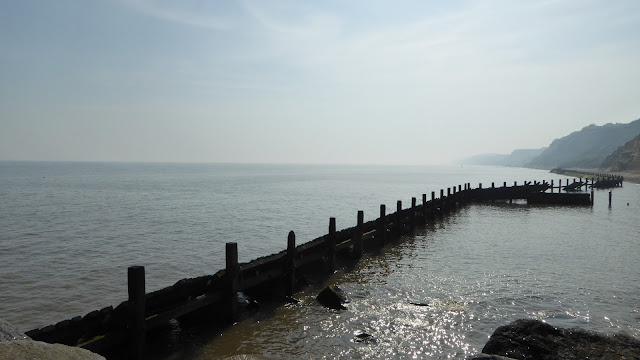 Rubbish. With knobs on!


"That isn't a real beach" declared Hound, of my previous post.  "I can tell because there isn't a single condom, needle, nappy, dead animal or chav in sight.  It's a sort of John Lewis fantasy of a beach."
Rubbish, I say.  With knobs on!  Of course this is a real beach.  Why, just look what I've found for you this morning, Hound.  Rubbish with knobs on.  Oh, and some graffiti at the end.
But first...

I kept my trousers on...

... as per Ms Scarlet's advice, but I did roll up the bottoms!

Well, wouldn't you when faced with a beach like this?


I was looking through my draft posts (22 of them!) to see if I had something almost finished that I could "touch up" and post, so to speak, when I came across (not literally) this one from almost a year ago:

We have a new cleaner at work.  He is young and attractive.

26.04.2018 - After the most languorous yet insouciant display of vacuuming I have ever seen, followed by a nod 'hello', the new cleaner slowly and deliberately coiled up his vacuum cleaner cable while facing half-away from me.  The level of arrogant nonchalance with which he managed to instill in this simple action was quite remarkable. And hypnotic.  His muscles are quite impressive.


27.04.2018 - The muscular young cleaning youth did it again.  I think he may be on to me, though, as this time he deliberately faced me as I was sitting at my desk.  Having completed another seemingly languid and indolent pass of the horrid carpet tiles, he almost casually coiled that cable again, unnecessarily flexing his biceps and bouncing his pecs in my direction.  I didn't know where to look!  Well, I did, clearly...
To make things worse, he actually smiled at me a couple of times.  Not while doing his "routine", but in passing as he moved down the office.

Labels: Crush, I We Me Us, Manual Labour, Mood Swings, Time Displacement

Wind Score and Wishing for Blue


It is cold and overcast here on the North Norfolk coast today, so I'm not going out.  Instead, I'm going to sit at my desk and draw pictures of Starfleet Redshirts falling over, in compromising positions, with wardrobe malfunctions, and being generally clumsy and hapless for this month's art challenge.
While the Host does that, here are some photos from March which include the kind of weather I wish was going on outside now. 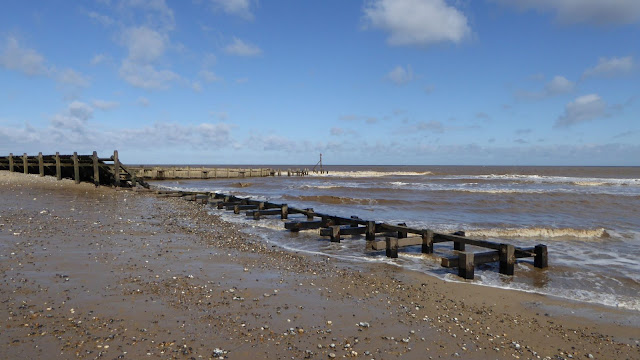 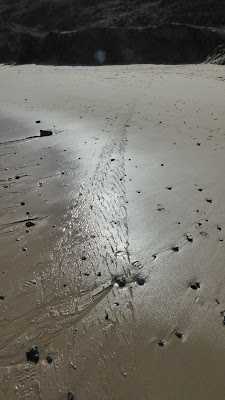 It was very windy on the 17th.  So much so that Inexcuseable informed me later that Number 34's griffin laid the same egg three times!
Nevertheless, it didn't stop me from drifting down to the beach and beyond the End-of-the Line.  Once there, I started to notice some strange marks in the sand.  They looked like tracks from some peculiar vehicle or object that had made its way (or been dragged) across the beach.  However, upon further investigation, they could not have been from any Earthly vehicle/object as, despite their regularity, the "tracks" widened and narrowed as they criss-crossed the sand, leading to and from various inaccessible places.  Also, despite the various footprints on the beach, none of them accompanied these score marks, so they can't have been made by people/animals dragging something.

Labels: Beach, End-of-the-Line, Groynes, I We Me Us, Mythtakes and Leg Ends, North Norfolk, Star Trek, The Science Bit, Triffids and such


Now that I've managed to get one hastily slapped together post published (yesterday's groyne monitoring shenanigans), it's time for another.  Yes, more Star Trek related nincompoopery with my entry for March's Trek BBS Art Challenge.

But first, a quick aside:

Thank you, Ms Scarlet, for my Universe on a Chair!
I shall endeavour to rule it wisely, and not get carried away with
delusions of grandeur or a full blown attack of megalomania.

I have already been doing some tinkering with the Universe,
as you can see below. But only the bit that can be seen from
the spare bedroom of the DeVice Mansion.


And now, the feature presentation:

Here is the Star Trek art challenge as set by February's winner:

Someone is monitoring my groyne!


Right.  Now that Bryce's Bum is out in the open, I thought it was about time to get back to that laziest form of blog posts: photos from a walk on the beach.
These photos are all from Thursday's foray out into the fresh air.  And talking of lazy, I actually got Broom out and flew down there because I couldn't be bothered to walk!
As always, click the pics to embigulate.


Originally, this bottom-related post was just going to be an aside in another post, as it only featured one pert posterior, that of the rather yummy Lieutenant Bryce (portrayed by the equally yummy Ronnie Rowe Jr.), communications officer (just like Lt. Uhura) aboard the USS Discovery.


But then, a recent episode displayed gratuitous shots - bordering on the obscene! - of the new Spock's spacesuit clad buttocks.  I, along with many others, had to reach for the smelling salts.  And then lost several hours wearing the pause and rewind buttons out...