All The Queen's Horses...

New single, All The Queen's Horses


And now, how about some of their classics:

Out on a School Night


The other day, Dinahmow had sent me a photograph of the beach between Overstrand and Cromer, taken in the evening of 11th May, with a solitary someone on the sands.  She asked if it was me, but it was not, I replied, as I'm more of a morning beach walker than an evening one.*
It did, however, prompt me to drag myselves down there on Thursday evening, from whence the following photos came from. 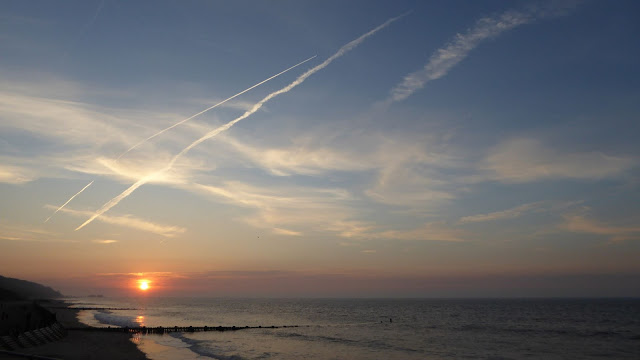 I did not, however, have the beach to myself.  Rather inconsiderately, a large group of youths (with a handful of supervising adults) were congregated at the foot of the cliffs getting up to who knows what, and making a din about it.  I tried not to get any of them in shot, but if you squint at the bottom left of the photo below, one can just about make out the fuzzy, indistinct silhouette of a youth clambering over the curved revetment.  Ruining the photograph.  Ruining everything!!! 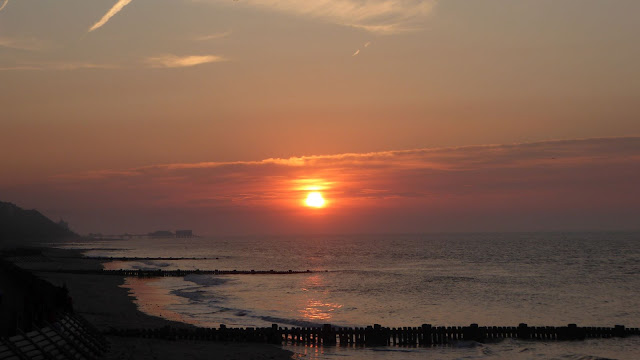 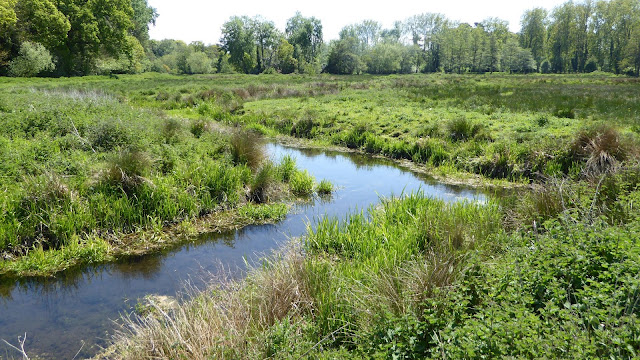 These photos were taken last Thursday on Coltishall Common.  I'd gone to meet a couple of old friends for lunch and, arriving early, had a wander around the green and pleasant cow-pat festooned lands of the common, complete with the pat producers.
At one point, they had blocked my way back, the only calf standing right in the middle of the path staring at me.  So, to prevent spooking them and getting gored by their rather pointy horns, I had to walk all the way around to return to the gate. 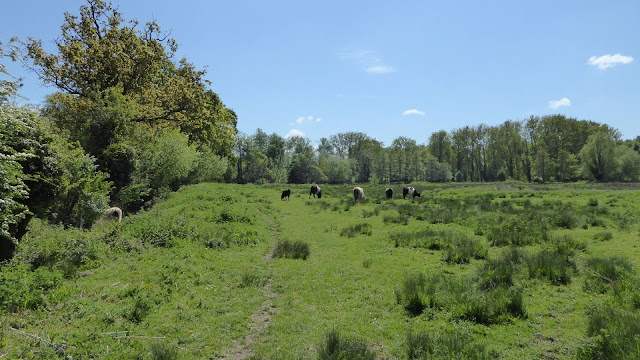 Fresh from debuting at Mistress Maddie's lakeside retreat, the cormorants have returned to their rightful place on the North Norfolk coast.  Well, two or three of them have, anyway.
I wonder if the rest stopped off in Devon...?

Anyway, I spied these three (possibly two, as the first one I spotted could have flown along the coast, overtaking me, before settling on a big, rusty knob at the end of a groyne) during Saturday's lunchtime wander.  They're sporting little head crests which is a sure sign of mating season!


Le sigh...  I knew it was too good to last.  Having not had one for a while, since the end of April I've been irked by a recent spate of "One Of Those Days"...


Thursday 25th April 09:30 - I got soaked while freeing some hippocampi (aka white horses) trapped in the revetments on Overstrand beach.

Saturday 27th April 10:02 - In the presence of my nieces, my big gobbed distant cousin, Svaathor da Vjis, blurted out that his nephew's daughter, Calreed, had a unicorn at her recent birthday party.  So, guess who had to arrange for The Little Witch and Vom Smallhausen to have one at their party. The. Very. Next. Day!  (I should have kept that one I found lurking in my shed a few years back)
Still, it wasn't all that bad, as it gave me an excuse to meet up with the exceedingly hot Gathiir (the Ipotane nephew of Svaathor), to find out where he managed to acquire a unicorn. 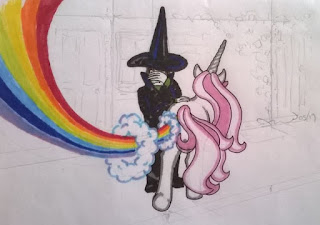 Sunday 28th April 15:24 - After The Little Witch and Vom Smallhausen's party, I found myself walking down Overstrand High Street with the unicorn in tow, taking it back to the pick-up point at the Nightship stop.
I was so embarassed.  It kept farting rainbows.

Tuesday 7th May 19:01 - Getting out of Car as I parked up outside the DeVice Mansion, I was unceremoniously kicked in the back of my head by a pegasus as it came in for a landing.  Luckily, it was only a glancing blow, but I still saw stars.  It had been sent by Svaathor to drop off Camera that I'd inadvertantly left at his place the evening before.

This morning 05:29 - Woken up far too early by the wind whistling through the horn of an errant Shâd'havâr.  Quite what it was doing on the lawn under my bedroom window, I don't know.  Luckily, that cock pheasant took a disliking to it, and chased it off down the road, leaving me to return to the land of nod for another hour or so.

Posted by Inexplicable DeVice at 10:17 12 comments: 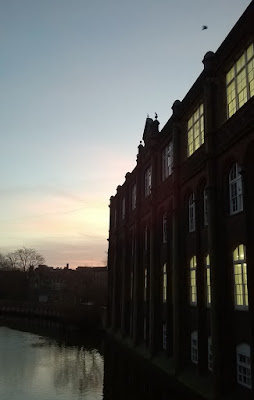 Disclaimer: This is not an attempt to cause Ms Scarlet more cormorant-related anguish.

In keeping with the recent general theme of birds - and, in particular, Mistress Maddie's more specific cormorant-containing posts - the first part of this post is my most recent cormorant sighting.
The photos are a bit crap because they were taken with Phone, not Camera, as I was walking through the city on my way to work.  Yes, through the city!  These cormorants were perched atop the Norwich University of the Arts*, lording it over the mallards and Egyptian geese that were grubbing around on the riverbank beneath them.


I must point out, that these were taken in February, and I haven't seen a cormorant since.  Perhaps Ms Scarlet has a point, and that England's cormorants have flown across the pond since then?

And now on to other things.  The following are just a few photos from the Bank Holiday weekend's leg-stretchers.
First up - Saturday (and what a difference from this time last year): 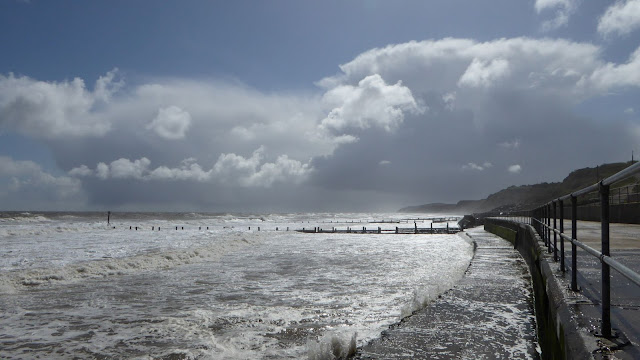 Labels: Beach, Blogorati, Broom, Cormorants, Groynes, Holidays, I We Me Us, Ms Scarlet, Norfolk, North Norfolk, The Science Bit, Triffids and such, Wildlife


I was on my way back from stretching my legs, when I remembered that I had some photographs of a tawdry nature that I hadn't shared with you all yet.  I meant to add them to the end of the previous post, but forgot.
Rather than edit the Pensthorpe post and sully it with such lewd subject matter, I thought I'd just create a new post.  So here it is.  Smut!


To save you from looking at that Star Trek stuff in the last post for too long, I have thoughtfully sorted out some photos from Thursday's trip back to Pensthorpe.  Yes, I was dragged back there by Inexcuseable, with Count Podgekinson in tow, for a lovely family day out.
It was OK, I suppose...

It's A Faaaake! Not the Art of Star Trek : Oops-a-Daisy!

It's Star Trek time again!  (I knew you'd be pleased)

These are my efforts for the TrekBBS Fan Art April Art Challenge "Oops-a-Daisy!".  But first, the theme of the challenge, as set by me because my Disco78 won the March art challenge:


Our heroes almost always manage to save the day - sometimes only by the skin of their teeth (and with a lot of technobabble) - or get to the end of the episode in one piece without a bathroom break or a hair out of place, but what if they didn't?

This month's art challenge is to depict a Star Trek something that didn't quite go to plan. For example: what if Nurse Chapel hadn't dodged that Spock-propelled plomeek soup bowl? What if Scotty hadn't managed to get the spacedoors open before the Enterprise reversed into them? What if Sisko hadn't managed to convince the Prophets to dispose of the Dominion fleet before they exited the Celestial Temple?

The size and scope of the "Oops!" is up to you, and you can illustrate something that was (just) avoided on-screen, in TrekLit, or from your own Trekmagination. The only "Oops!" that won't be accepted is "Oops! I ran out of time to create something this month.

I'd planned to do four pictures featuring hapless redshirts coming a cropper due to various malfunctions: Turbolift Malfunction, Wardrobe Malfunction, Kirk-Fu Malfunction (a forthcoming book will delve into the "Final Frontier's Most Feared Martial Art"), and Captain's Log Malfunction.

Here's the first one: Due to a turbolift malfunction, Deep Space Station K-7's Andorian security guard, Lt. j.g. Caddorshath ch'Thir, is helped down the stairs by some friendly Tribbles... (as with most things, click to embiggen) 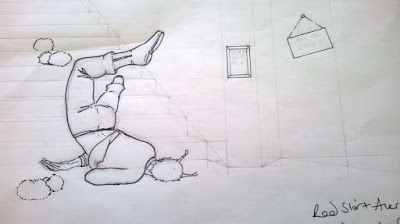