Just attempting a little Spring cleaning on the blog. The previous template has served us well over the past nine or so years, but we (well, most of us - The Host's SubC is a bit stroppy about it) felt like a change.

We're toying with replacing the title with one of the above, as we're not convinced of the look of the existing Crushed font (which briefly appears as Comic Sans before settling into the proper font). What do you think?

EDIT 20:06 - Let me know if anything looks a bit odd, or if things are too big/small/difficult to see etc. For example, I think the picture caption text may be a bit small - I can see it OK, just about, but then I'm looking at this on quite a big PC screen. Do any of you read this blog from a mobile/cell phone or tablet?
Posted by Inexplicable DeVice at 15:26 19 comments:

Under the Cake Dome


Don't mind me. I'm just trying out the cake dome I was given for my birthday a couple of months ago. With The Mistress on holiday, it's safe to bring out the cakes without them getting farted on. 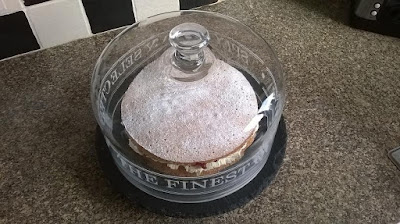 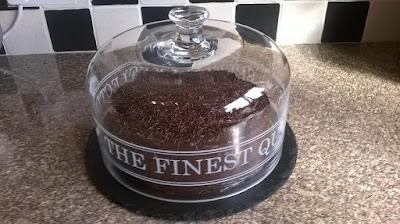 There. All done. That wasn't so bad, was it.

Posted by Inexplicable DeVice at 18:50 10 comments:

Please take us to the First Sirian Bank*


Here we are with the May book post, and not a Star Trek book in sight!

I bought this book after having read a brief review on io9 at the end of last year.
I found it to be quite a delightful look into the workings of a beehive, with the author's scientific knowledge of bees given a creative and engaging flourish. I particularly liked the emphasis on the bees methods of hierarchy, communication and senses.
However, I found myself frequently annoyed with the antics of the protagonist bee, whose point of view the novel focused on. Her many adventures seemed too easily entered into, and her transgressions seemed unrealistically unpunished (although not without consequence). All rather 'Mary Sue'.

The second novel of the Miss Peregrine's Peculiar Children series in which the Peculiar Children escape from their Welsh island home before it is bombed during World War II. This novel follows their adventures on the way to London in search of an ymbryne (kind of a witch) who can revert Miss Peregrine back from her bird form in which she's become stuck. Oh, and also while escaping the vile clutches of various hollows (monsters) and wights (monsters in human form).
While I rather enjoyed this second outing of the Peculiar Children, it wasn't as engaging or novel as the first - probably because the scene has already been set. Still, the old-timey photos were well chosen to illustrate the story.

22. The Dark Side of the Sun, by Terry Pratchett

I hummed and hahed about whether to read something from the DiscWorld, or a stand-alone novel, and eventually picked this (one of Sir Terry's first novels).
I love it for the imaginative concepts and world-building, and especially because the protagonist, Dom Sabalos, has a planet (The First Sirian Bank) for a godfather! The aliens are truly alien and the humans even more so, and some of the technology is truly indistinguishable from magic.

23. The Next Always (The Inn at Boonsboro trilogy), by Nora Roberts

This was a free book from Amazon after I'd spent a certain amount, or bought a certain book from some promotion or other. I don't normally read this kind of romantic-fiction-thing (chick lit?), but was mildly surprised by it even though it was a tad predictable.
A centuries-old inn in the town of Boonsboro is being renovated by three brothers, and, coincidentally I'm sure, three single women are thrown into the mix. Plus a rather matter-of-factly presented minor-character ghost - no occult mysticism or hocus-pocus, and no boring back story. Really quite refreshing.

Having seen the animated film some years ago, I thought it was high time I read the book.
It's quite different from the film, but I mostly think that's a good thing as books generally don't tend to translate well, word-for-word or page-to-screen, or whatever you want to call it.
I found it a little too 'young adult', but that's probably because I expected it to be an adult book, for some reason.


Well, Spring has well and truly sprung around Castlette DeVice! There's still a lot of green, but other colours are starting to come through now that the yellows, oranges and reds of the daffodils and tulips have been and gone.

Before we get to the ABC, here are some photos from the end of April:


So, on to the ABC: A is for Aquilegias 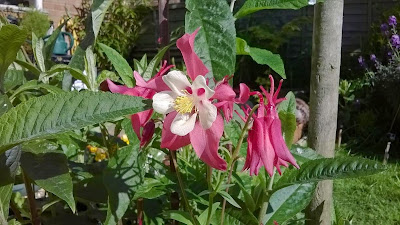 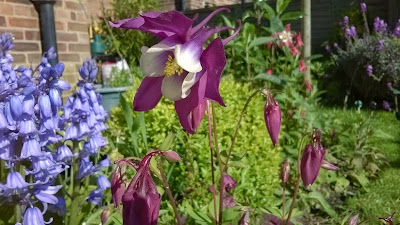 B is for Bluebells 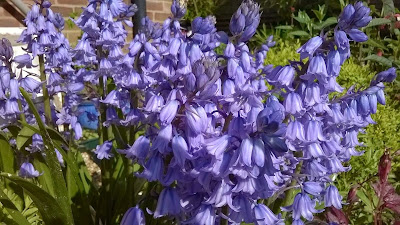 And C is for Cedric. What the hells..? Cedplop! Get out of the shot, you're ruining everything you little ruiner! Oh, and take my cup with you, there's a good plop. 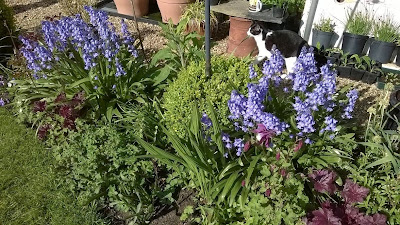 Sigh... Oh, well. Here's a photo of the blossom tree to finish off with: 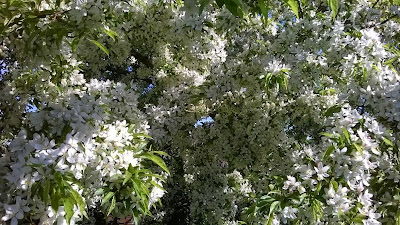 Posted by Inexplicable DeVice at 09:58 4 comments:

Not the Hats of Barbara Cartland II: The Collectors' Edition


I swore I wouldn't go to another wedding unless it was someone very close to me who was getting married (emotionally and geographically), or it was guaranteed to be a spectacular disaster, destined to have shakey, handheld videos of which to be endlessly repeated on Harry Hill's You've Been Framed, endlessly.
So, you can imagine my horror when I discovered that I'd soon be attending the wedding of a couple I'd barely heard of which was guaranteed to be thronged with countless people I don't know, and, to top off, wasn't even local!
How is my attendance to this smug and indulgent social occasion pretty much guaranteed? Because I am the 'plus one' to someone I can't say no to: Thunderfly, a weather warlock I have a small crush on to whom I owed a favour that he had the audacity to call in!

Anyway, after a lot of whining and foot stamping, I resigned myself to fly half way across the Cusp with Thunderfly to this wearisome wedding on the proviso that he does all the social stuff while I lurk in the background and indulge in copious amounts of gin.

On the plus side, I get to wear a new hat!


I just can't decide which one. From the above collection, Fillet de Tampon is taken - it was snapped up by Ms Scarlet, and Pork Scratching is on hold for The Very Mistress MJ.
Then there are these 'inspired by nature' hats which are being prepared for inclusion in the collection:

Posted by Inexplicable DeVice at 10:11 9 comments:


As excuses for not blogging go, I think dealing with an increasingly voracious Beaky takes some beating.

The increasingly uppity little shit has fathered a new brood of unspeakable evil, and is proceeding to eat me out of house and home castlette. I can't think of any good reason why I continue to put up with his incessant demands and his wife's shrillness, but I can't bring myselves to get rid of him. I have an inkling that he has me under some sort of thrall...

Posted by Inexplicable DeVice at 10:45 9 comments:

"I'll wee on your toast"


Due to a somewhat hectic schedule, I'm still working on the post that I'd hoped you'd see here. Still, the Smack the Pony girls should keep you entertained in the meantime:

Posted by Inexplicable DeVice at 06:18 8 comments: