It's A Faaaake! Not The Art Of Star Trek - Treasure Map

...continued from X Marks The Spot

This is the "making of" of my Star Trek treasure map, as featured in the last post (and linked to just up there ^).  It came about thanks to the monthly Star Trek Art Challenge over at the Trek BBS that I frequent when I'm not here.  Specifically, the "Treasure Map" theme was chosen by me for May's challenge because I won April's with my clumsy Andorian ("won" is probably the wrong word - after all, it's the taking part that counts - my Andorian picture just got the most votes, that's all).


A brief sojourn to Wikipedia tells me that May's birthstone is the emerald. Ah, ha! Precious stones! Treasure!
So, I thought this month we could try our hands at map making. But not just any old map - a Trek treasure map! Maybe a map like the ones featured in Romancing the Stone, or The Goonies but filled with Trek terms ("Here be Gormaganders" and the like)? Or something more futuristic in keeping with the era of Star Trek of your choice, like an okudagram?
However you decide to do it, the challenge is to create a star chart, geographical map, floor/deck plan etc. that promises a Trek treasure or secret to whoever successfully navigates its course.

I began working on my map remarkably early in the month - the 11th May, to be precise.  I knew that my vague ideas were quite [adventurous], so I'd need plenty of time to work everything out.
As with many things in life, click the images to embigulate! 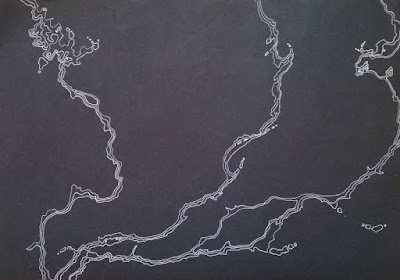 I'm wasn't exactly sure what the finished article would be like, but I had some ideas involving pin-pricks and space-lanes and telepaths. Also, being so early in the month, I thought that this first set of squiggles might just end up as a trial run, with something else as my finished piece. 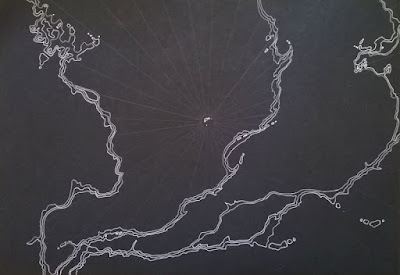 After setting down a few white outlines, I didn't spent much time on my treasure map for a week. Well, I tell a lie, I spent a lot of time procrastinating in the name of research: Searching Memory Alpha for star charts and telepaths, plus trying to work out where certain stars and planets might be located (including getting caught up in the ST Generations stellar cartography scene screenshots at TrekCore), as well as trying out fonts etc.

By the 19th May, I hadn't got much to show, except that I was set on using the Holy Rings of Betazed as the treasure, which meant I also had to feature the planet Betazed itself.  I also chose to depict the locations of the Medusan's homeworld, and that of the Deltans: 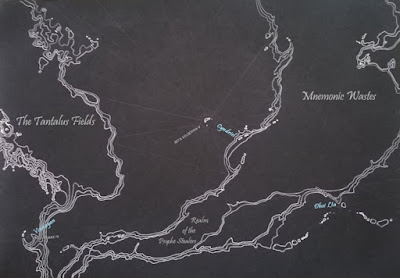 [fonts: Pristina (script) and High Tide Sans.
I don't know who created them - they came with my PC] 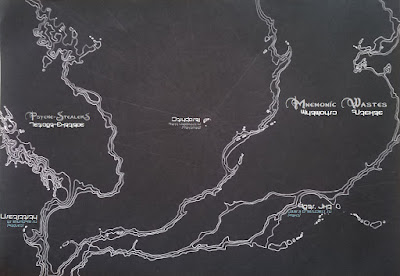 [fonts: Betazed, and Microgramma Medium Extended
(as used in Star Trek as well as many other sci-fi properties)]

By the 27th, I was trying out some finishes in FotoSketcher (above & below), and had come up with a backstory for my map (i.e. the X Marks The Spot story from the last post) 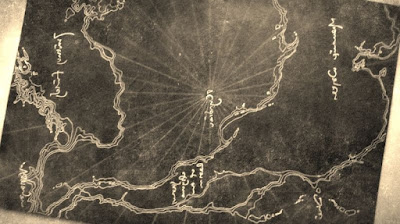 Then, on the 29th, I finally finished the physical map by adding various space "monsters", and pricking it full of holes!  I just had to work out how to make it look like it was displayed on bridge monitors of the "commandeered" starship, USS Sword of Omens (a ship of the same class as the USS Balmung, which was named after a legendary/fictional sword by its creator, Dan Uyeno).  These were my three ideas:


This is an old photographic image from the archives of the Fifth House: 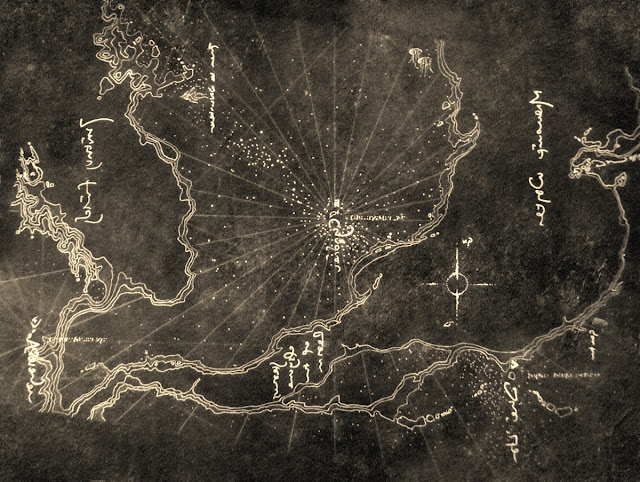 This is a cleaned-up version courtesy of the Sword of Omens' astrocartographer
(and the ship's computer): 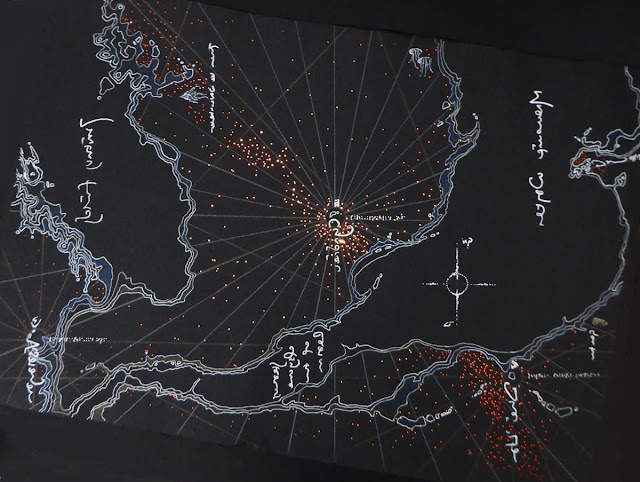 And this is an enhanced, partially translated version, complete with a projected course to the planets where the Holy Rings of Betazed are thought to be hidden: 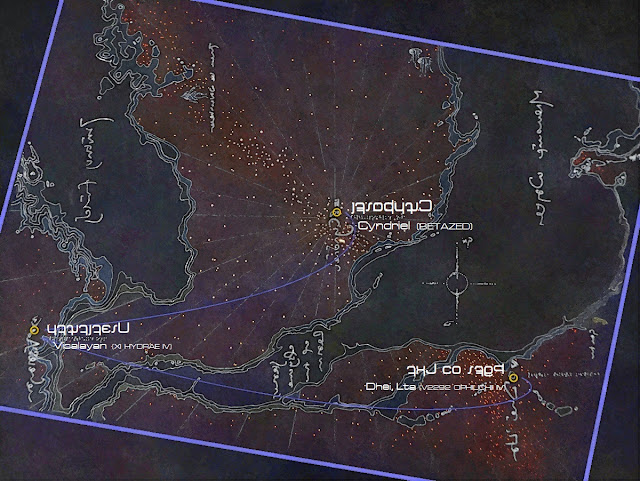 As this is a Betazoid map, I've labelled it in an historic Betazoid language (which I've totally made up - the "calligraphy" is a very mildly stylised version of my handwriting mirrored, then turned 90 degrees widdershins), with the computer overlay in the current Betazoid main language (again, made up) and its Federation Standard translation.
(Cyndriel and Visalayan [the Medusan homeworld] are from Lora Johnson's Worlds of the Federation, and Dhei [AKA Delta] is from Christopher L. Bennett's Watching the Clock)

The final map is featured in the previous post (a less wonky version of the one above) - It didn't get the most votes this time, so I didn't have to come up with a theme for this month's challenge, fortunately (the chosen theme is - rather topically - LGBTQ in the Trek Universe!)

And that, you may be pleased to hear, is that!

Posted by Inexplicable DeVice at 20:54