And the eyes have it

I can tell you're all on tenterhooks waiting to find out whose eye it was. Is, in fact. After all, he's still alive to the best of my knowledge... 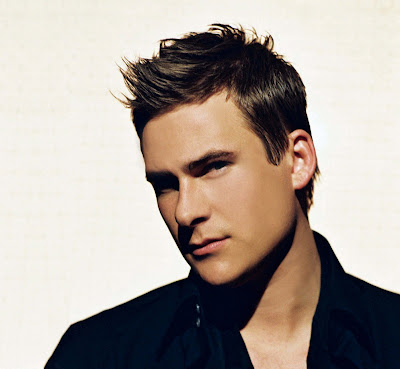 It's the brooding and sultry Lee Ryan of Blue fame. He reminds me a bit of a young Connor Trinneer... 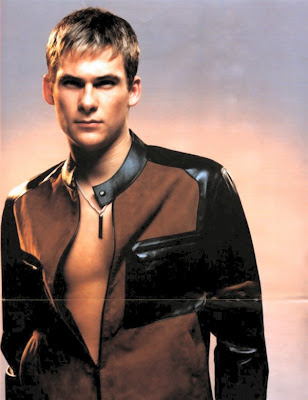 Posted by Inexplicable DeVice at 20:06 21 comments:

Labels: Crush, Not my usual fare 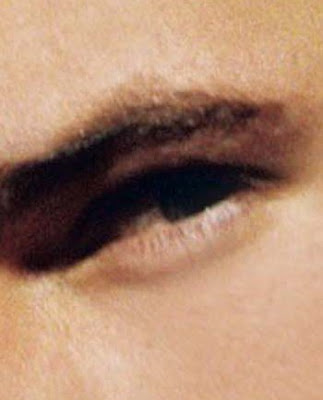 And if you think you'll win a prize, forget it!

P.S. It belongs to a minor British celebrity, if that helps. Actually, I don't care whether you guess who it is or not. I'm only posting this because I've got shit all else to do.

Posted by Inexplicable DeVice at 20:30 13 comments:

Labels: Not my usual fare

OK, so the Freakin' Green Elf Short film has been sent off for developing. 7 - 14 shitting days to process.

P.S. For a rather splendid emo joke (albeit seen before at m'Lady's), pop over to Tazzy & Piggy's (today's post).
Posted by Inexplicable DeVice at 20:47 16 comments: 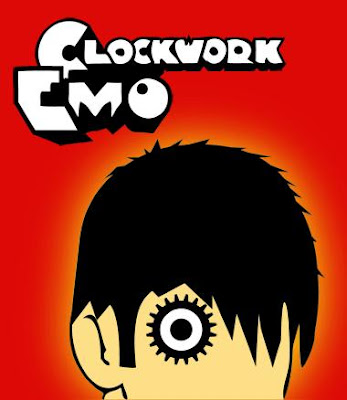 I found this while searching for pictures of clockwork octopi. Amusing, isn't it?

I know I was going to post about the Clockwork Octopus, but I want a good picture to go with it. And seeing as how I used up all my black and white film on those damnable 'Shorts, I can't take a photo of the clicking, whirring thing that's taken up residence in my waterbutt. I was going to draw a picture, but that's just too much hard work, plus I have no way of getting it inside this infernal Demon Box - I don't think this little drawer in the humming box next to my screen is designed to take paper, no matter how much I fold it up.

There's no way I'm doing a pic in Paint either - far too complicated...

I don't know who came up with this image - I went back to Google images and searched for a while, but there're only so many emo pics I can stand before I either give in and join them, or translocate the 'Box into the Dungeon Dimensions.


Hmmm... I'm no longer feeling amused. Feeling a little depressed actually. Is that a stanley knife I can see?
Posted by Inexplicable DeVice at 11:52 17 comments:

Right. I'm off to the site of Dr. Frank n Furter's castle to see if there're any more Rocky Horrors lying around.

Well, I need a house boy. I'm sick of doing everything myself.

Anyone know which way Denton is?

Posted by Inexplicable DeVice at 11:56 9 comments:

I've been rushing around like a blue arsed fly getting shots of The Freakin' Green Elf Shorts, taking pictures here, there and everywhere. I finally finish the reel of film - No, I don't have a digital camera. Yes, I know I'm a technological retard - and rush it off to Boots to be transferred on to a disc.

"Can I have it processed by this afternoon, or tomorrow?" I ask.

"No" says the man at the photography desk. "You see, this is a black and white film. We don't process these on site."

I'm momentarily stunned. I manage to look at the camera in horror. Then it occurs to me: It's not really a black and white film, the silly old fool just thinks it is because it's in a disposable camera that just happens to be black and white. Just as I'm about to tell him the error of his ways, he beats me to it.

"We've had this a lot" he says. "These black and white disposable cameras really do have black and white film in them. Look" and he points to a microscopic label on the back that confirms it.

"But... But I thought it was just the style" I almost whimpered. "Like those silver ones, or those lurid fuschia ones?"

Aaaaaaaaaaaaaaaarrrrrghhhhhh! Queynting Hell!!! But I manage to hold that in and say: "Oh, I see" instead. Shit.

"If you're not in a hurry to get it developed, the black and white films are picked up on tuesday and taken away for processing. They'll be back in two weeks."

I expect he saw my barely contained rage and wanted me out of the shop before toiletries started flying off shelves and light fittings exploded, showering customers in glass and shards of hot metal, so he suggested: "There are places in the city that can process it faster, sir."

I smiled over gritted teeth. "Thank you" was all I could manage before stalking out. I was so enraged that I didn't even look twice at the hot, T-shirt straining muscular skin-head by the door.

Well, we didn't go and see Indescribable yesterday, which was a bit of a relief. The Father said the weather wasn't going to be too good, so we couldn't have a picnic by some fen somewhere - I don't know what it's called/where it is, as I was trying not to listen to him.

However, the weather turned out to be quite delightful. Ha!

I did have to suffer the ignominy of the manual labour at The Parent's today, though. More on that in a couple of days when I get the photo's sorted out...

I arrived back home to find that...

... the house was full of noxious fumes. Opening the windows and doors, and fanning the smog with Broom, revealed this:

Holy crap! The Freakin' Green Elf Shorts had escaped from their metal prison!

I rushed through the house to find them just about to squeeze through the bathroom window. Not wanting to touch the vile things with my bare hands, I held out Broom in an attempt to snag them on it, but Broom wasn't having any of it and twisted away. I watched in shock as The 'Shorts slid out of the window and into the garden. Even the rose bush and the passiflora had the sense to recoil out of the way.

How will I ever find them now?

Posted by Inexplicable DeVice at 16:17 15 comments:

I dropped in on The Parents yesterday. What a mistake!

I found half the back garden dug up and The Father was shovelling gravel into the cement mixer.

Before I could make a hasty escape, The Father saw me.

"Ah, Son-Who-I-May-Yet-Turn-Straight-By-Means-Of-Excruciating-Manual-Labour" he said in greeting.

"You're off work next week, aren't you?" Without waiting for me to answer, he went on: "Can you come down on Thursday to help your Mother and me lay the concrete for the new patio?" The Mother just looked skywards in resignation from her position near the crocosmia.

"And, of course, you'll come with us on Wednesday to see your sister Indescribable, won't you." It wasn't a question.

In the late eighteenth century, the Queen consort Charlotte bore a son, her ninth, prophesised to rid the world of vampires. However, knowing her child would be at risk from the vampire community, she hid him in a blood orange growing in the palace's orangery.

Safe in the sun during the day, and watered with holy water at night, the blood orange tree flourished, producing a single blue fruit every year.

As the years went on, Queen Charlotte lost her mind* and the unique nature of the blood orange tree, along with the instructions for its care, were lost in time and outdated superstition.

It wasn't until I took a wrong turn on the way back from Europa** that the prophecy was thwarted.

Coming out of the cloud cover, I didn't have time to pull up, and crashed through the orangery glass and into the tree, my mouth open in surprise. Which, in hindsight, was a fortunate lapse in etiquette, as I ended up piercing the fruit with my fangs. It's bloody juice filled my mouth and I swallowed before I could stop myself.

As you should all know by now, I'm not a spitter by nature. It's uncouth.

Anyway, after extricating myself from my predicament, Immolation and Infernal DeVize stopped by to say thank you.


* Well, it was in her head which was chopped off because she was accused of being a witch. Of which she was, of course. How else do you think she managed to get a baby inside an orange?
** I indicated to turn left before I should've done, so had to turn, lest I feel the other commuters wrath.
*** Again, not really incest!
Posted by Inexplicable DeVice at 12:35 9 comments:

I have just watched Flight of the Navigator for the first time in years and nearly blubbed. It was only my iron will and lack of blinking which prevented me from becoming a soggy mess.
It's a good job we witches don't tend to blink. Instead, especially when 500 feet up and travelling at a good rate of knots, we use those little ducts in our lower eyelids to squirt moisture on our eyeballs to keep them moist. A witch can miss an awful lot while blinking. Helen Adams would definitely not a good witch make!

Oh, and another thing. I've joined the ridiculousness of Farceparty. Well, I'm sick to death of waiting for Knight, and I can't find anyone suitable in the real world, so cybermaspace** it is. Watch out Gaydar - You're next!

* by D H Lawrence. It may have been called something else...
** Don't worry Tim. You can breathe a sigh of relief. I'm not coming for you.***

*** Yet. We'll see how well this goes. Just don't clutter up your windowsill just yet!

Posted by Inexplicable DeVice at 22:44 20 comments:

Labels: Crush, I We Me Us, The Science Bit

A pox on my carbon footprint

I was thinking of getting a new runaround for nipping to the shops in.

What do you think of this?

Posted by Inexplicable DeVice at 11:19 5 comments:

Labels: Not my usual fare

A Clockwork Octopus and The Royal Blood Orange.

Maybe not at once, though.

Posted by Inexplicable DeVice at 17:12 6 comments: