Now that I've managed to get one hastily slapped together post published (yesterday's groyne monitoring shenanigans), it's time for another.  Yes, more Star Trek related nincompoopery with my entry for March's Trek BBS Art Challenge.

But first, a quick aside:

Thank you, Ms Scarlet, for my Universe on a Chair!
I shall endeavour to rule it wisely, and not get carried away with
delusions of grandeur or a full blown attack of megalomania.

I have already been doing some tinkering with the Universe,
as you can see below. But only the bit that can be seen from
the spare bedroom of the DeVice Mansion.


And now, the feature presentation:

Here is the Star Trek art challenge as set by February's winner:


I recently took a look at old art contests. Back in the day, whoever started a new contest would include a long list of previous contests. It got me to thinking about something I always was curious about Trek. One of the images I always found intriguing....those starbases big enough for the Enterprise D to fit inside.

I always wished we got to see what they've got in there. We've heard about how the Galaxy Class starship are pretty much cruise liners of the fleet. But the accommodations and amenities we saw on the Enterprise D most likely pales in comparison to what we would find in one of those starbases pictured above.

At the same time, I was thinking about the upcoming St. Patrick's Day and how some folks like to go to bars and drink green beer. So lets imagine what kind of places we might see folks, both Starfleet and civilian ,could go and celebrate something like St. Patrick's Day aboard such a starbase.

It can be anything from a scene of a room full of people having fun, to a sign, to a "trekkized" beer draft counter.

Leaving it until the last minute yet again, I found a little time on 28th March to sketch out an idea I had: Cetacean Opera (a play on the Starfleet facility/department, Cetacean Operations, aboard the Enterprise-D)!  Although, I  wasn't sure what the celebration was supposed to be.  Maybe it's a musical version of an important first contact to celebrate its 100th anniversary? 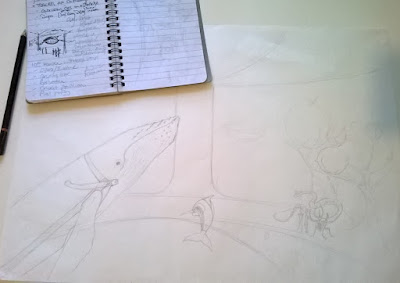 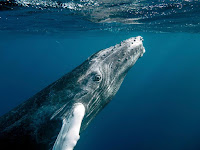 Although, in this case, it's cetaceans (perhaps George & Gracie's offspring?) at the opera rather than performing in it. The humpback whale and dolphin are wearing not-yet-finalised (i.e. completely rushed) Disco Maroons which I'd hoped to have designed for last month's Mix and Match art challenge. I'd planned to work on them at the weekend, along with attempting to make it clearer that the whale and dolphin are in a giant tank, rather than floating in mid-air...
But then I put the Cetacean Opera picture on hold as I had to get something out of my head: Disco78 - a Calvin and Hobbes inspired Starbase disco: 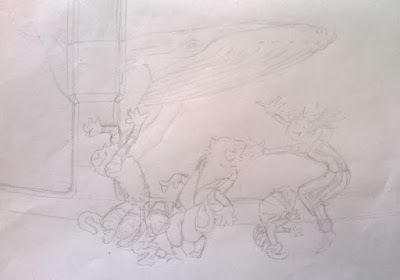 Here we have a sketch of a couple of Caitians, a couple of Ithenites, and an Andorian getting down to classical Cetacean Opera played at 78 rpm.  Harpo the Humpback whale looks on in amusement.
I was concerned that I wouldn't finish it as I couldn't find my fineliners to do the outlines, but had already invested myself into it and hoped to fashion it into some sort of celebration theme for the challenge (as I very much doubted that I'd find the extra time to finish Cetacean Opera picture).


If I'd pulled my finger out and started this earlier in the month, I'd've drawn a bigger scene, making it obvious that this is set aboard Earth Spacedock. I also like to think that I'd've put the Caitians and Ithenites in original poses (rather than copy those that Calvin and Hobbes struck in "Something Under the Bed is Drooling" - but I still would have drawn Hobbes!), and added a few more disco divas (in and out of Starfleet uniforms)!
This was the first time in many, many years that I'd used marker pens, but as I'm not confident with them yet, I only used them for the background and Harpo's uniform. The rest of the scene was coloured with my trusty pencil crayons, and I used a white gel pen for the distant spacedock interior lights that can be seen through the cetacean tank, the Champagne bubbles, and for the characters' teeth.

Posted by Inexplicable DeVice at 20:00