No, there's nothing wrong with all the technological gubbins that enabled me to come back to Blogland. Instead, the "imminent crossing over of a very close relative of SP's" as I mentioned in the last post, has happened. So, needless to say, I've been occupied with things other than blogging. However, we have had an unexpected trip over The Cusp and a couple of paranormal close encounters, so I shall be recounting those 'adventures' in due course.

In the meantime, I hope you are all well and firing on all thrusters. See you soon!
Posted by Inexplicable DeVice at 09:11 7 comments:


Yes, we're back! All four of us - Thankfully, we managed to lose that interfering old baggage, Audrey, somewhere in the ether.
While we're pleased to return the realm of Blogland - via the wonders of a wireless router (that was surprisingly easy to set up once we got hold of an ethernet cable that actually worked) - it seems someone is even more pleased, eh Tim? 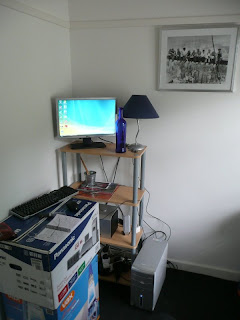 Anyway, back to the point: This means, of course, that I won't have to surreptitiously blog from work - Although, never say never. Instead, I can blog from the uncomfort of my - sorry SP - our home. I say "uncomfort" because, as you can see in the picture, the study is bereft of comforts such as a desk, chair, houseboy etc...

Suffice it to say, I won't be online for long each time I log on due to the general physical aches caused by the distinct lack of ergonomics. Plus, due to the imminent crossing over of a very close relative of SP's, I won't be about every day as I'm trying to be as supportive as I can. All be it in my emotionless, robotic, cold-fish way.
So, before this gets too long-winded, I'm thrilled to be amongst you once again, and I'm looking forward to catching up on all that you've been up to.
I'm sure you've all been good...?

Posted by Inexplicable DeVice at 17:57 14 comments:

Labels: Castle DeVice, Crush, I We Me Us, Public Service Announcements, SP

* Brrrriiing brrrriing - Brrrriiing brrrriing - Brrrriiing brrrri- *
“Hello?” a frail old voice answered. Momentarily nonplussed, I didn’t respond. “Is there anyone there?” she asked.
“Ummm…” Oh, great start. I rolled my eyes with some assistance from The Host’s SubC. “Ummm… I don’t suppose Lucifer’s home, is he?
“Who, dear?”
“Lucifer. Um.”
“Lucy? Eh?” There was some rustling before the voice muttered “Let me turn my hearing aid up...”
“Look” I said getting a little impatient, “Is he in? Are you his mum?”
“Oh, no, dear. I don’t have any children” she said.
Bugger, I seethed to myselves. I must’ve dialled the wrong number. Before I could say anything else, the old woman resumed talking.
“Ooh, there was that nice young man who lived here before me? I can’t remember his name. He had a lovely tan, though. If a bit on the red side. And a bit pointy, as I recall. Especially his hair. Looked like horns, it did!” She paused, but only for a second. “D’you know, it’s three years to the day since he moved out and I moved in. Fancy that! The old memory isn’t as bad as I thought.”
Weary from her diatribe, I tried to cut her off. “Excuse me. Do you have a forwa-“
“Oh!” She suddenly exclaimed. “And he had ever such a long-”
I shuddered and slammed the phone down before my imagination could run riot with whatever embarrassing horror the old bat was about declare.
Posted by Inexplicable DeVice at 00:01 9 comments:


We are experiencing technical difficulties - Normal service (i.e. last year's levels of posting and commenting) will be resumed shortly.

Setting up a wireless router shouldn't be so complicated. Although it may have something to do with the lack of internet access through an ethernet cable. I'm on the verge of screaming and giving up, but as I'm at work right now, I don't think I'd better. I just hope that SP has sorted out the technical jiggery-pokery by the time I get home today. After all, you may have some recollection of my technological retardation.

You may ask why I don't just plug the Demon Box into the internet via the ethernet cable. Well, I can't because it's right next to the TV and I'm not blogging while SP lounges in front of the telly with the volume up full blast. Besides, if I'm within earshot, he'll keep talking to me or asking me to do things (like "What's for dinner?", or "Can you walk and feed Moom?", or "Let's have sex.").
So, until such time as I can blog upstairs out of the way, I won't be blogging at all, except from work, like today.

Posted by Inexplicable DeVice at 13:47 7 comments: