It's A Faaaake! Not The Art Of Star Trek - Revenge of the Baby-Sat


I threatened you with Star Trek, and now I'm here to follow up on that threat.  Ta da:

In Star Trek it often seems like the adventures we see onscreen are only the tip of the iceberg. In the series' we also hear of many other events that have occurred but that we never actual see.

So, for July's Art Challenge your task is to depict one of these unseen events from Trek's history. You could create a ship for which we've only heard a name. Maybe show what happened during the Talarian Conflict* or the Battle of Klach d'kel Brakt. Or something more character orientated; Spock and the Klingon Mindsifter, Emony Dax meeting McCoy, or that bar where the girls are so...😉

* It's possible that this conflict should involve the Tarellians, not the Talarians.

I finally got around to doing something about July's Art Challenge on Thursday.  Yes, Thursday 2nd August, not July! (Thanks to the challenge setter for extending the deadline)
While I had an idea, and an extremely rough sketch around the middle of July, I hadn't actually done anything more because of the dratted weather. Like many places, the UK has been (and still is) basking in above average sunshine and temperatures which makes anything but flinging one's self into the sea at any opportunity (rather than, say, sitting at a desk and drawing) quite absurd.
Anyway, this is my first foray: 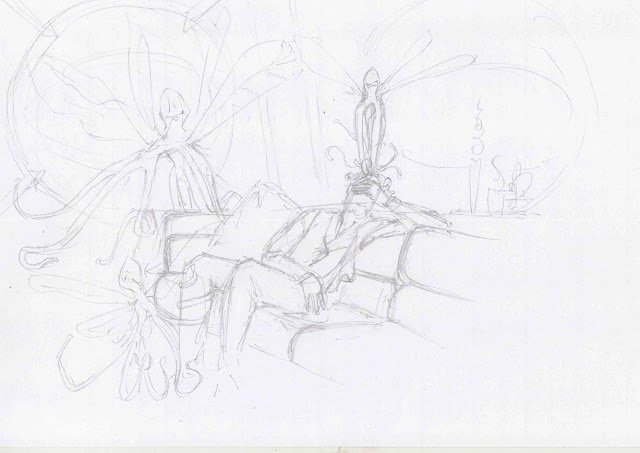 It's probably not immediately obvious which "Unseen Scene" this is - Especially if one isn't a Star Trek fan.  Don't worry, I'm not going to make you guess. 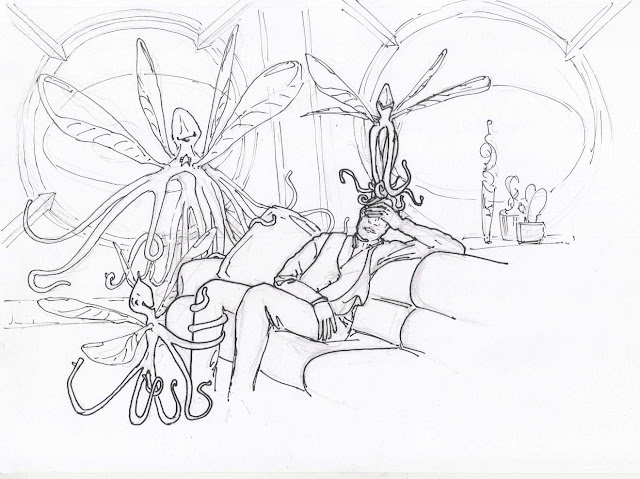 For July's Art Challenge, I chose to illustrate a scene of Jake Sisko baby-sitting Vilix'pran's budlings, as mentioned in the DS9 episode "Business As Usual". If I was to have made you guess what the above sketch depicts, the only vague clue (I think) are the hastily drawn (and rather shoddy) viewports which are unmistakably of Cardassian design, and therefore from Deep Space 9!
Anyway, here's the very rushed coloured version: 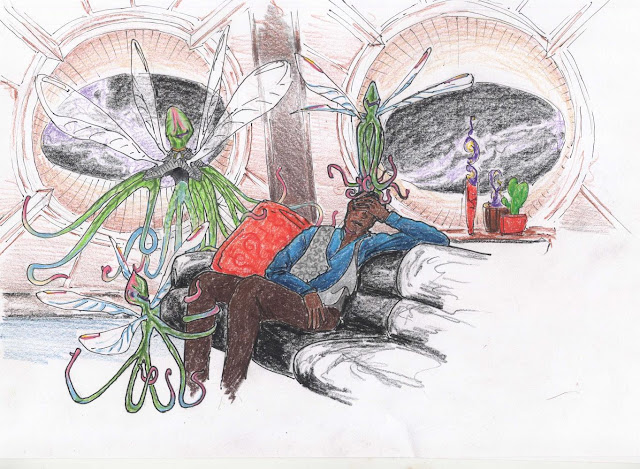 I was going to call this "Adventures in Babysitting" after the film (and even labelled it as such, complete with an erroneous "August" rather than "July"), but I haven't seen the film so I didn't really think it was appropriate. Jake's wearing his outfit from "The Reckoning" which, I think, is one of his least objectionable, but his face (at least the lower half) looks more like Old Man Jake's from "The Visitor" (I drew him with his hand over his eyes as I'm rubbish at faces). 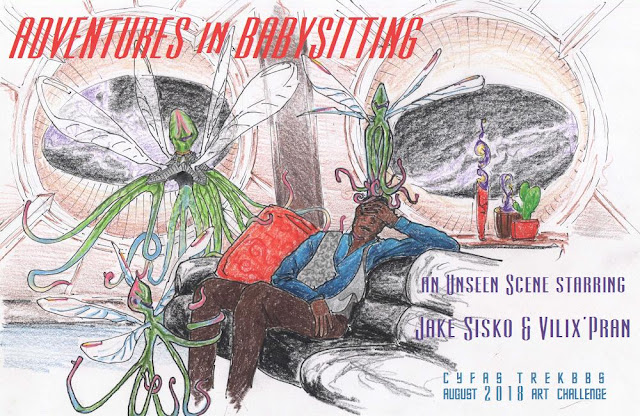 As for Vilix'pran and his twin budlings, the design is close to what I had in mind, but it's not quite there yet (a preliminary sketch appears here, from April 2017). I need to spend more time thinking through his biology etc. Also, the things that look like heads aren't - they're pseudo-heads. Just like starfish, Vilix'pran's species have eyes at the end of their tentacles, and a scary-looking mouth in the centre of their underside.

And my final entry (title shamelessly nabbed from Bill Watterson's 5th Calvin and Hobbes collection, as is the lead cartoon strip image), which won! (so I get to choose the theme for this month's challenge): 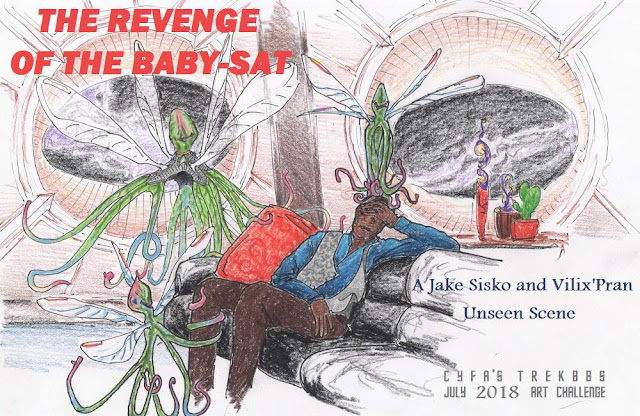 Posted by Inexplicable DeVice at 19:59