It's the beginning of another month, so you you know what that means: Star Trek time!


In Times of Crisis…

As we’ve all seen, 2020 hasn’t been such a stellar year up until now. We’ve got a pandemic on our hands, social unrest, a climate that’s going haywire… The list goes on.

But we’re here for something else. Something optimistic. Something better! June is Crisis month, and I ask of all of you, should you choose to tackle it like it’s nothing, to show us what the Federation does in times of crisis. Show us the heroics, the sacrifices, the lone ship sent to rescue the Kobayashi Maru that started it all.

In short: show us the best that the species can get while helping each other!

This theme, as set by the winner of May's art challenge, had me stumped for the first week or so.  I didn't want to depict a crisis - I didn't want to deal with fighting, and sacrifices, and destruction even if someone (or some people) were going to turn on the heroics and effect a daring rescue.  However, I didn't want to sit this one out, either, so I started to think about the big crisis events that had rocked the Federation, wondering if I could somehow get around the actual event itself.

The first thing that came to mind were the various Borg incursions (of 2366/67, 2373, and 2381), but they seemed unremittingly grim.  Then the 2387 destruction of Romulus popped into my head - as briefly shown in the 2009 Star Trek reboot movie.  But it was the evacuation prior to destruction - as alluded to in the latest Star Trek series, Picard - that got my attention.  I thought I might portray the Federation in a more positive light than the cynical, distrustful, self-centred organisation as seen in (the really quite loathsome) Picard. 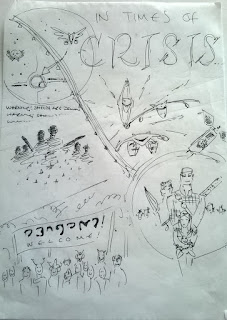 However, I couldn't think of a singular image or scene that would depict what I wanted to convey: the cause of the evacuation, the Romulan refugees, and the welcoming Federation.  The apparent need for multiple images soon had me thinking that something like a comic strip or page from a comic would do the trick.
So, after making some quick notes and doodles of the scenes I wanted, I set to laying them out in a comic page style.

First up, I wanted an imposing Romulan starship passing a Federation border beacon.  Then it would arrive at a planet with plenty of Federation satellites in orbit (to make it clear it was a Federation planet). 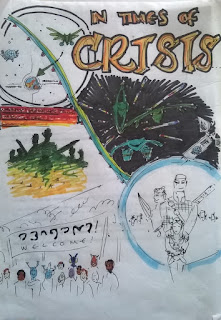 The next scene would be Romulans beaming down to the planet with what looked like weapons.  However, the penultimate image would show the transporter beam fading revealing the "weapons" to be treasured possessions instead (a lamp, an umbrella, gardening tools, part of an old door frame marked with dates and the heights of a child), and Romulans to be civilians, not soldiers.  The final scene would show a welcoming crowd of Federation citizens of different races.
Pleased with the first pass, I set to trying out some colour with marker pens.  I even did some research into Romulan script so I could make a welcome banner with "real" romulan text (rather than the made up stuff that just looks Romulan that I placed around the borders of those pixmit/pikhmit cards I made a few months ago). 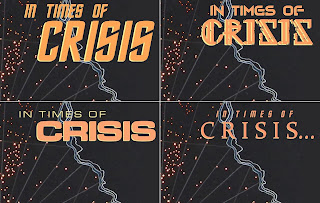 Putting off starting the final piece (because I wasn't quite sure of the drawing style to go with), I dithered about with some fonts for the title in MSPaint.
Clockwise from top left: Federation Classic, Lovecraftimus & Eternity Tomorrow, Federation Classic & Constantia, and Microgramma Medium & Bold Extended (the background is part of the star map I made last year).

Which drawing style to use was solved by one of the TrekBBS members saying "I do love that kind of style" after seeing a snippet of the half-coloured layout sketch.  Naturally, I latched on to this singular line of praise, because it was for my usual, non-concentrating, just-get-the-idea-on-paper style, so: quick and easy! So, I marked out the borders on a proper piece of paper (A4 size), pencilled in the scenes, and set to with marker pens. 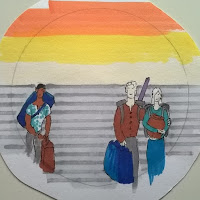 However, I rushed the last two parts - the background of the lower circle (which I thought the main characters weren't distinctive enough against) and the background & banner (spelling mistake! "Aerfvadh" instead of "Aefvadh") of the final "Welcome" scene.  The circular background issue was solved by carefully cutting it and the two minor characters out, and replacing it with a new, plainer backdrop with three characters to match up with the "beam-down" silhouette in the previous scene.
The spelling mistake was also solved by cutting out the original banner and replacing it with a new one.  I ended up leaving the final scene background because I couldn't be bothered to faff around any more.  Besides, I'm sure at least one of the welcoming committee of Andorian, Caitian, Aurelian, Trill, Kaferian, Betazoid, Vulcan, or human Federation citizens would have come a cropper by my scalpel! 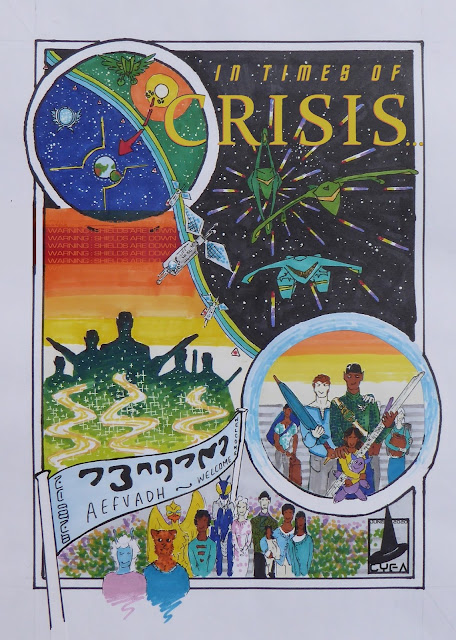 Anyway, that's June's self-indulgent Star Trek stuff out of the way.  You may now run along and find something less boring to do instead.

Previously on Art Trek (née It's a Faaaake! Not The Art Of Star Trek):

For other Star Trek art, see: