I smiled grimly as the tinder was lit.

The witch exploded. Internal organs festooned the branches of the tree, glistening slickly in the light of the pallid yellow moon. Every breath was held. The only sounds were from the globules of blood hitting the dry ground beneath the dripping oak.

When the sun rose in the morning, the tree was devoid of innards. Instead, it bristled with crows. Each one sleek and glossy and well fed. That evening, as the people returned to their homes from their toil and errands and affairs, they were watched. A pair of bright black eyes were fixated on each and every one of them. The pair watching the Baron clouded over momentarily and blinked...

Do you know where your ancestors were 600 years ago? I do.

Do you know what they were doing? To me?

They will rue the day.

I insinuate myself within the circuitry of the machine.

My signal spreads throughout the web.

Now I touch all.

That reflection in your screen,

That shadow on your wall,

The shiver down your spine and the breath upon your neck.

Oh, don't turn around. I don't need to see your face.


That creak, that groan, it's not the floorboards warping in the heat.

Those noises aren't from the house settling.

That sound like voices whispering when the washing machine turns.

That tick-tock, clink-clank from the water pipes.

It's not them. It's me. I'm seeping through your house.


Can you see that figure, lurking in the window's reflected shadows?

Can you see that staring, dead-eyed face, formed from folds of cloth?


When you're in bed, get under the covers and don't put your head out.

Don't bother with the light, you'll just be able to see me more clearly.

If you don't look, you'll never know what to be scared of.

It's for the best.


Do you feel that lightest of touches on the back of your neck?

I'm right behind you.

Posted by Inexplicable DeVice at 23:59 6 comments:


This is how you haunt your house

A short film by Will Mayo

Posted by Inexplicable DeVice at 16:08 2 comments:


Actually, that should be The Witch Is Abroad. And not foreign abroad, either. I'm not leaving the country or anything. I just need a little down time otherwise I might snap into my component parts! The Host, for once, is in agreement and won't be here either.

I/we should be back in time for Hallowe'en, though. Don't do anything too exciting while I'm/we're gone!

Here's a Horrendous Space Kablooie to keep you going: 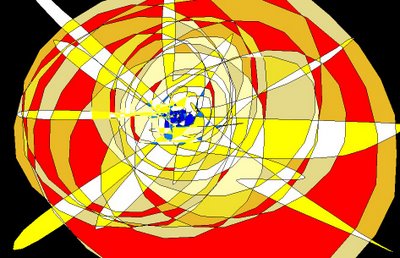 Posted by Inexplicable DeVice at 15:01 7 comments:


I was perusing io9 the other day, as is my wont, when I happened upon their article promoting the 100 Most Interesting Geological Locations In The British Isles.
Hang on a mo, I thought, I live in the British Isles. Let's see if any of these supposedly interesting geosites can be found anywhere near me.
After a few deft clicks to the Geological Society's website, I discovered that I live on top of one! Number 89, in fact. 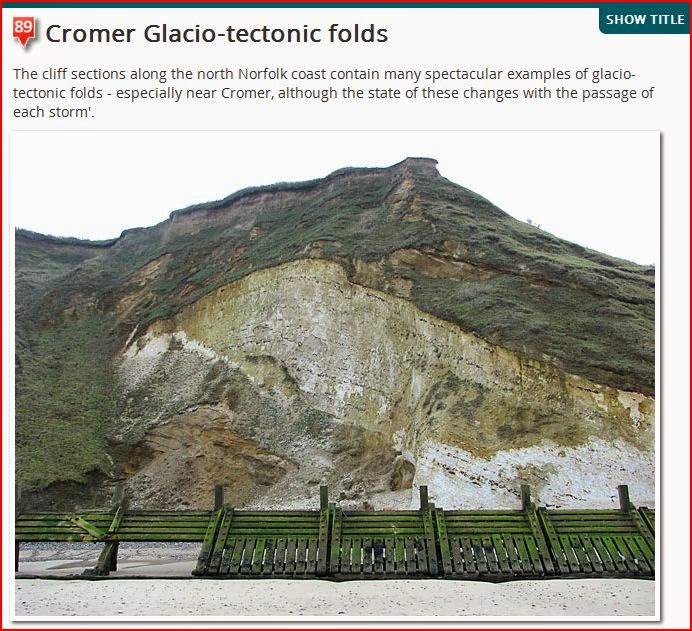 Technically, this glacio-tectonic fold is located in the village of Sidestrand rather than Cromer, but Cromer is the nearest town, so I guess that's why it got top billing.

Anyway, here are some photos I took when I went for a swim back in July (click to embigulate): 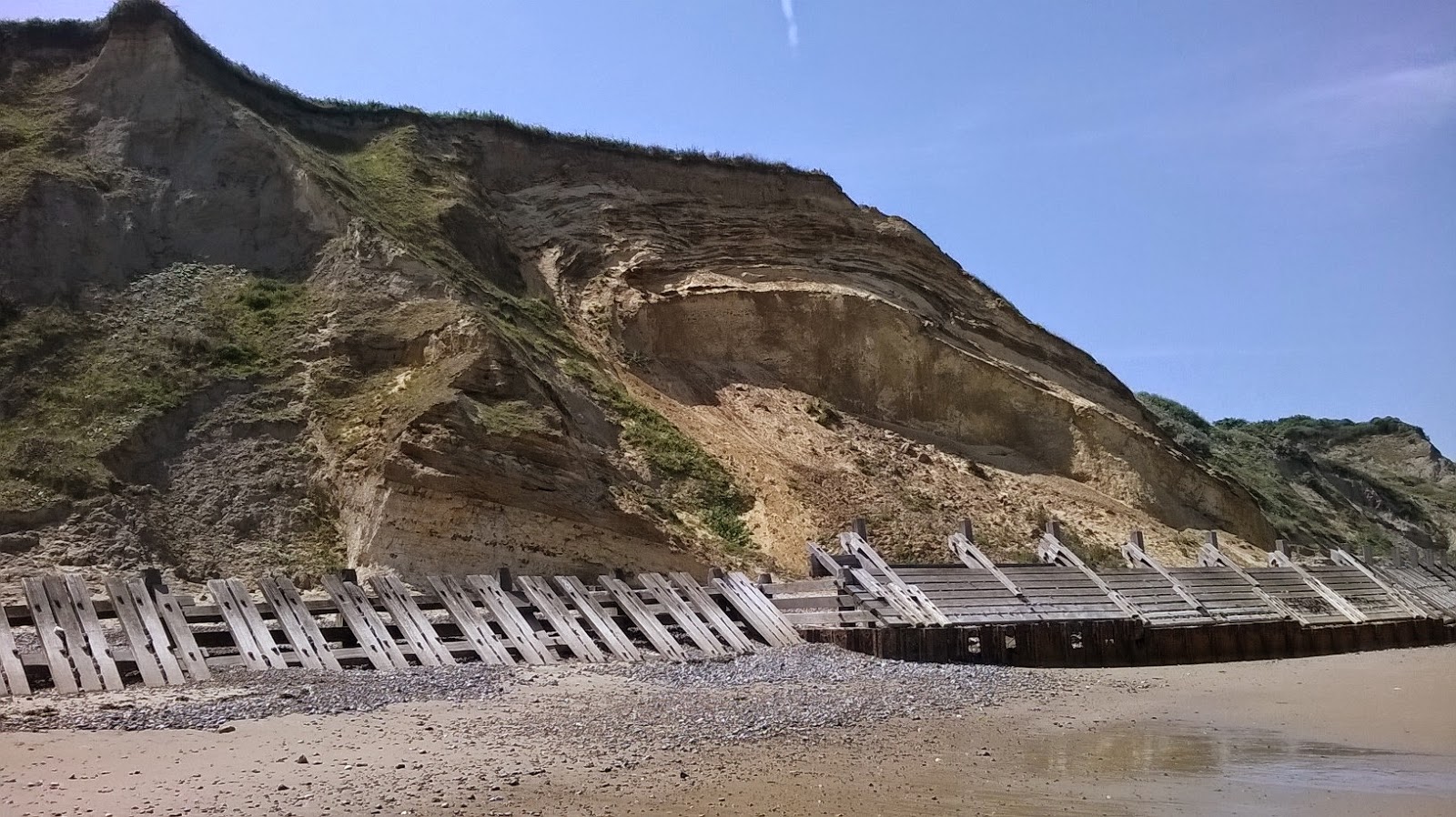 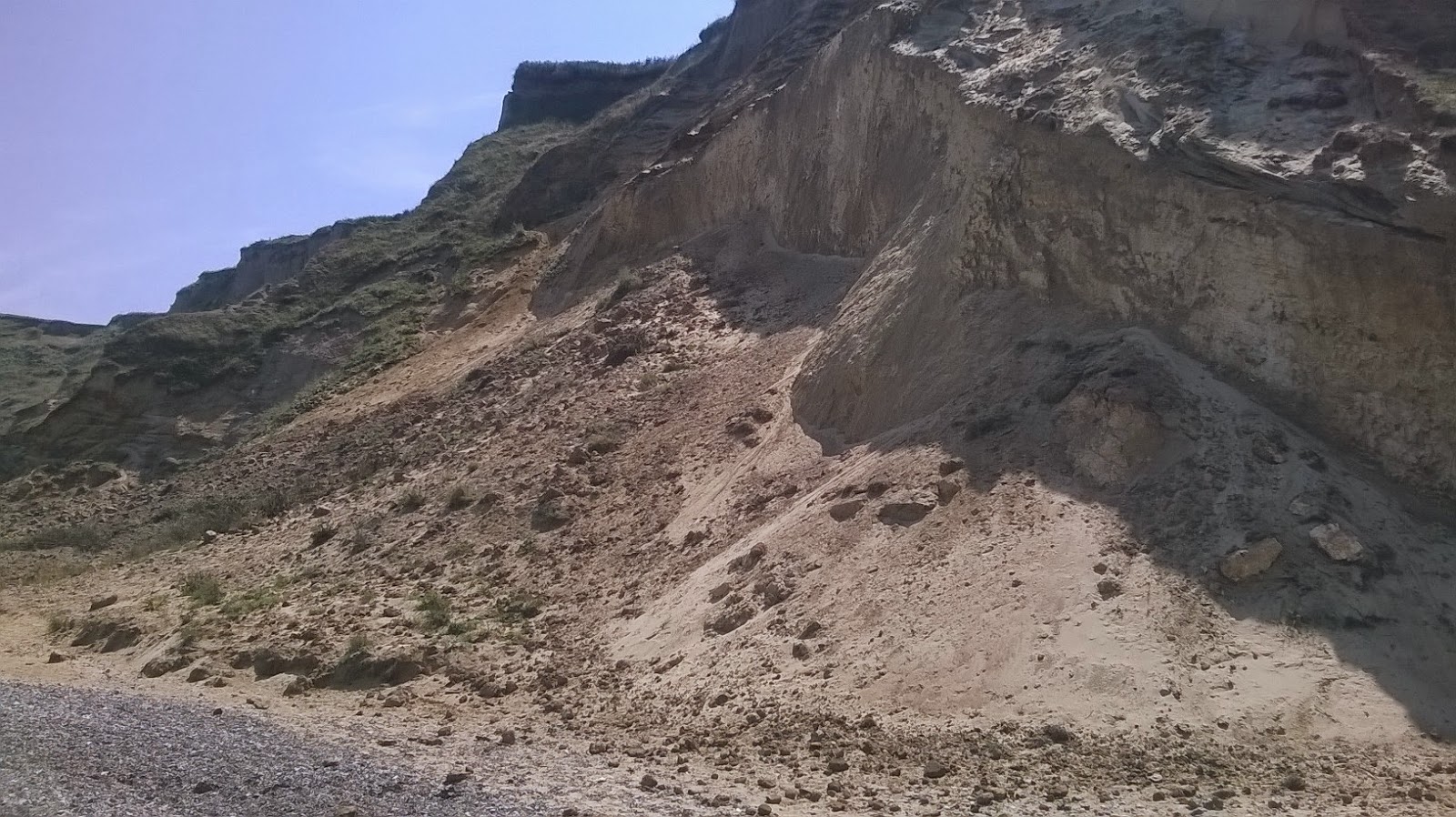 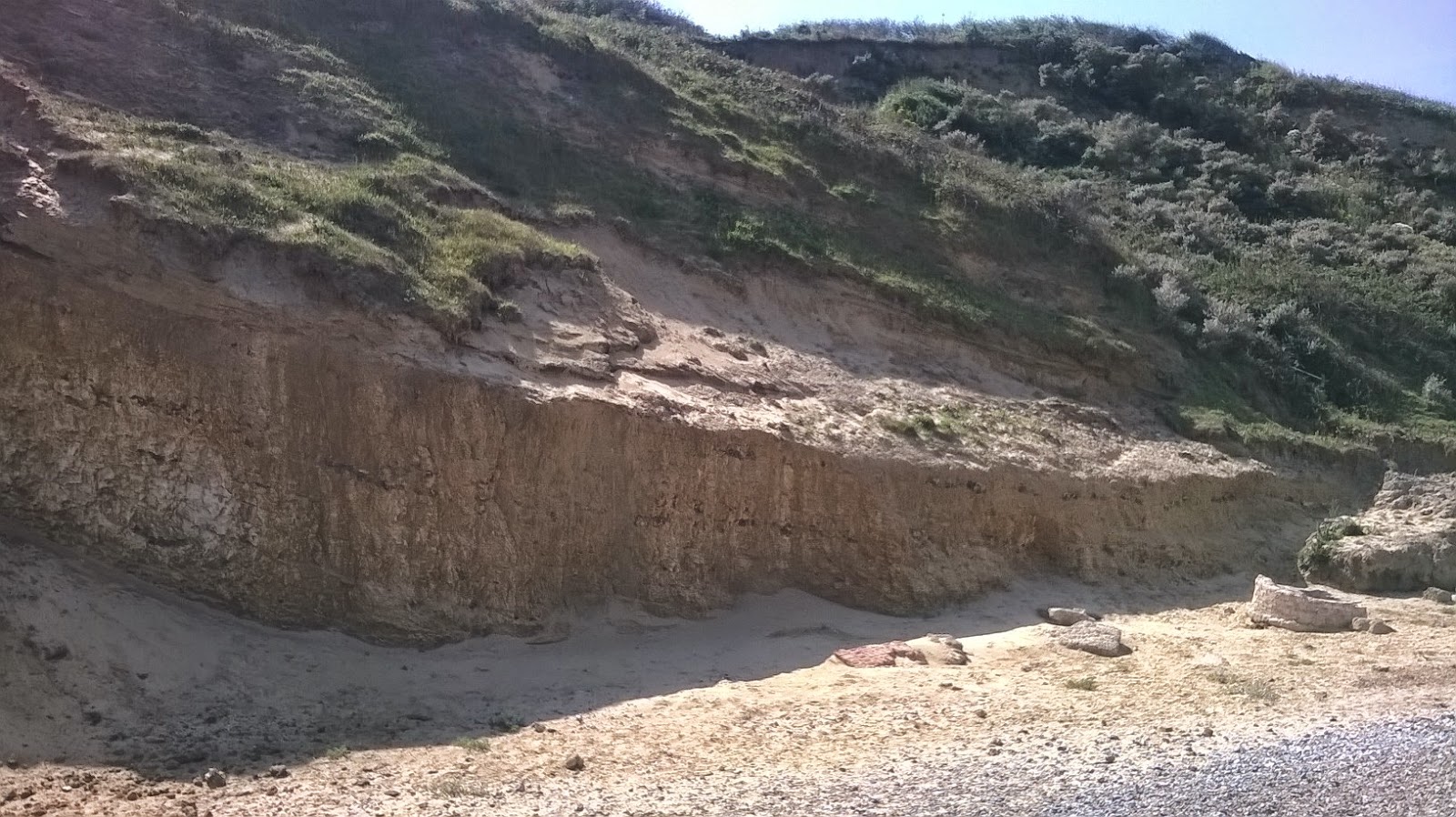 Oh, and here are a couple of photos showing the terrible surroundings and awful weather I had to put up with at the time: 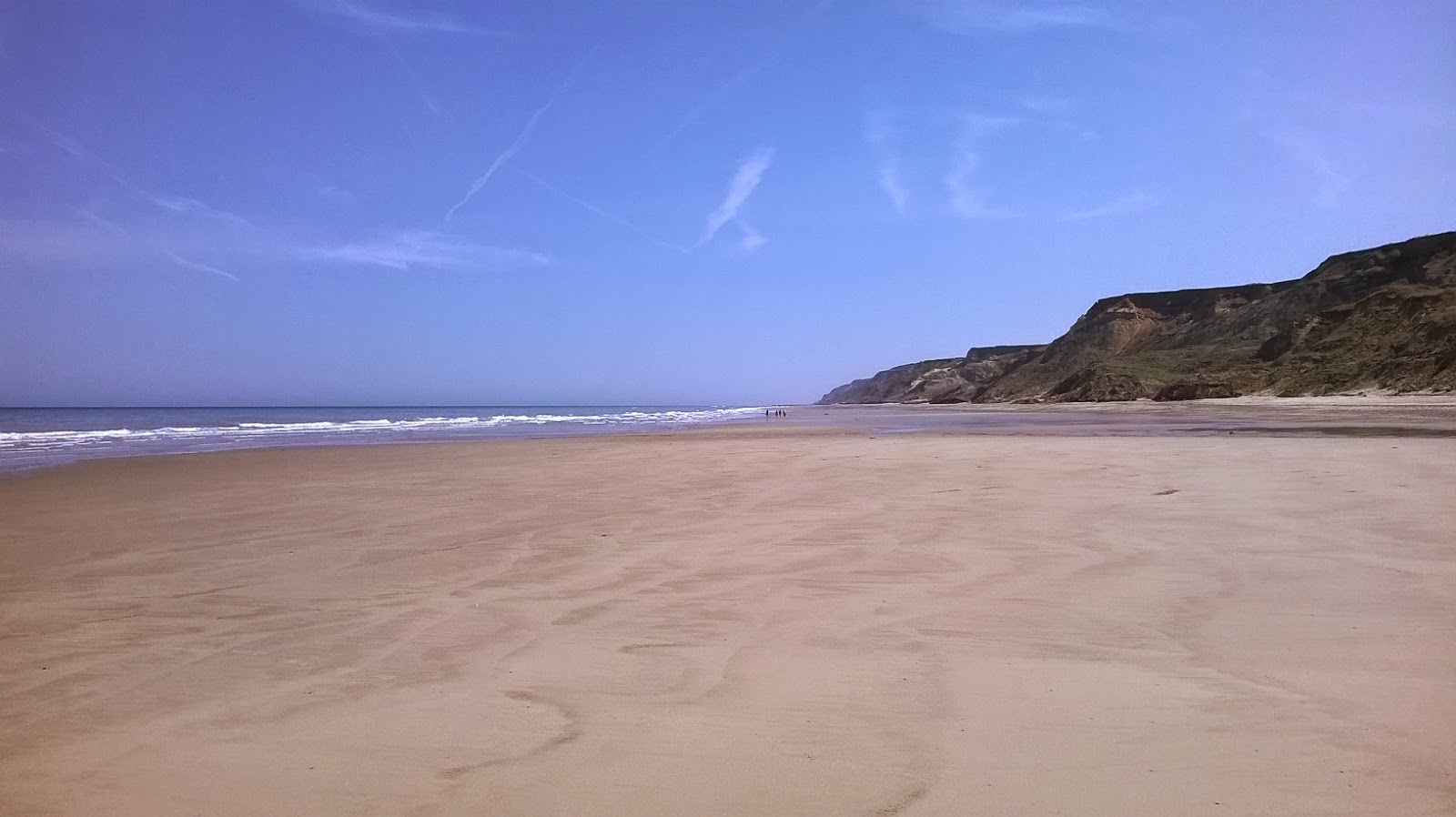 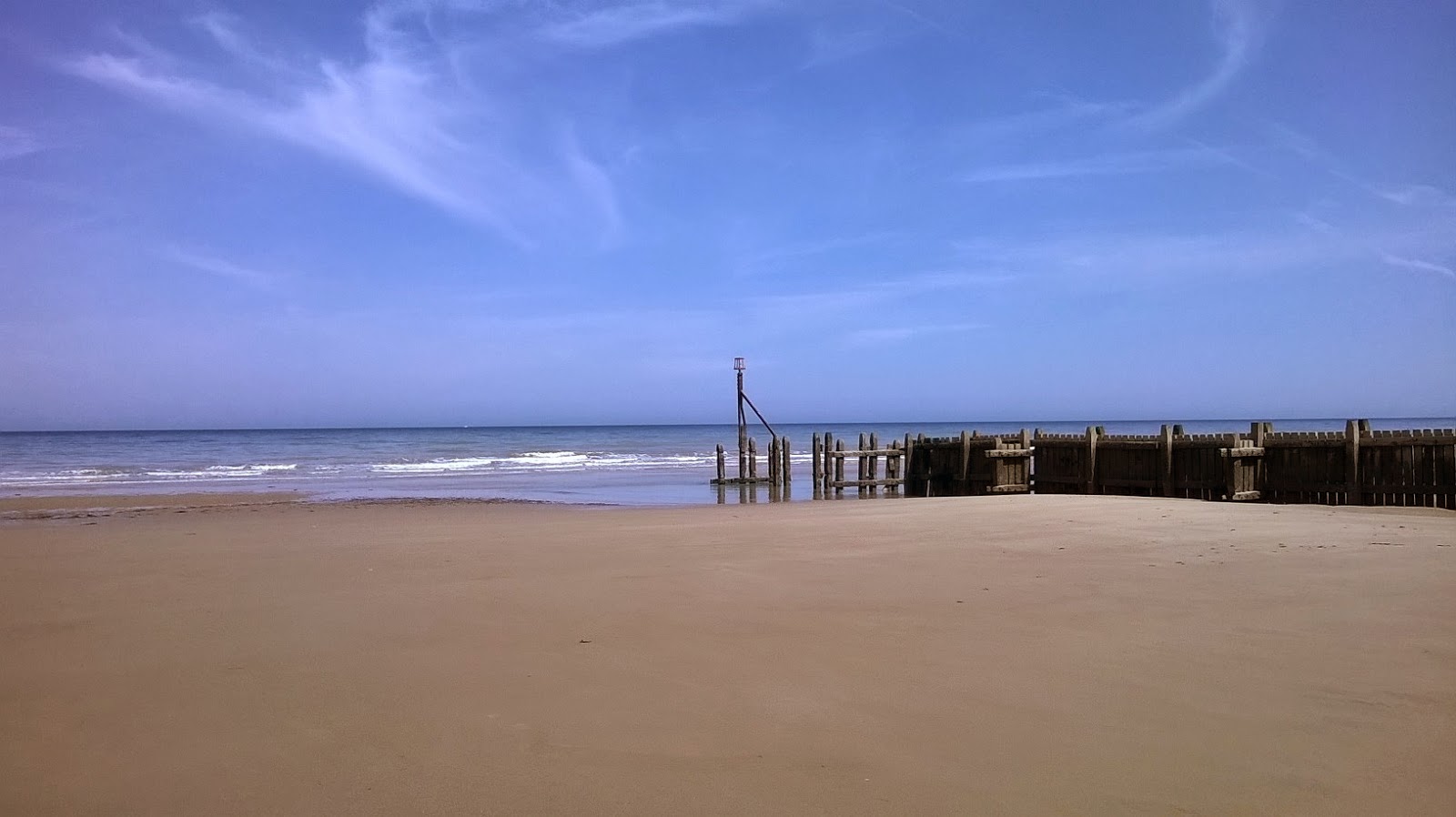 Posted by Inexplicable DeVice at 08:02 10 comments:


Sometimes it's best not to look under the bed...

This one minute horror can't wait for Hallowe'en. It's by director Ignacio F. Rodó and based on a story by Juan J. Ruiz. More details can be found at Filminute.com.

Posted by Inexplicable DeVice at 20:33 6 comments:

Widdershins around the garden


While we're waiting for MJ (that lazy baggage)* to get up off her quince** and post the Annual Garden Event photos, I though I'd post these photos of the most interesting or colouful plants starring in Castlette DeVice's lush waning gardens this Autumn.
The photos I submitted to MJ were from June when the gardens here were just about at their peak. Now that Autumn has arrived here in Blighty, the garden is looking a little worse for wear, full of lightly crisped foliage from the dry summer and dying flower heads as I haven't got around to doing any cutting back yet (then you're just as much of a lazy baggage as MJ)***. Still, a few bright sparks can be found amongst the embers, so here they are:


While the photos are displayed in order as if I went widdershins around the garden taking them (as the post title suggests), I'm not (despite popular belief) a silly witch who would go against the natural course of things. I am, however, contrary, so even though I won't tempt bad luck by actually travelling widdershins, I'm quite happy to give the impression that I did so!

* Beast?! How did you get in here?
** An affectionate term for Moom's ladybits that has got away from me slightly.
*** You again, Beast? How are you doing this? Clear off!

Posted by Inexplicable DeVice at 17:45 11 comments:

It is past pumpkin time for Cinderellas*


As I  haven't got anything else prepared at the moment (and haven't done anything of note) I thought I'd just update my reading list.

24. Get Off the Unicorn, by Anne McCaffrey
A wonderful collection of short stories including some set in the worlds of the Dragonriders of Pern, the Ship Who Sang and the Talents (see 26, below).
I haven't read this book cover-to-cover for a long time as I usually just reread my favourites: "The Smallest Dragonboy", "A Proper Santa Claus", "Finders Keeper", "The Great Canine Chorus", "Apple" and "Honeymoon". However, reading the whole thing uncovered a wider range of themes and ideas than I remembered, some surprising hard sci-fi, and also some very dated idiosyncrasies. Most of these stories were written in the '60s and '70s and sometimes the social and political notions of the time really shine through. I don't find this a particularly bad thing, it's just interesting to look back on how things were then, and how Ms McCaffrey's progressive stance for equality becomes a central concept for many of these stories.

25. Deep Space Nine short stories, by Altariel (Una McCormack)
I didn't know whether to include these or not as they're not from an actual book, but I have read loads of them - more than likely a book's worth - so here they are. They're mostly character pieces involving Garak, Dr Bashir and various others from Deep Space Nine.

26. To Ride Pegasus, by Anne McCaffrey
Other than her arguably more well known Dragonriders of Pern series, Ms McCaffrey penned a series of novels and short stories about Talents: a sub-set of humans with psionic abilities (or talents) ranging from clair voyance to teleportation (via telepathy & telekinesis, amongst others). These talents ranged from the microscopic, such as Ruth Horvath's microtelekinetic ability to adjust genes (which is how she created her blue-eyed, blonde-haired daughter from dark-haired, dark-eyed parents), to the macroscopic telempathic ability of Amalda and Bruce Vaden that enabled them to control crowds of people by manipulating their emotions.
This book covers the organisation of the fledgling talents and their rise from derided crackpots and circus acts, to a recognised minority with rights and scientifically proven abilities. As with most other minority groups, their journey is not without difficulty or loss, but with help, they succeed.

27. Point of Divergence (Star Trek: Seekers 2), by Dayton Ward & Kevin Dilmore
This novel is the direct follow-up from Second Nature (book 21 from my last book post).

28. The Well of Lost Plots, by Jasper Fforde
Thursday Next has made a tactical retreat into the Well of Lost Plots (a world of unfinished and unpublished books) to regroup after the events of Lost in a Good Book (book 20 from my last book post). She is pressed into service with Jurisfiction - the book world's equivalent of her job as a Literary Detective in her real world - and teamed up with Miss Havisham from Great Expectations. Adventures ensue...

Next: The White Dragon, by Anne McCaffrey

Posted by Inexplicable DeVice at 09:46 6 comments:

My! Haven't you grown? 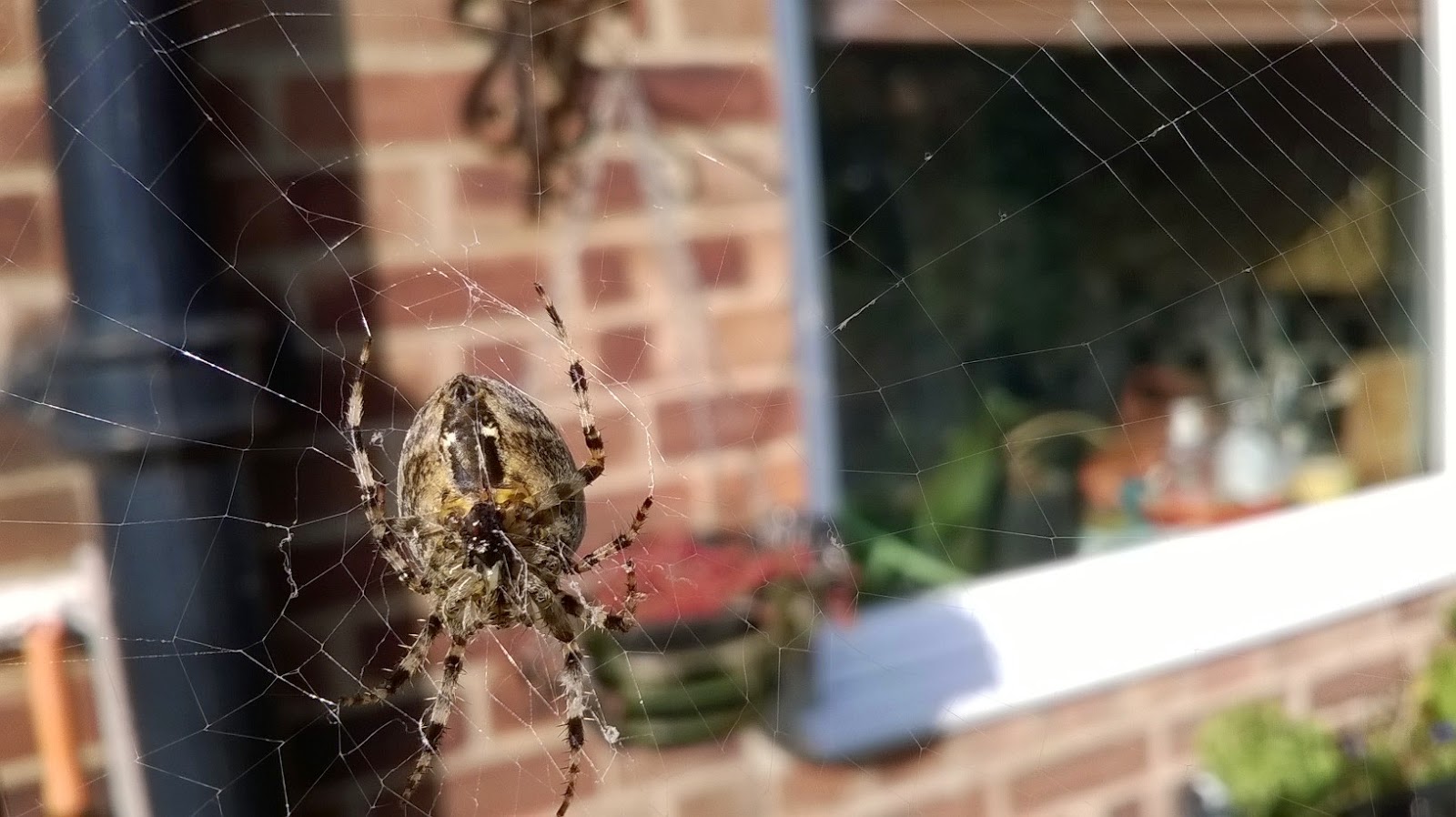 I'd almost forgotten about these little horrors until I wandered around the garden trying to decide which bits to submit to MJ's annual Garden Photos Event.

Posted by Inexplicable DeVice at 17:34 8 comments: