Despite Summer having been over for almost a month, the weather didn't get the message and continued with sunshine and warm (if not downright hot) temperatures for most of September.  There were a few days of clouds, rain and mid-teen temperatures, but they were soon boiled away.
Now, however, our Indian Summer appears to have come to an end as Autumn takes over.  Although, the forecast is still looking pretty good for the first half of October, as the temperatures are only set to drop to between 14-16°C.

Anyway, Wednesday was spent baby-sitting Count Podgekinson, which entailed two walks around the village and surrounding environs in the hope that he'd fall asleep in his push-chair.  Only the morning walk was successful in that regard.
Here are the photos from the walks:

Of Gorgeous, Beach Huts and Breakwaters 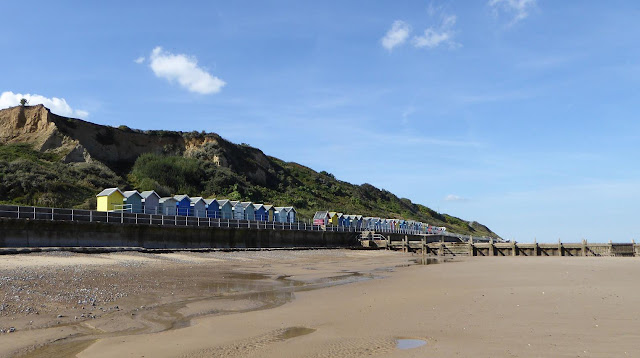 Yes, that comma in the title is supposed to be there. It would be a stretch to call the beach huts here "gorgeous" - I mean, they're not hideous, but they're quite a way from gorgeous.  Speaking of which, the Gorgeous is quite far off, as can be seen further down in this continuation from yesterday's photo post...

Labels: Holidays, I We Me Us, Norfolk

Not the Usual Suspects at the End-of-the-Line 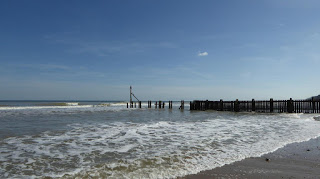 The last couple of days have been bright and sunny, so it was down to the beach for a wander.  I've split yesterday's photos up into two posts - this one, featuring Not the Usual Suspects, and a forthcoming post which is all about the beach and the other groynes. 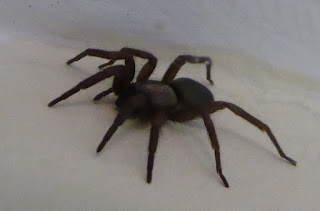 Well, another hastily smushed together post is here.
Despite having had a week off work - with another week to go - I don't seem to have accomplished very much.  I've got a Star Trek art project to do, but every time I sit down to make a start, I end up procrastinating something chronic.  Case in point: Hairy Legs on the right, there.  I caught him staring at me doing nothing from my ceiling, so I papped him. 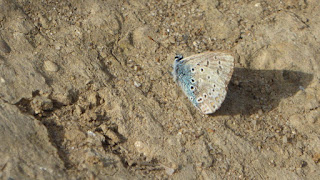 Then, on one of my wanders down on to the beach, I managed to snap this Small Blue butterfly resting in the sun.  Usually, they're so flighty that one can't get near enough for a photo, but I think this one had tired itself out.

Hit and Run: The Freakin' Green Elf Shorts are on the move!


The latest unfortunate wearer of the Freakin' Green Elf Shorts - Alpo Jones - is documenting the torture and debasement that comes with those detestable polyestables.
Here is a taster of what's in store:

You can see the full post here, with more (including a very suspect stain) here.

This post is brought to you in association with Rimpy Rimpington Inc.


Posted by Inexplicable DeVice at 20:17 6 comments:

5 out of 10 households prefer Kormorant & Tetris


What?
What?
The title.  What are you going on about?  What does it mean?
It doesn't mean anything!
Actually, it's the best I could come up with on short notice for this hastily smushed together post.
Ah.  That explains it.
Does it?  I'm still none the wiser.
So, what does it mean?
Well, my SubC was right-
Hah!
Oh, shut up.  It doesn't really mean anything. Its just an amalgamation of Mago's amusing "Kormorant and Tetris" comment (because this post contains cormorants) on my most recent It's A Faaaake! post (Mago was describing Koromandis the Chandir, and th'Thanticar the Andorian), and the second part of this post which deals with five out of the most recent ten videos I've watched according to my YouTube Library History.
What a strange combination.  What on Earth made you think these two disparate things would go together?
Nothing!  I just thought that as so many of the posts here lately have been about the same tired old subject matter (beaches, cormorants and seals)-
Because you, Witchface, can't be arsed to pull your finger out and write about Cusp-related goings-on and the like!
Rude!  You could get off your arse and go somewhere other than the bloody beach, you know.
I could, but I don't want to!  Anyway, I thought I'd try and liven up this post with something a little different, so be quiet and let me get on with it!
Hmmph.
And "Hmmph!" from me, too!

Right.  Now that those two have shut the Hells up, let's get on with this, shall we?  The following photos are from Thursday 13th September: 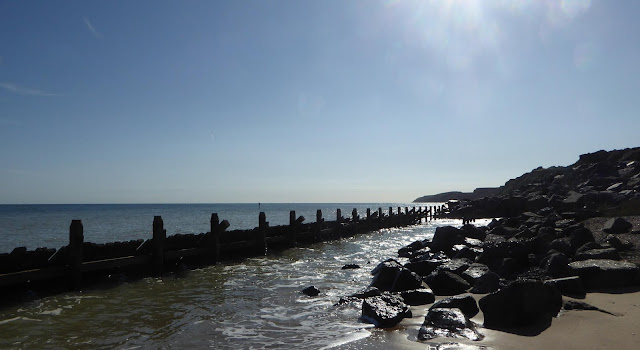 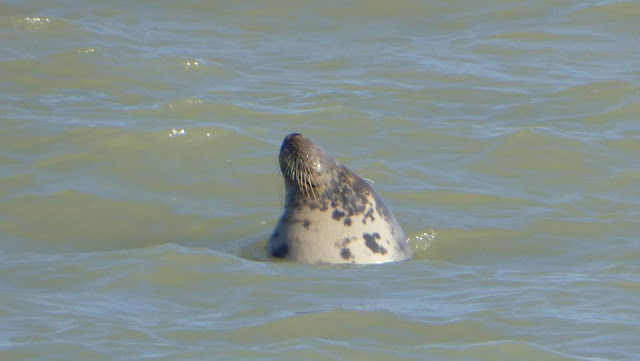 
Before we get to my bath, here's something I threatened a couple of months ago:


Book on a Chair: The Final Tour

These are the very few books I've managed to read since Anne McCaffrey's The Rowan back in January:

I thought today was an excellent time to do a book update because I also did one nine years ago exactly which features one of the books here.

And now the feature presentation:

At the Other End of the Line


Beyond the End-of-the-Line, past the Kingdom of the Crab People and the Chalk Rafts of Verstrandt, and even further on than the final stop of the NightShip, lies a realm where science is scorned, magic is an annoyance, and reality is something that happens to other people.

Yes!  Join me on yesterday's journey to the Other-End-of-the-Line!

It's A Faaaake! Not The Art Of Star Trek - Wild Things

Continued from... It's A Faaake!  Not The Art Of Star Trek - Seeing Double

Well, I didn't use any of those photos from a couple of weeks ago (was it really that long ago?) for August's Art Challenge.  This was mainly because I had to go haring around the countryside after Koromandis and th'Thanticar managed to escape to the woods and then to the chalk beds.  Despite this, somehow I managed to take loads of photos of them (they're so patient) as they plotted their next move.  And it's from those photos that I found one suitable for the art challenge.
This second batch came out much better than the first lot, so I didn't have to resort to adjusting the contrast and brightness etc.

But before we get to my challenge image, Koromandis and th'Thanticar are in danger of getting lost in the woods as they search for a way into a different environment: 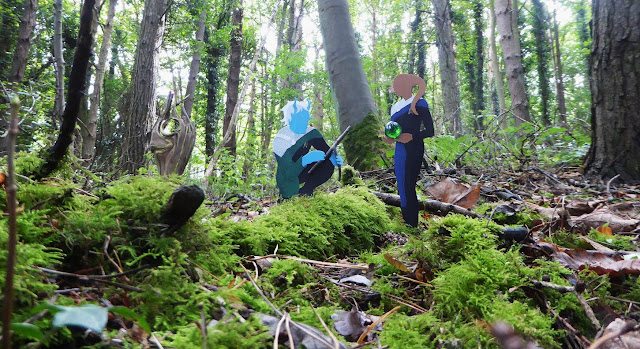 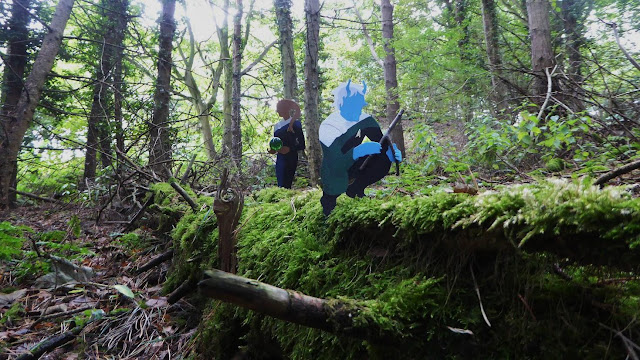 Having found their way to the chalk beds, the two Starfleet Occult Operations officers plot their escape, hoping to signal their shuttlecraft using their appropriated crystal ball and divining stick. 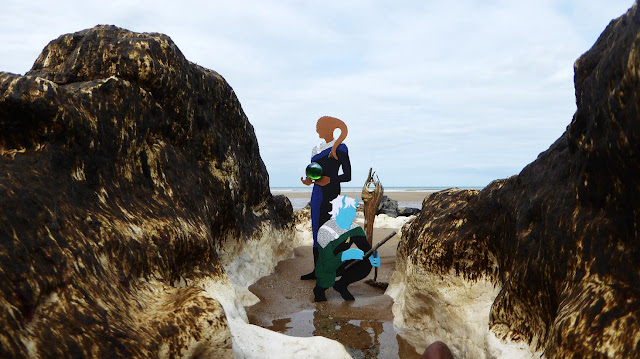 
Bad news, everybody: Despite making you suffer with two Star Trek-related posts within the last month, I have another one coming up.  So, here's a little intermission to take your mind off it.
These photos are related to the Trek posts, though, as they depict the disturbance of some familiar Familiars as I buggered about on the beach with my Andorian and Chandir subjects.