Dropped into another drone-host this morning. There're plenty of useless lum... I mean willing hosts here to utilise. Most of the population here on Sevane are more than willing to give up their bodies for a while. It means they can go and visit somewhere or someone else, while renting their own body out to an incoming tourist. A bit like time share, I suppose...

Anyway, I left the Host behind (it was his mum's 60th birthday, or something, so he couldn't come) and trans-stellar spectralised onto the station in orbit of the planet. Unfortunately, due to the popularity of Sevane as a holiday destination, I was caught in a spectral holding pattern for a couple of hours waiting for a suitable drone-host. It was while caught in the ether, that I sent the first postcard. I must admit, the postal service is excellent. It only took eight days for the card to reach the Host. Not bad considering the 244 light-year distance!

Another plus point is the e-connection. Sevane has a marvellous substar-broadband network. One of the substar-cords even reaches Earth! I think it traverses the sub-psi, but it could run through L-Space for all I know. Unfortunately, the Earth-end isn't tied down very well, so it's constantly flailing around like an epileptic at a rave. Consequeyntely, searching for a connection is a bit hit-and-miss so you may have to put up with postcards and no posts. It seems to have linked up all right this time, though.

Speaking of 'linked up', the Host has just Instant Messaged me. It seems another of my postcards has arrived.

Oh dear. It's the one after 'the night before'. Bugger! 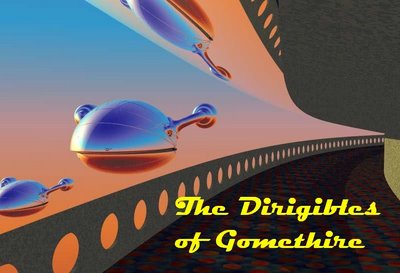 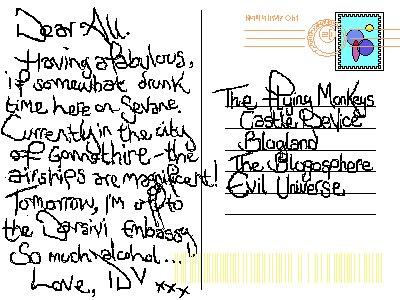 Well. That wasn't too bad. At least my spelling was ok.

Actually, there's an interesting story to this one. The picture is by one of the few humans to have been to Sevane. The director of the Gomethire Institute for Transport (I know. I know. Hence the title) liked his work so much, he commissioned a few pictures for retail purposes. I believe the artist, a Mr Bill Pragnell, has a website of some of his work here. I think I sent a postcard from the Darsivi Embassy so I expect it'll be with you shortly.

Anyway, must go - loads to see and do.

Posted by Inexplicable DeVice at 17:02 7 comments: 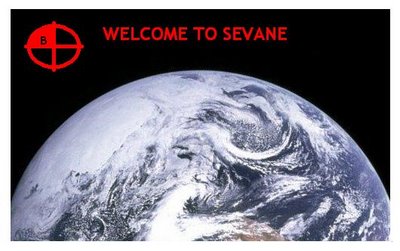 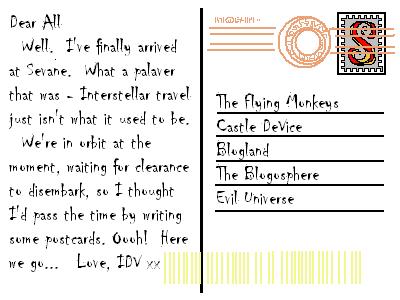 Posted by Inexplicable DeVice at 21:45 9 comments:

Oh My God! They killed Qenny!

Good God! Qenny has buggered off!

Where has he gone?

Too many Bloggers are disappearing. Is there some sort of Extinction Level Event going on that we should be aware of?
Posted by Inexplicable DeVice at 13:34 9 comments: 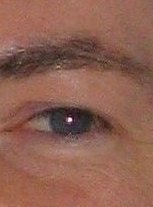 
Witchface has gone on holiday and left me (the Host) with this meme from Qenny. For which I must thank him (Qenny, not IDV), otherwise I wouldn't have anything to blog about. And now, I will subject you to my nefarious reading preferences!

1. One book you have read more than once: Good Omens - The Nice and Accurate Prophecies of Agnes Nutter, Witch (Neil Gaiman & Terry Pratchett). Funnily enough, I liked this book better before IDV arrived on the scene. The bit where Aziraphale takes up residence in Madam Tracy's body as they ride to avert the apocalypse on Madam Tracy's elderly scooter (complete with Witch Finder Sergeant Shadwell on board), is now quite poignant...

2. One book you would want on a desert island: The Big Book of Desserts? 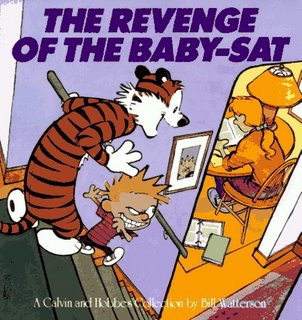 3. One book that made you laugh: Calvin & Hobbes - The Revenge of the Baby-Sat (Bill Watterson). Calvin & Hobbes always make me laugh. I only chose this particular book because I like the front cover better than the others. Well, I like the expression on Calvin's face.

4. One book that made you cry: Watership Down (Richard Adams). Somewhat obviously, the bit where Hazel dies. There was another book that I read quite recently that had me sobbing and snivelling but I can't for the life of me remember what it was. How diabolical.


5. One book you wish you had written: The Time Traveller's Wife (Audrey Niffenegger). This book is just beyond compare. Truly magnificent in its extraordinary ordinary-ness. I would try to convey more, maybe use some more synonyms but I appear to have lost my perspicacity. IDV must have taken it by mistake. Just a warning, though: If you're going to read the book, don't read the link - you'll spoil the ending. In fact, the whole book will be ruined.


6. One book you wish had never been written: I'm going to have to steal Qenny's answer and go with all those religious tomes that cause blinkered righteousness, hatred and war. Well, either those or Gillian McKeith's You Are What You Eat. Cow! 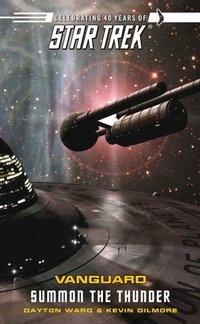 7. One book you are currently reading: Star Trek Vanguard - Summon The Thunder (Dayton Ward & Kevin Dilmore). I've only just started this one but, so far, Memory Alpha's description of it is spot on. I thoroughly enjoyed the first in the series, Harbinger, so my hopes are high.


8. One book you have been meaning to read: The Curious Incident of the Dog in the Night-Time (Mark Haddon). This book has been beside my bed for months now, if not a year. I borrowed it from a friend who raved about it, but I just haven't got around to starting it. I always seem to have something else to read. Or accidently buy a new book...


9. One Book That Changed Your Life: The Necrotelicomnicom. It was the book I was reading when IDV dropped in - I think it acted as a beacon or conduit. It has a lot to answer for!

Posted by Inexplicable DeVice at 17:39 21 comments:

For anyone who pilots some sort of vehicle, be it motorbike, car or broomstick, I urge you to click here: http://www.ipetitions.com/petition/nospeedcontrol/ and sign the petition to say 'Good Heavens, No!' to having a black box style monitoring and control device fitted to your private mode of transport. It's not just motorbikes that will be affected - it's all road users, even pedestrians (and those that - horror of horrors - use public transport).

Do you really want the government knowing where you're going, how fast you're going and having the power to limit your speed via remote control? Do you? Besides, it's not safe to have someone driving your vehicle when they're not even in it.

Thank you Convict for bringing this to my attention.

One had one's hair cut this afternoon. Not in itself an unusual thing. In fact, if you're looking for unusual, you'd better look elsewhere today. For today is all about usual.

For instance: My appointment was at 3:00pm but the earliest I can leave work is also 3:00pm. Luckily, the barbershop is just around the corner from work - about two minutes brisk walk. As usual, whenever I want or need to leave work at a specific time, something always comes up at the last moment. Today was no different. At 2:45pm I received a visitor from the telephone section (callcentre) with a query that I just knew would involve a time consuming question & answer session followed by a lengthy investigation, liaison with two other sections, at least one follow up call to the customer, and finally, arranging a 'resolution'. At best, it would all be over with by 4:00pm. Not ideal. I considered sending a software demon (Hell is quite technologically advanced these days, you know) down the phone line to 'create a diversion', but the summoning & download time precluded that, so I ended up sending the visitor away with a list of questions to ask the customer, hoping that by the time the answers were obtained, I'd be long gone. Which I was!

As usual, I'd received a gift today on the side of my forehead. Its placement could not have been more perfect, for with every stroke of the comb while my hair was being cut, the edge of the comb gouged into it. I squirmed in the chair, hoping that it wouldn't bleed or pop, covering all and sundry, becoming The Incident that would prevent me from ever showing my face in there again. Assuming I'd have any face left, that is. However, aside from becoming red and angered, it simmered gently allowing me to return another day.

Just as my barber was finishing off, his next client walked in. The ex of my best friend. Bugger. Now, this may not seem usual but I've been seeing him around a lot lately. In the car park next to work. In his car as I'm crossing the road. Walking down the street as I walk the other way. I could feel my autopolite kick in as I watched him in the mirror passing behind me to the sofa and magazines. Just as 'Hi' was about to leave my lips, I managed to switch the damned thing off and say nothing. Afterall, he didn't acknowledge me, even though he must have seen me. As I got up to pay, he studied a newspaper industriously, not looking up for a second. Good. I was saved the wrath of my friend when she found out that I'd dared to speak to him.

As I was walking home, I noticed an odd shaped young man crossing the road in front of me. I studied him from behind as I followed him towards the station. He was short - five foot six at the most - with large, weird angled arms and shoulders almost as broad as he was tall. Then he turned slightly and I saw the reason why: He obviously lives in a gym. His muscles were absolutely enormous! He was like a mini-Hulk! His arms looked weird from behind because they obviously weren't long enough for his massive biceps and triceps. As he turned a bit more, I caught sight of his face. Awwwwwwwwwwwww... He was soooo cute! And young. 23 tops. As usual I fancied someone inappropriate: Too short, too young and a gym weirdo. Probably straight, too, as the gaydar didn't even flicker. How can this be? I like the older, taller, normally fit men. Don't I?

Then, once at home and a quick poke about revealed nothing in the least appetising, I made a quick trip to Sainsbury's as usual to find something nice for dinner. And, as usual, I found pizza and wine. And now I sit here blogging as usual*, waiting for the pizza to cook and the wine to chill.

I think the pizza's done...


* OK. So my blogging has become a bit sporadic of late so this isn't entirely usual.
Posted by Inexplicable DeVice at 18:31 7 comments:

Why can't I think of anything to blog about?