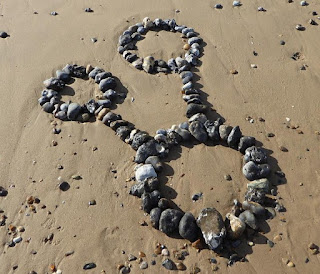 What with one thing and another lately, I haven't posted any beach photos for a couple of weeks.  This means they're building up and approaching critical mass.  Luckily, the weather is on the turn, meaning no more hot (or at least warm), sunny days, so I won't be going down on the beach with Camera as often as I did.
So, to catch up somewhat, here are a few days worth of photos, starting with dawn from the 21st (one of which made it into Dinahmow's calendar in the previous post): 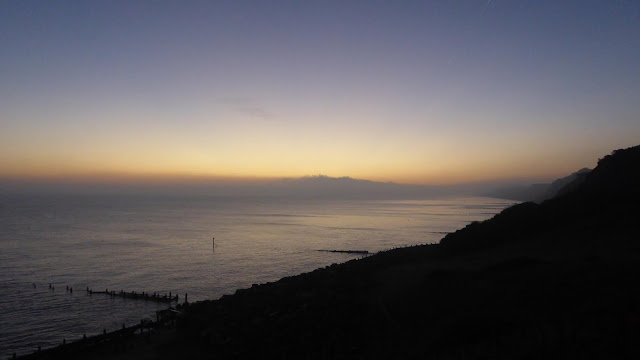 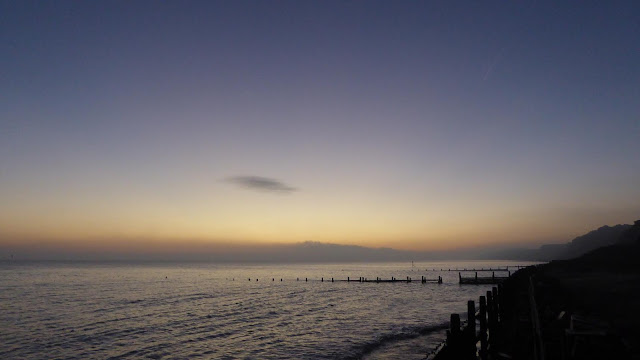 
What to get?  What to get??
Never mind "what to get", how long have we got to get whatever we might be getting?
How long?  I don't know?  How long does it take for something to be mailed to Australia?  Because however long is left, we'll have to take off the postal service time.
Well, when's it got to be in Australia for?
The twenty-third.
Of November?  So we've got about a month, then.
No! October!  The twenty-third of October!
Hang on...  What's the date today?
I don't know? Let me look at the calendar... 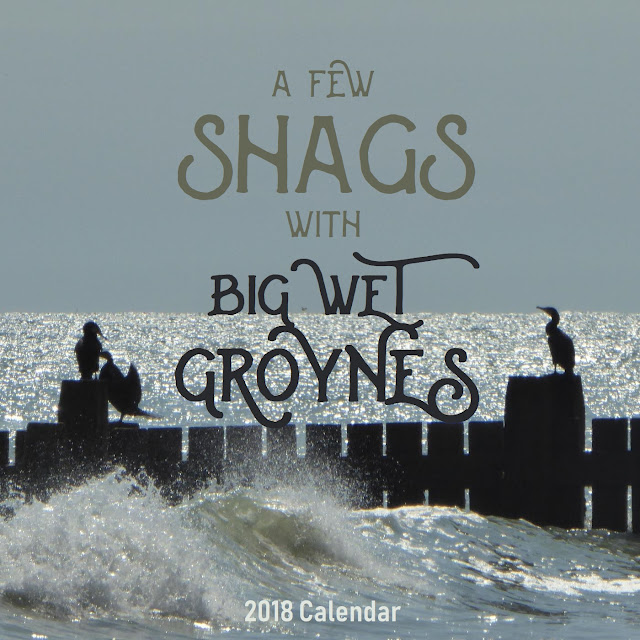 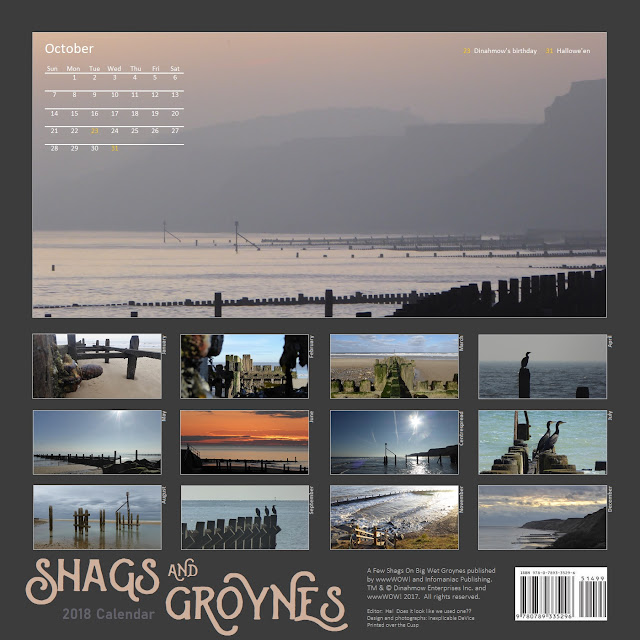 Shit!  It's today!
Of course it is...
Happy birthday, Dinahmow!
Yes, many happy returns!  We hope you're having a fab day.

"Tear My Head Out From The Sound"


Last Saturday was National Album Day which was brought to my attention by Jon (of course).  Now, almost a week on, and following Jon's Top Ten, I bring you my own top ten albums.
This was a difficult and somewhat harrowing choice to make, whittling down square plastic cases containing delightful discs of divine ditties.  I flicked through my shelves of Air and Alcazar, The Divine Comedy and Dannii Minogue, Girls Aloud and Goldfrapp, Kylie and Kula Shaker, Robyn and Röyksopp, Shakespears Sister and Steps - following Jon's rules: No "Various Artists" compilations, no "Greatest Hits", no soundtracks, reminding myself that I was choosing my favourite albums, not necessarily my favourite artists.
Eventually, I settled on my final selection. But before I get to them, here are the "almosts": Moon Safari by Air, Meccano Mind by Syntax, Sun Structures by Temples, Buzz by Steps, I Say I Say I Say by Erasure, All Possible Futures by Miami Horror, Wanderlust by Sophie Ellis-Bextor, and Seventh Tree by Goldfrapp.
Now, counting down from ten to one (the order of which is subject to change depending on my whim), here are my top ten albums:

#10 : Kylie's Light Years (2000)
Light Years made Jon's list too, as did the video for the absolutely fabulous "Your Disco Needs You", so I've chosen a different version:

Labels: Blogorati, I We Me Us, Meme


Fashion disasters come and go, but none are quite as catastrophic as being caught wearing the Freakin' Green Elf Shorts in public. Sadly, poor AlpoJones - latest winner of the vile velour - realised this too late, and tried to end it all by flinging herself under a passing car. 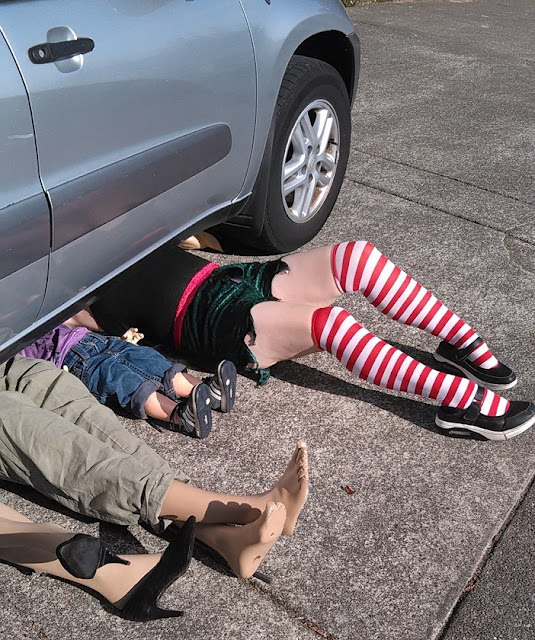 Unfortunately, three other fashion victims had got there before her, bringing the car to a halt before any damage could be done.  In a fate worse than death, AlpoJones has been caught alive in the 'Shorts (and, quite possibly, a pair of the Very Mistress's stripy tights).
We appeal to your humanity (or inhumanity - whichever works), and ask that you leave a witty, pithy, or just plain bonkers caption in an attempt to lure the vile velour Freakin' Green Elf Shorts away from AlpoJones' shapely thighs and onto your own undulating undercarriages (we know some of you are desperately craving a(nother) polyester binge).

Please give your captions generously for this worthy cause.  Caption contributions can be made here (at AlpoJones' tumblr post), or here (at Rimpy Rimpington's blog post for those without tumblr know-how - like me).  The appeal will close just before midnight at Hallowe'en.

As before, this FGES Public Service Announcement has been brought to you in association with Rimpy Rimpington Inc, with generous assistance from Infomaniac Enterprises. 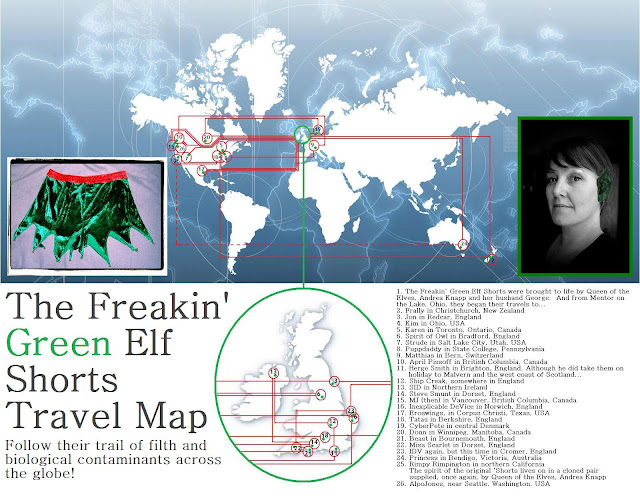 Posted by Inexplicable DeVice at 21:12 15 comments:

Crazylegs Cranes (and other unusual suspects at Pensthorpe) 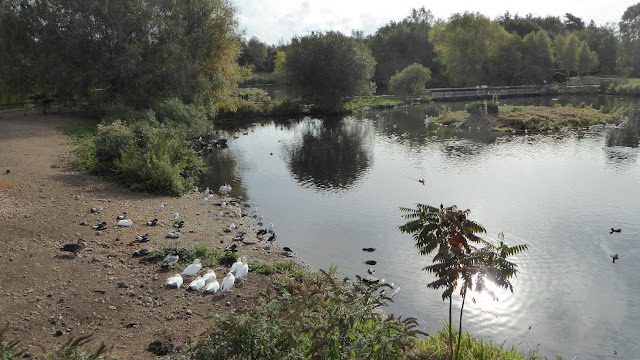 Last weekend, Inexcuseable and her husband dragged Count Podgekinson and I off to Pensthorpe Natural Park near Fakenham.  We saw some birds and crap...

Landscapes Beyond the End-of-the-Line


Beyond the End-of-the-Line, as I'm sure you're aware by now, lies a Cusp interface through which one may access quite a variety of lands.  The Kingdom of the Crab People, the Chalk Rafts of Verstrandt, the last NightShip stop, to name but a few.
Unfortunately, Thursday's jaunt past the End-of-the-Line led only to the sticky, yet slippery (but quite dramatic) clay strata of Sidestrand…
First though is a visitor to Château DeVice's bird shit festooned garden, and a couple of photos from a very rough Monday morning: 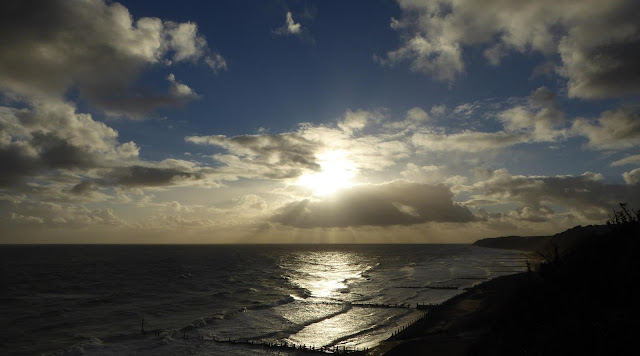 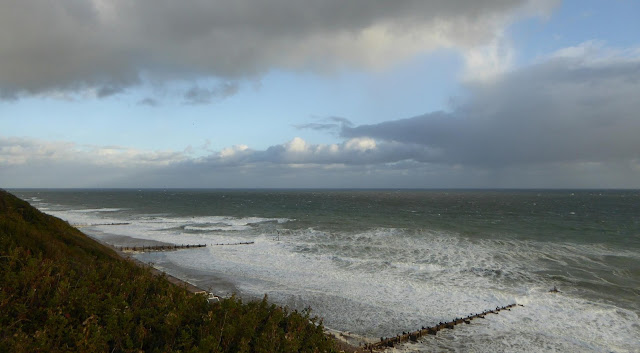 The following photos are from Thursday morning:

It's A Faaaake! Not The Art Of Star Trek - Two Soups

"My God..." he whispered.  "What is that?"
"That," April breathed, "is a starship."
Perhaps it was the way he said it.  With all the awe and respect a human being could utter.  Staaarship.

You know what we haven't had in a while? Starships.
For September's Art Challenge, I thought we could return to what every Trek fan loves doing: drawing/designing starships. These majestic interstellar beauties should be magnificent, graceful, powerful, and instil a sense of awe and wonder. I'd like you to come up with your own unique design, be it a drawing, model (physical or a collection of photons in your computer), painting etc. Or, produce an image of an existing class, or model you've already made, but shown from an unusual, but flattering angle, or set in surroundings or lighting that really show it off.
Think of the Enterprise leaving spacedock in The Motion Picture; the launch of the Enterprise-B in Generations; the first appearance of the Vulcan ship Ti'Mur in Ent: "Breaking the Ice"; or the Galaxy bearing down on the Cardassian weapon platforms in DS9: "Tears of the Prophets".

So, that was the challenge I set at the beginning of September.  I didn't have a clue what I was going to do as, while I enjoy doodling and sketching starships, turning them into a finished piece of art is another thing entirely.
I chose this theme mainly because many of the TrekBBS Art Forum posters create photo-realistic starships (interiors and exteriors) by manipulating zeros and ones in mind-boggling computer programs, but don't often enter the art challenges.  I think part of the reason may be that they're already working on their own CGI starships, which doesn't leave much time to work on something separate which is not always conducive to including the aforementioned starships.  So, I had hoped that this might entice some of them to join in.  And it worked.  Kind of.
Seven people created pieces of art for this challenge, compared to only two for August's A Trek on the Wild Side theme (the entry other than mine featured a Starfleet shuttlecraft), five for July's Unseen Scenes (one entry included starships), and four for May's Starfleet Needs You! (no starships).  There were seven entries for June's Isik For Your Thoughts though, but none of them included starships - it was all about the money (an isik is a unit of currency in Star Trek)!

Anyway, I started thinking about the Enterprise-B (on the left, there), and wondered if I could create something in that vein.  A sleek, powerful starship, but with unusual details, perhaps?  Something ornate or intricate, or in a non-traditional colour/finish?


Strictly Come Dancing is back on Saturday and Sunday nights, and with it comes the friendly and funny Strictly: It Takes Two on weekdays. 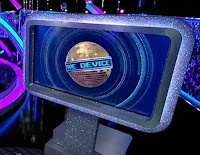 Imagine my surprise, however, when I discovered that Zoe and the ITT gang have enlisted the assistance of a distant cousin (from a future history that I hope never comes to pass), Interactive Device.  They've got the silly sod posing as their artificial intelligence, S. I. D.*
Look!  There he is on the right pretending to be the Strictly Interactive Device!

Anyway, enough about him.  This post is really just an excuse to feature the always entertaining - and extremely handsome - Aljaž Skorjanec again!
Here he is in all his cheeky glory (with celebrity dance partner, Kate Silverton):