"How to Use Venetian Blinds as Weapons"

I'm not going to go into too much (if any) detail about the books, and films/TV, and music I've read, watched and listened to this past quarter as, quite frankly, I don't have much time.  Besides, much of it you've seen me witter on about before as I have found myself re-reading, re-watching, and re-listening to things I know I enjoy and that are comforting.  (In the "Re-" sections, I've linked to previous posts in which they've featured, or at least been mentioned)

∘ TNG: Shadows Have Offended, by Cassandra Rose Clarke - A Star Trek: The Next Generation novel set in the seventh & final season of the show "starring" Counsellor Troi, Lieutenant Worf and Dr. Crusher, with a wonderful turn by Troi's overbearing mother, Ambassador Lwaxana Troi.
This novel read like an extended TV episode to me, but that's of no detriment in my eyes as I expected as much seeing as this story is set within the series timeline.  Troi and Worf take the Enterprise to investigate the theft of some Betazoid artifacts while Captain Picard and Lwaxana remain on Betazed to "manage" the distraught Betazoid House Leaders (who are one-dimensional hand-wringers with barely an ounce of sense between them!).  Meanwhile, on another planet, Crusher, Data and Riker deal with some strange goings-on at a Starfleet science team's research site.
Overall, this was a perfectly competant addition to Trek Lit, but one thing managed to push SHO over the line and into an "above average" rating from me: the description - and resulting mind image - of Worf clad only in dark leather pants, boots, and a cape.  Cwwwwoooooorrrrrrr! (think Kenneth Connor in the Carry On films)

∘ A Psalm for the Wild-Built, by Becky Chambers - The first book in a new series from one of my very favourite authors.  This story of a travelling tea monk who meets a robot out in the wilderness (the first person to see a robot in about 200 years) does not disappoint.  It is charming, thoughtful and comforting - just as I'd expect.

∘ The Color Out of Space - What a gods-awful pile of nonsensical rubbish.  I'm all for weird, but not Nicholas Cage weird, thankyouverymuch.

∘ Tales from the Loop - Now this is a weird that I do like!  An anthology of stories linked together by their characters.  A girl who can stop time, a threeway bodyswap between two boys and a robot, a timeloop girl, a man who crosses to an alternate universe where his alternate self has the man of his dreams, the "desert island" robot...   slightly melancholy characters living in a town littered with discarded machinery that changes their lives.  And there are no real "villains" which gets an extra mark from me. 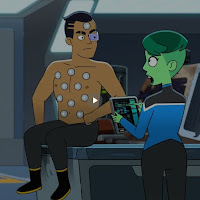 ∘ Star Trek: Lower Decks (season 2, eps 1 to 7) - Truly delightful and joyous, particularly from the mid-point of the season onwards, although it's not over yet as episodes 8 to 10 are still to come.

∘ The Boys In The Band - the film based on the 1968 play by Mart Crowley.  A tad theatrical for my liking (but then this was originally performed in the theatre...).

∘ Extinction - Meh, it was okay.

∘ Bloodbath at the House of Death - A parody of various horror films which stars Kenny Everett!  In fact, he was the only reason I watched this film.  Well, other than the multitudes of "Christ!" being uttered by various characters when frustrated...
An observation: When the characters were travelling to the "House of Death", I thought the film must have been sponsored by Renault, as Kenny and Pamela Stephenson arrived in a Renault 20 (or 30), Cleo Rocos & John Stephen Hill in a lovely blue Fuego, Gareth Hunt & Don Warrington in a 5 (Le Car, for the Americans), and there was a Renault 9 parked at the pub (alongside a rather nice Opel Monza).  Unfortunately I couldn't make out what car Sheila Steafel & John Fortune were in.

∘ *Batteries Not Included  ∘  The Philadelphia Experiment  ∘  Godzilla: King of the Monsters  ∘  My Neighbour Totoro  ∘  Extra Ordinary  ∘  Phwooooarrr!  I mean Thor: The Dark World  ∘  Serenity  ∘  Paul  ∘  Space Sweepers  ∘  Futurama (S1 & 2)  ∘  Farscape (S1, 2 & a bit of 3 - I had to take a break because Crichton's sheer twattery was getting on my nerves.  What a cock.)  ∘  I Am Not Okay With This  ∘  The Dark Crystal: Age of Resistance ∘ Cidade Invisível (Invisible City)

∘ "Take Me For A Ride" Steps

∘ "Paul's Dream" from the Dune soundtrack, by Hans Zimmer (but only the first half, though)

As you may recall, the above four numbers were featured in August's Tunes on Tuesday!

∘ "Cruel Intentions" BabyAngel69  ∘  "Rain Down Love" Freemasons feat. Siedah Garrett (rather than just listen to this, I watch the video over and over again too - I find it hypnotic.  Plus, the blonde showgirl who the camera focuses on more than the others reminds me of Claire from Modern Family)  ∘  "I Think I Love You" and "Monsters and Angels" Voice of the Beehive  ∘  "Hands Clean" Alanis Morissette

Posted by Inexplicable DeVice at 20:04

Labels: Books, Crush, I We Me Us, Music, Swearing, wwwWOW!