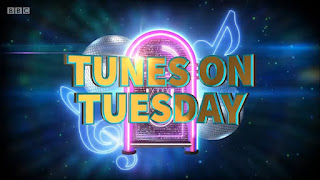 I have found some new music without having to rely on Jon's efforts to keep me up-to-date!  Well, sort of...

This assortment has been painstakingly handpicked from a select pot-pourri of TV shows, websites, and blogs (i.e. Jon's!).


The haunting and beautiful "Sangue Latino" comes from my recent rewatch of Cidade Invisível (Invisible City) on Netflix.  It's actually sung by Mariana Froes, and there's an extended version (without the actors doing their acting thing pre-and-post performance).  Although, by "extended" I mean it's played twice.

This Dune preview track I discovered at Tor.com.  I probably won't see the film as I'm sure it can't hold a candle to David Lynch's 1984 version.

"I Hope You're Happy" by Blue October came from the "What are you listening to?" thread at a certain Star Trek forum that I frequent (the one for which I do all those Trek Art things).  It reminds me somewhat of a song that would play in a slightly edgy rom-com, perhaps when the protagonist and the object of their affection part ways mid-way through the film, before making a triumphant reconcilliation!  Maybe.

"The Killing Moon" is from "I'm Not Okay With This" - another Netflix rewatch.

While certainly not new, this remastered edition of "Wichita Lineman" by Glen Campbell is new to me.  I think it was mentioned at Jon's sometime reasonably recently.

"Chaeri" by Magdalena Bay is another find from the Trek forum.  I only listened to it because I was curious about its description of being "vaporwave" music (whatever that is?!?), or somesuch.  Anyway, I love it!

And, finally, a little bit of Sophie Ellis-Bextor, as it's been a while.

Posted by Inexplicable DeVice at 18:11