Continued from... Star Trek: Voyages That Never Were V

Remember these Star Trek: Voyages That Never Were posts?
No, really. Do you remember them?
Well, I'm not surprised if you don't because it has been over two and a half years since the last one (as linked to up there). Although, I did publish a related post last year: Not The Emperor's New Clothes.
Anyway, I was having a look through these old posts recently as I've found a few more bits and bobs that, in the absence of anything else to post about (and because of Herr Mago's questions about Star Trek & Star Wars in the comments of the previous post), I thought I'd share here. There's not much that's new, but it relates to the very first Voyages That Never Were post back in 2011. Specifically, the following picture and text: 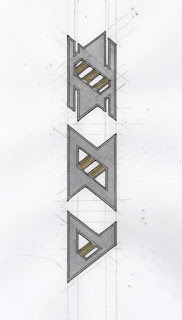 These are refined and/or reworked alternate or future versions of Federation Starfleet rank insignia as seen above.

On the brown paper, from top to bottom, are insignia for Captain, Commander, Lieutenant, and Ensign. For Lieutenant Commander and Lieutenant junior grade just remove one of the gold bars from each of the senior ranks.
On the white paper are slightly modified Lieutenant and Commander insignias, plus a new—and frankly hideous—Captain insignia. I don't know what I was thinking?


And as for that timeline of events mentioned in the original post, here it is:

What if Transwarp had worked?

2285: Testing of the transwarp shuttle Infinity was successful - the shuttle didn't explode and its pilot, the joined Trill Torias Dax, didn't die.
2286: The USS Excelsior became the first Federation starship with transwarp drive.
2287: The success of the Excelsior-class meant that the United Federation of Planets expanded rapidly, reaching far into the Alpha and Beta quadrants.
2293: An alliance was made with the Klingons at Khitomer following the destruction of their moon Praxis (as per the original timeline).
2311: The Tomed Incident never occurred, instead the Romulan Star Empire started a war with the Federation. However, it was shortlived as Romulus soon fell before the might of the Federation.
2324: Most of the various Romulan states joined the Federation.
2327: The first Federation starship encountered the Borg deep in Beta Quadrant and was assimilated.
2333: A Borg cube entered Federation space and assimilated three starships and a Federation colony before it was destroyed by Starfleet.
2339: An armada of Borg invaded and assimilated the core worlds of the Federation, including Earth, Vulcan, Tellar, Sigma Draconis IV & VI, Altair IV & VI, and Vega Colony.
2347: A Romulan science team neutralised the Borg with a bio-electric virus. The Federation is reborn with Andor, Betazed and Romulus as the dominant powers. Mars becomes the capital planet in the Sol system after Earth's decimation.
2349: Daughter of the Fifth House of Betazed, and Betazed's Prime Minister, Lwaxana, marries Romulan Proconsul Strozir. Fleet Admiral Nyota Uhura becomes Starfleet Commander in Chief.
2353: Another Borg Armada penetrates Federation space but is totally obliterated by Starfleet and the Klingon Defense Force.
2354: A Starfleet/Klingon task force travels to the Delta Quadrant to neutralise the Borg. Out of 204 starships, only 13 survive, including USS Sirius, USS Ganymede, and USS Charybdis.
2364: The bluegill parasites infiltrate Starfleet (as per the original timeline) and succeed in destroying the planet Trillius Prime. Only a few thousand Trill remain and only 27 symbionts, including Perzis Dax, Elista Cyl, Bethan Roa and Dayjia Teer.
2369: The Cardassian Occupation of Bajor comes to an end and the Bajorans apply for membership in the Federation (as per the original timeline). Starfleet Commander Perzis Dax takes command of the ex-Cardassian mining station Terok Nor in orbit of Bajor. She and her chief engineer, Lieutenant Commander Benjamin Sisko, discover the Bajoran Celestial Temple/Wormhole in the Denorios Belt, and Sisko becomes the Emissary of the Prophets - a key figure in the Bajorans' religion (as per the original timeline).

And that's it for this installment of Star Trek: Voyages That Never Were!

(You can breathe a sigh of relief now, Herr Mago)

Posted by Inexplicable DeVice at 17:46