Ms Scarlet with the Trolley on the Mezzanine 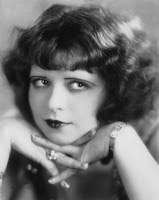 "EXCUSE ME????"  Ms Scarlet was aghast.  "Fight over the starring role???  Are you insane???  I am a natural leading lady.... See how the light follows me wherever I glide... See how the camera loves my glowing complexion.  Fight over the leading role?!  Oh, you are awful, Mr Devine."
"Look, there are two starring roles, and you've already nabbed one of them" I sighed, gesturing at Ms Scarlet in her wheelchair.  "I was only suggesting that Jon and The Very Mistress might audition to see which of them might be more suitable for the other role."

"To be a star is to own the world and all the people in it.  After a taste of stardom, everything else is poverty" Jon declared with his nose in the air as he attempted to gaze out of an age-clouded, corrugated plastic skylight.  "Besides, I think 'Whatever Happened to Baby Jon?' has a nice ring to it."

"'Whatever happened to Baby Jon?'!?"  The Very Mistress nearly choked.
"Yes.  Baby Jon.  What?  You think 'Whatever Happened to Baby MJ?' is more realistic?  No one will believe you were ever that young."
"Well, what about this then??" and The Very Mistress pulled out a copy of her unauthorised and unofficial biography and waved a picture of herself from her youth at him.
"Perhaps we should take a break, hmm?" I said glancing over to the little kitchenette tucked away at the back of the mezzanine.  We were rehearsing the dreadfully delayed Christmas panto - now repurposed as Ms Scarlet's Birthday Panto - in the tight space of the upper level of the Mogwash scout hut (which was currently doubling as the village hall due to there not being one on the map).  The main space below was in use by a member of the Littlehampton Confectionary Display Team who had booked it following the destruction of their previous venue near Southend pier by a tornado of trampolines.  "I think we could all do with a nice cup of tea and a fig roll before we go any further?"

"Ooh, yes!" Ms Scarlet almost squealed as she spun her 'chair around.  "I could murder one of Mrs Pinafore's fig rolls!"
There was an uncomfortable silence and then we glared towards the kitchenette where there was absolutely no sign of any movement by the person within.
"I said: 'I could murder one of Mrs Pinafore's fig rolls!'" Ms Scarlet practically shouted.
"Huh?  What?  Is it me now?" a drug-addled Dinahmow asked as she looked up from reading a magazine.
"YES!" we all cried.
With an over-exaggerated dodder, Dinah didn't exactly hurry as she pushed a trolley laden with a bizarre spread of refreshments.  "Why don't we all have one of my homemade fig rolls and a noice cup of tea?" she said, expertly ignoring the furious eye-rolls that we directed at her.¹
"What the...?" Ms Scarlet spluttered as she failed to find any fig rolls.  Then, as she moved her gaze past an enormous Black Forest gateau (which she wasn't sure she even liked) covered in far too many candles (which she definitely didn't like), she caught sight of something pink and quivering.  "Is that-"

"THE SALMON MOUSSE²" I intoned, pointing at the offending item with a finger that certainly wasn't wizened and crone-like at all!
Four pairs of eyes widened and looked at me in surprise.
"AH.  UMM..."  I cleared my throat.  "Ahem.  Heh.  Sorry about that.  Forgot myself for a moment."
Ms Scarlet recovered first.  "Where are the fig rolls?" 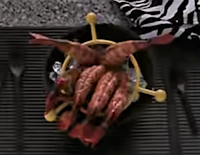 "Fig rolls?  Yes.  Um."  Dinah struggled as she looked intently over the trolley then picked up a bowl containing some dangerous-looking crustations³.  "Prawn cocktail instead, anyone?"
"Urgh.  No, thanks" Jon grimaced.  "Prawns tread water at the end of sewerage pipes all day long with their mouths open.  Besides, those ones look like they might eat us!"

There was a polite cough from the wings.  "Entschuldigen Sie, bitte?"  It was Mago, our producer and props supervisor.  "I fear we're never going to adapt this 'Baby Jane' into a panto.  Besides the fact that French & Saunders und both Herr Beast & Ms Scarlet have already done it - much better, mind - we've run out of parakeets und there just aren't enough parts for everyone."
"Well, there's the role of the maid?" The Very Mistress suggested.
"Carmen's already nabbed that part" I said.
"Carmen?  Mitzi's Carmen??  How did she manage that?  She hasn't even got her own blog.  She's little more than a non-speaking extra at Mitzi's!"
"Oh, and there's the neighbour, Mrs Bates, and the voice of Mr Jones at the corner shop?" Jon added.
"Charmaine's playing the neighbour, and-"
"Charmaine?!? I hope she washes the vinegar and peppermint stink off before opening night.  And don't tell me: Sid's Mr Jones?"
"Don't be ridiculous, Jon" Ms Scarlet cut in.  "Sid can't talk.  No, one of Maddie's houseboys is playing Mr Jones."
"But they don't talk either! They always seem to have their mouths full..."
"Fine!  We'll do something else then."  Ms Scarlet sighed and pushed herself up out of the wheelchair.
"Wha-?  You... You can walk?!" Dinah was agog.
"Of course I can walk!"
"But I thought Jon and Car had smushed your legs to smithereens?"
"Well, they tried.  But, the thing is - and I'm sorry if this upsets you, Mr Devine - Car's mostly rust these days, and as soon as it hit me, the bonnet and bumper dissolved into dust.  My legs are fine. I'm fine."
"But...  But why all the time in the wheelchair?" Dinah asked.
"Method acting" Ms Scarlet answered far too quickly.  And after a momentary flash of shame she added:  "And it's been all go lately so I was glad of the sit-down opportunity.  I'm only up and about now because I can't stand anymore bloody parakeet à la tangerine!  I'd prefer a nice bit of squirrel."
"Weren't you listening to Mago?" I snapped, still reeling from the Car-related slight.  "We've run out of parakeets, anyway!"
"Oh."
Dejected at having got up for no reason and having her birthday panto cancelled, Ms Scarlet staggered towards the fainting chaise, but slipped on an errant prawn (who had the prawn cocktail after Jon's tidbit of info about them??) and landed on Mrs Pinafore's hostess trolley.  The force of the fall set the castors in motion and, rather than the elegant trolley dance enacted by the Witches of Eastwick⁴, Ms Scarlet atop the trolley on the mezzanine careered across the floor in a Carry On Again Doctor-style calamity⁵. 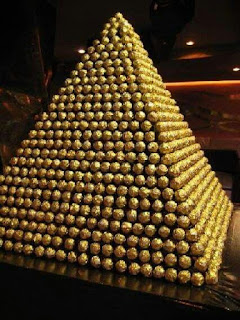 Transfixed, the Blogorati stared in morbid curiosity as the Ms Scarlet-topped trolley plunged over the edge of the mezzanine and rattled down the horrid metal stairs towards the oblivious Darren who, in a zen-like trance, was placing the final golden ball atop the summit of a gigantic Ferrero Rocher pyramid⁶.
The hostess trolley smashed into the pyramid - which exploded into hundreds of Ferrero Rocher projectiles like a chocolate and hazelnut firework - and came to an abrupt halt, flinging Ms Scarlet and various foodstuffs all throughout the scout hut.  Ms Scarlet grabbed hold of the chandelier single pendulum light fitting as she passed by and watched in horror as her Black Forest gateau birthday cake described a perfect triple salchow through the air on its doom-laden arc to a splattery end.
Then, with the gateau mere micromips from the melamine flooring, a black-clad hand and arm shot out from a faded green velour curtain - that hid the stacks of uncomfortable chairs used to seat audiences of very amateur dramatics - and caught the cake.  Right way up!

But as soon as it appeared, the limb was gone - retracted into the spider-webbed darkness.
And taking the cake with it!!!

A Ferrero Rocher Pyramid!  A Hostess Trolley Disaster!!  A Black Forest gateau abducted from the brink of oblivion!!!  And just who is the mysterious cake catcher?!?

Tune in next time for The Calamities of the Carmine Quill!


2. Death and the Salmon Mousse, from Monty Python's The Meaning of Life


4. Elegant Hostess Trolley Dance, from The Witches of Eastwick


6. Ferrero Rocher pyramid at The Ambassador's Party, from A Sign of Good Taste by Ms Scarlet