Right.  That's the first quarter of the year done.  To aid in the preparation of the end-of-year review/Coven Awards, I thought I'd continue on from January's book post and Happy with a round up of what I've read, watched and listened to so far in 2021.

∘ Lords and Ladies, by Terry Pratchett - A Discworld novel starring the Ramtops witches (Granny Weatherwax, Gytha Ogg, and Magrat Garlick - who is now a queen rather than a witch), in which they thwart an invasion of Elves.

∘ The Sea and Little Fishes, by Terry Pratchett - A short story I read online also featuring the Ramtops witches. 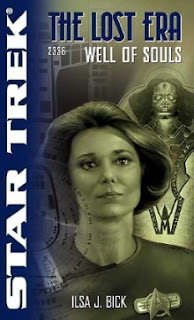 ∘ Star Trek: The Lost Era: Well of Souls, by Ilsa J Bick - This is a rather grim, but engrossing story set during the time of the Ambassador-class USS Enterprise NCC-1701-C (2336).  It largely concerns Captain Rachel Garrett's strained relationship with her archeologist ex-husband and son, and her new first officer who has found himself embroiled with a notorious crime syndicate.


∘ Star Trek: The Lost Era: The Art of the Impossible, by Keith R A DeCandido - Another Lost Era story, this one concerning the Betreka Nebula Incident - a dispute between the Klingons and Cardassians, mediated by Federation Ambassador Curzon Dax, spanning the years 2328 to 2346.

∘ Star Trek: Department of Temporal Investigations: Watching the Clock, by Christopher L Bennett - A fascinating tale set mainly in The Next Generation era (2360s-80s) that weaves together various of the televised Star Trek universe's instances of time-travel, along with several original temporal trips.  As always, Christopher L Bennett serves up a precise and characterful story that's difficult to put down.

∘ The Murderbot Diaries: All Systems Red, by Martha Wells - The first novella of The Murderbot Diaries series which I only read because of this wonderful animatic set to Tegan & Sara's "I'm Not Your Hero" that I discovered at Tor.com (and last featured here).  I enjoyed it enough to want to read the next in the series.


∘ The Galaxy and the Ground Within (Wayfarers 4), by Becky Chambers - Another delightful story from the Wayfarer's series (and possibly the last).  This one is about how five very different aliens form a friendship during a disaster, and is just a lovely, warm, character-driven piece with one or two stomach-lurching emotional moments near the end.  Just wonderful!

∘ Futmalls.com (Netflix) - I was intrigued by the premise of this Taiwanese series: Police investigate three cases which are linked by a shopping website that sells things from the future.  Plus, the lead actor, Bryan Chang, is rather cute!

∘ Superstore (S1-5) (Netflix) - as first mentioned here.   Funny, ridiculous, and a welcome escape from the grinding misery of real life.  There is a sixth season (not yet on Netflix), but I don't think I'm going to watch it when it becomes available over here as I like how things ended in season five (I've read that America Ferrera's lead character, Amy, is only in the first two episodes and I don't like the in-story consequences of Amy's departure).

∘ Invisible City (Netflix) - A Brazilian series about a(n extremely handsome) environmental police officer (who gets his shirt off at least once, thankfully) investigating the death of a pink river dolphin.  During the investigation, he discovers mythological creatures living amongst humans that seem to be linked to the death of his wife.

∘ [Is love enough?] Sir (Netflix) - I loved this bitersweet Mumbai-set romantic drama about about a man and his maid, and the obstacles of their social and class differences.

∘ A Suitable Boy (BBC iPlayer) - In a newly independent India, a widow tries to set her youngest daughter up with a "suitable boy".  However, her strong minded daughter has other ideas about the arranged marriage, and their extended family's issues don't make things any easier.

∘ Sputnik (Netflix) - A Russian sci-fi horror film set in 1983 about an alien lifeform inadvertantly brought back to Earth.  Rather grim.

∘ Only Yesterday, From Up On Poppy Hill, Whisper of the Heart, Castle in the Sky, Kiki's Delivery Service, My Neighbour Totoro - Utterly beautiful, charming and enchanting Studio Ghibli animated films, all on Netflix.  I've already started rewatching them.

∘ Space Sweepers (Netflix) - I was really surprised by this heartfelt and emotional South Korean "space western".  The trailer made it seem like a gung-ho action film (some parts are) which put me right off, but it has some wonderful characters and an excellent trans allegory (this review at Tor.com is what made me watch it).

∘ I Kill Giants (Netflix) - Instead of coming to terms with the absence of her mother, a young girl fights giants.  Or does she?  As the story went on, I got more and more into it, loving what I was seeing, and then came the ending which left me rather disappointed (I had hoped for something more ambiguous).  Oh, well...

∘ What We Left Behind: Looking Back at Star Trek: Deep Space Nine (YouTube) - An excellent documentary (including almost all of the cast) which could have gone on MUCH longer, as far as I was concerned.


Amongst all that new stuff, I found time for some rewatches: Marvel's The Defenders, Marvel's Jessica Jones (S3), Russian Doll, Special, Alphas, Dead Like Me, Absolutely Fabulous, a smattering of Star Trek, The Meg, and A. I. Artificial Intelligence.

Continued from December's Overheard and Wonky Words, and other posts containing the 'Music' tag/label, here are my most listened to tunes so far this year (a number of which I was introduced to or [re]discovered last year):

So, see anything familiar?  Or anything take your fancy?  And what have you all been reading, watching, and listening to?

Posted by Inexplicable DeVice at 19:04

Labels: Blogorati, Books, Crush, I We Me Us, Ms Scarlet, Music, Star Trek