What can he mean, special machine?*


Time for another book update as I have nothing else worth posting at the moment.

This childrens - or, young adult, I should say - story, is a surprisingly chilling tale.
In a small town, a peculiar rain of tiny, multi-faceted, toroidal objects fall. Millions of them. Billions. Trillions! Within hours, they have fallen all over the world. Initially, they appear benign, but soon start to link together forming copies of manmade objects, including tanks, missiles and bombs. One boy finds a way to communicate with them. He asks what humans should do for the Trillions and they reply: "Hate us".

I love this book so much! I first read it years ago when I was a boy and have read it many times since. Even though I know the story inside out, I still get something new from it with every read. And those two words - "Hate us" - read in that context never fails to send shivers down my spine!

Continuing with the Deep Space Nine re-read, this is the follow up to Gateways: Demons of Air and Darkness that I read back here (along with three other DS9 novels).
This is the first of four books in the Mission Gamma mini-series which detail Commander Elias Vaughn's three month mission of exploration in the Gamma Quadrant, alongside the DS9 crew's preparations for Bajor to become part of the United Federation of Planets back in the Alpha Quadrant.
I'm a big fan of David George's writing - he's very detailed and his character work is excellent. The tales he tells are never rushed, which really helps to become immersed in the story. I've got another six DS9 books to read before I get to the next one written by him (The Dominion: Olympus Descending), but he does have a new DS9 novel coming out at the end of next month which I'll probably read as soon as it arrives - Ascendance, the follow up to Sacraments of Fire which finished on a cliff-hanger. 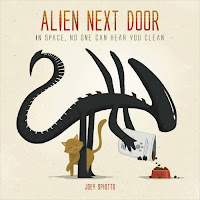 54. Alien Next Door, by Joey Spiotto

I bought this picture book to give to Indescribable and Babyzilla for Christmas, but I couldn't resist a quick read first. Well, I say read, but as it's a picture book, there's no text, just very funny and cleverly thought through images of the adorable Alien trying to live a normal life.

Here are just three of my favourites:

55. The Long Way to a Small, Angry Planet, by Becky Chambers

I love this book. I LOVE IT!

It's about the (mostly) close-knit crew of a spaceship, the Wayfarer, that opens interstellar tunnels from one star system to another, allowing travel, commerce, etc. What they do isn't anywhere near as important as the crew themselves, something that the author and I agree on, which is why I enjoyed this book so much.
This wonderful novel focuses on how the diverse crew get along and interact with each other and the people they meet during their year-or-so long job. There are so many set-ups for obvious conflict and cliched tropes, but none of them ever come to pass which is so wonderful! These are nice people. They are enlightened, fun, accepting, loving, definitely not perfect, but a far cry from the damaged, bitter characters that could so easily have populated this story. Race, gender, sexuality - all these topics and more are explored without hand-wringing angst, melodrama, and violence.
There are a few horrible moments, though: an attack by space pirates (but even this is handled in a brilliantly enlightened way), the nearing extinction of a sapient race, the arrest of a crew member, and an unexpected death. But, even these moments are handled in a non-obvious, non-stereotypical, but realistic way.
While reading this book, and now that I've finished it, I'm reminded of Gene Roddenberry's vision of the future in Star Trek: A utopian future with no war, no disease or famine, where everyone gets along for the greater good. The author has managed to capture this vision, but with realistic touches.

Amazing! I thoroughly recommend The Long Way to a Small Angry Planet, and I hope Becky Chambers gets to write more stories in this universe she's created.

Posted by Inexplicable DeVice at 11:23