"It looks like she spontaneously combusted at the muff!"*

After the "success" of my last repeat post, I thought I'd give it another go with these two - yes, two! - re-runs from 2007 and 2010 respectively (these were the ones I was going to do before Beast and Tim stole the show).  I think they're quite appropriate for the circumstances that we find ourselves in, as they illustrate why one should keep one's distance from others as one never knows what may happen... 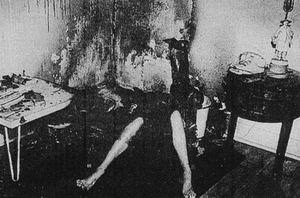 I only tapped her on the shoulder to ask if she wanted a coffee and she spontaneously combusted.

She could've just said 'No, thanks'.

Silly cow always has to be centre of attention...

* I loved Piggy (mayherestinpeace) & Tazzy's comment on the original post so much that I thought I'd use the first part of it as this post's title.

and: The Gunpowder Plop

She said she was bursting for the loo.
I didn't realise she meant it literally until she exploded. 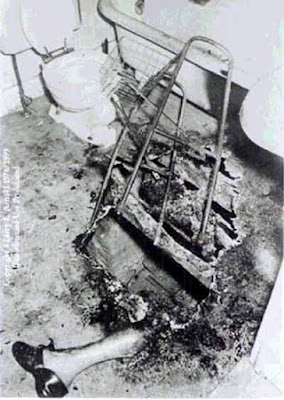 I told her that smuggling gunpowder would be her undoing.

And there you have it for another day.  And another month - See you in December!
Although, after this month's flurry of activity (November hasn't been this productive since 2007!), don't expect much to be going on next month - two or three posts at a push, I should think?  Especially as I shall be working almost non-stop on the Coven Awards - the panic that the end of the year will soon be upon is is beginning to set in...
Posted by Inexplicable DeVice at 00:00