There's Nothing On But Repeats

As Ms Scarlet seems to have much success with repeats of old blog posts, I thought I'd give it a go, too.  I had found a couple of rather old, explosive posts, but the return of Beast and Tim brought something else to mind: a trip over the Cusp starring none other than the two Blogorati of yore:

Witches Getting on Beast's Wick
(first seen nearly ten years ago for Beast's birthday)
It didn't take long for the blood to stop rushing to his brain and the almost overwhelming nausea and vertigo to fade.  As the gold and blue fireworks cleared and his vision returned, he noticed the vast expanse of reeds around him and a distant mansion at the end of a sweeping gravel driveway.

There were voices, too, in mid-conversation:
"Of course, I wouldn't know a snowy egret if I were pissing on one. Lunch?"
"I think it's a little late in the season."
"For lunch?"
"No, pissing on birds."
There was a pause which was when he realised that the two, very familiar, conversationalists were staring at him.  Quickly taking in his surroundings, adding two and two together and resignedly coming up with four, he despaired and his shoulders fell. 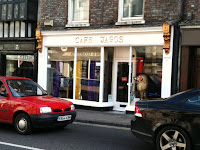 Oh, no, Beast thought to himself.  Oh, please no.   Outwardly, he sighed at the realisation that he'd been dragged over the Cusp again without so much as a by your leave.  It was his bloody day off from Cafe C and here he was, over the bloody Cusp in bloody Eastwick, dressed as bloody Fidel to do the bloody bidding of Tim bloody 'Van Horne' and 'Alexandra' bloody DeVice.  Plus the rest of the bloody Coven, no doubt.  If he'd surmised correctly, they were at the point in the story where Van Horne had invited Alex for lunch - read: banquet - which he, as Fidel, was to prepare.  Bloody.  Hell.
And to make matters worse, this was yet another non-speaking part.  And on his birthday too!
By this time, the stares had turned into baleful gimlet glares with no small amount of contempt evident.  Nodding submissively at Tim's unspoken order for an elaborate lunch with which to woo IDV, Beast's shoulders slumped even more as he trudged off towards the mansion kitchens. 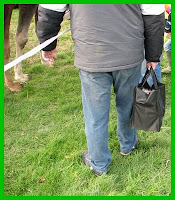 A hard day's work later found Beast grappling with suspiciously stiff and stained bed sheets following Tim and IDV's 'retirement' after the lavish meal he'd prepared for them.  He shuddered at the memory of them discussing the size of his Roy Cropper bag as if he wasn't right there waiting on them hand and foot, all the while wolfing down his exquisite succulent pork balls and sausage in cider (complete with glistening tomatoes and a constellation of assorted salad vegetables, studded with black olives. Somewhat bizarrely, he thought, they'd declined his kipper surprise). A whimpering that was loud enough to be heard over the crunching of folding sheets snapped him out of his reverie.  It was coming from the en suite bathroom.  Dropping the sheets with a thud, Beast gingerly opened the door and peered into the steamy room.  There was someone curled up in the shower, rocking and crying.   It was Tim!  Sighing, Beast prepared himself to comfort the poor boy following IDV's relentless pestering and innuendoing amongst other unmentionable things.  Although, quite why Tim put up with it, and even came back for more, was beyond him.  Perhaps Tim actually liked it?

That evening, after rushing around getting the washing in after the witches made it rain while playing an infernal game of tennis, vacuuming the entire mansion and clearing up hundreds of balloons from the grand hall & staircase, an exhausted Beast was labouring again over a hot stove to create a meal fit for a bunch of queens.  Tim, now fully recovered thanks to Beast's tear & snot-sodden shoulder, along with IDV, Cyber'Jane' and Princess 'Sukie', were mucking about on the poolside, oblivious to all the hard work Beast had put in.  To make things worse, Mr C had lumbered Beast with Alfie & Lloyd while he went out to purchase new swimming trunks after the aforementioned Hell Hounds had devoured his existing pair.  Gods knew how Mr C had managed to get them over the Cusp.  Beast suspected Mr C's demonic inklings were more than just inklings. 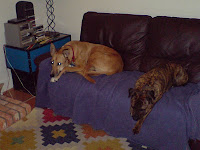 With dinner finally ready, Beast wiped the sweat from his brow, pulled off his pinny and picked up the dinner bell before walking out to the swimming pool.  Fighting his way through the sheets draped around the room (well, he had to hang the bloody washing somewhere to dry out after that magical rainstorm, didn't he), he raised his bell-hand intending to give it a good shake.  However, Alfie and Lloyd got there first.  Alfie jumped up at the bell while Lloyd wound himself around the hapless Beast's feet, tripping him up.
Time seemed to slow down as Beast plummeted to the hard tiled floor.  He watched the bell describe a perfect arc through the air as it fell from his grasp.  He saw the strings and globules of slobber spray out from Alfie's gaping maw as he lunged for the bell.  And he noticed the witches levitating over the pool, laughing and giggling while Tim watched from his vantage point, reclined on a chaise longue eating cherries.
Then the bell, narrowly escaping Alfie's snapping jaws, landed with a crash on the tiles.  The loud, jarring clang brought time snapping back to it's normal flow and, with it, screams from the witches, all three of whom fell unceremoniously into the pool fully clothed.  Beast permitted himself a gleeful smirk.  His mirth at their misfortune was short lived however. 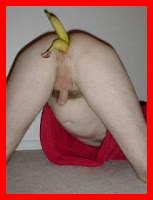 "Beast!" Tim yelled.  "What the hells are you doing?  Stop messing about with those dogs and help the... Girls" he grimaced, "into some nice, clean, fluffy bathrobes."  Before Beast could respond, Tim continued.  "And we've run out of cherries - Fetch some more.  Preferably some that haven't 'enjoyed' the same experience as your bananas.  Oh, and don't bother with dinner - We had pizza delivered earlier and aren't hungry anymore."  Beast stood up with his mouth agape.   "Well?  Snap to it, then!" 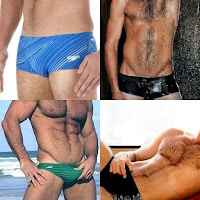 The next morning found poor Beast armed with a pair of tongs at the poolside, picking up pieces of Tim's ripped Speedos from the swathes of cherry stones that littered the tiles.  He'd politely shunned Tim's request to don rubber gloves for the task - due to his phobia - so as not to contaminate the Speedos with Beastliness, hence the kitchen tongs.  He tried not to think how one small pair of trunks could get torn into so many pieces, but knew he'd be consoling Tim very soon when he remembered the 'guests' Tim had been 'entertaining'.  Tim usually sold the worn, unwashed trunks on Ebay along with various 'during' photos to various perverts (none of whom live in Norfolk, by the way.  None at all.) which was how he funded his materialistic, hedonist lifestyle.
Picking up the last shred from the Speedo jigsaw, Beast jumped as Tim bellowed at him from upstairs.
"Beast?  Get my car ready," he commanded.  "We're going out to get breakfast.  Bagels and ice-cream. Now!"
Giving a world-weary sigh, Beast popped the last bit of Speedo into the zip-lock bag containing the rest and headed out to the garage.

In what would have been a hair-raising journey had he got any later, Beast was deposited in the market place while Tim roared off in his MINI Clubfootman for ice-cream.  Despite his repeated offers to chauffeur Tim into town, Tim had refused, citing Beast's tendency to drive like an old woman.
Fifteen minutes later, Beast emerged from the hardware store laden down with purchases.  It was then that he noticed the wind had got up somewhat.  Suddenly, a gale-force gust blew through the market square carrying Tim with it amidst a cloud of feathers.  He was filthy - Covered in mud and half-digested cherries, and his clothes were torn and ripped where they'd been scraped along the tarmac.  After a brief struggle, Tim managed to get in the car and roared off leaving Beast standing alone with his armfuls of shopping.
Oh, well, Beast sighed to himself.  It's probably best that he left me here.  I'm sure I don't want to know what they're up to now.  Although, I imagine the clearing up will be left up to me again.   He huffed and began the long trudge back to the mansion.  Perhaps Mr C's tyrannical ruling of Cafe C and his diva rants aren't so bad, after all? he pondered.  And at least I haven't had to deal with MJ in this whole Cusp debacle.  Speaking of witch which: I wonder where that old baggage is?  She's always a part of these adventures.
It was then that he noticed someone on crutches, determinedly headed towards him across the green in front of the church, a steely glint in her eyes and a glassy glint of a bottle of Jameson's sticking out of her pocket.
Oh, dear. I spoke too soon...


All Beast photos courtesy of MJ. To find out more about poor Beast, why not click here for MJ's thoughtful snippets about him from last year.

And there you have it.  I was going to just copy & paste, leaving all the spelling mistakes and awkward formatting as it was, but the old HTML didn't see eye-to-eye with the "New and Improved" Blogger interface, so while I was mucking about with it, I also changed one or two other things as well (OCD got the better of me, basically).

Posted by Inexplicable DeVice at 19:41