That Old Back Passage Called Love

Madam Arcati's latest Delargo Gardens post once again had me reminiscing about the tight, jungly confines of my own Back Passage when I lived in Norwich twenty-odd years ago.  So much so, in fact, that I found myself trawling through reams of old pictures on a USB stick trying to find some photos. 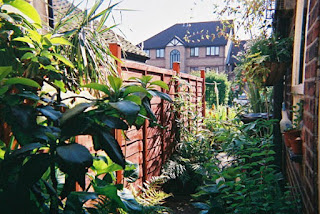 Well, I did find some, and rather than let all that time and effort go to waste, I thought I'd pop a selection of them up here (because I have nothing else prepared or even remotely ready in draft).  I also searched through my dusty old blog crypt for ancient posts that featured the original Castle DeVice's tiny garden.  Although I lived in Castle DeVice from the back half of 1998 to early 2009, I can only find photos from 2006 onwards (I think that this must have been the time I discovered digital photography)...


While you explore my back passage, why not listen to Ella Fitzgerald singing about it (she misheard "Back Passage" as "Black Magic", but she is getting on a bit...):


Note: I spent ages getting all the photos in date order, from August 2006 to December 2008.  Then, as soon as I viewed them all together, I realised that they'd look better in month/season order to show the progression of growth, so that's how I've displayed them here.

Late April (2008) - Left: Halfway down my back passage and nearing my back door, an avocado tree (grown from a pit), arum lily (Zantedeschia aethiopica), various ferns, a hanging basket in need of a good sort out, and some bamboo.
Middle: Just inside the entrance to my back passage are a couple of New Zealand flaxes (Phormium somesuch), heuchera, a tufty old bit of blue-green grass, and some daffs.
Right: The paysho - or staging area to my back passage - repleat with a potted box (Buxus), rose, bluebells, geranium, daffs, scylla, and violas. 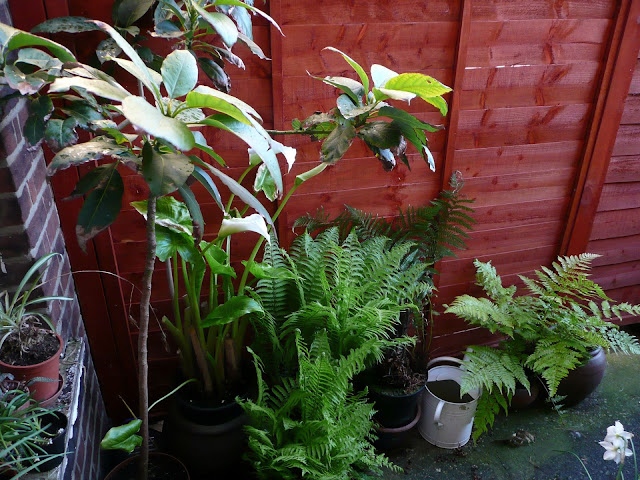 April still - Above: View from my back door - mainly avocado, arum lily and ferns.
Below: Close-up of the arum. 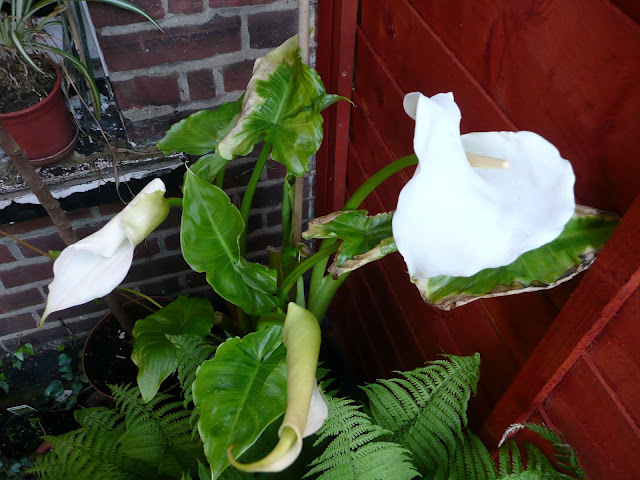 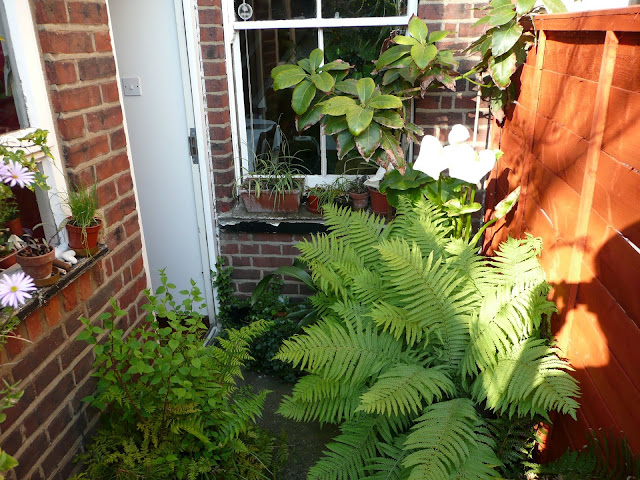 Early May (2008) - What a difference a couple of weeks makes.  That's a mock orange (Philadelphus somethingorother) in the pot with the small fern at bottom left, and aspidistra poking out from behind the big ferns, and an array of bulbs on the windowsill (I think the ones in the oblong pot are snake's head fritillaries). 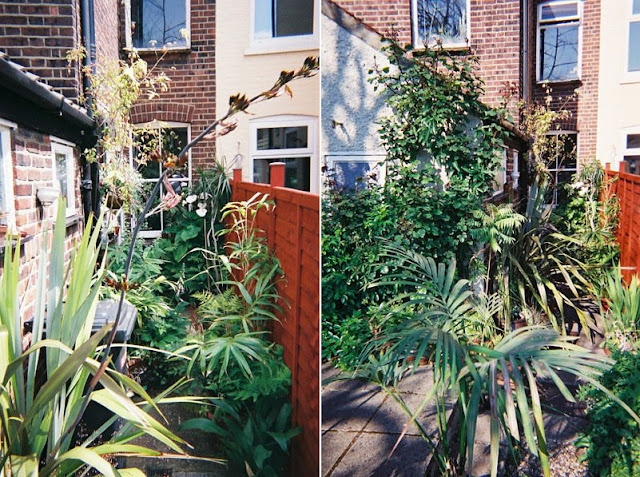 Late Spring (2007) - Left: Even though the original date stamp of these photos are lost, I know it must be late spring because I've put my Madagascan dragon tree out (Dracaena reflexa var. angustifolia AKA D. marginata) in front of the arum.
Right: Also evidence of late spring - the triffid rose enveloping the bathroom...
(photos can be found on my blog here) 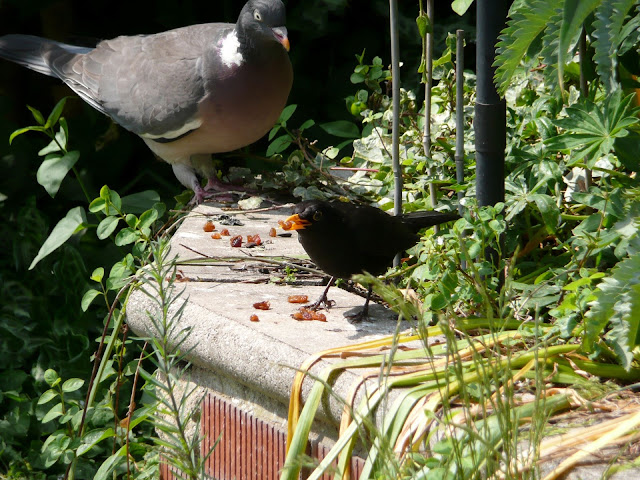 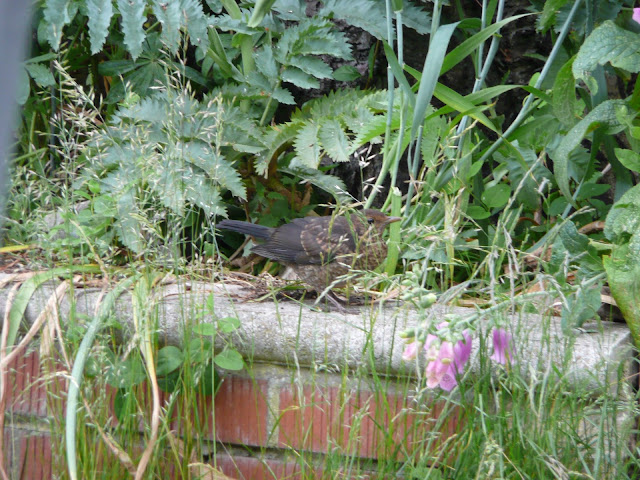 And take your vile offspring with you! 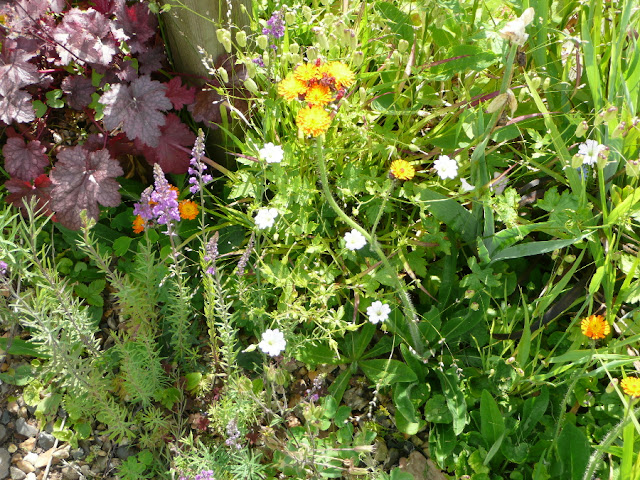 Early Summer (2008) - Some wild flowers growing in the gravel path next to the paysho.

More early Summer photos - Right: My rather lush looking back passage.
Middle: The triffid rose not looking as triffidy as it did in 2007.
Right: My Giant Honey Flower (Melianthus major) swamping the foxgloves growing around the cherry tree (one of my palms is in there somewhere as well). 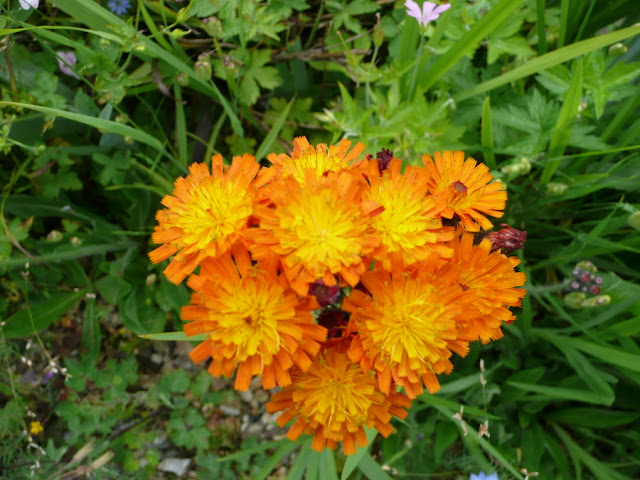 A close up of a variety of hawkweed (I think?) from the gravel path. 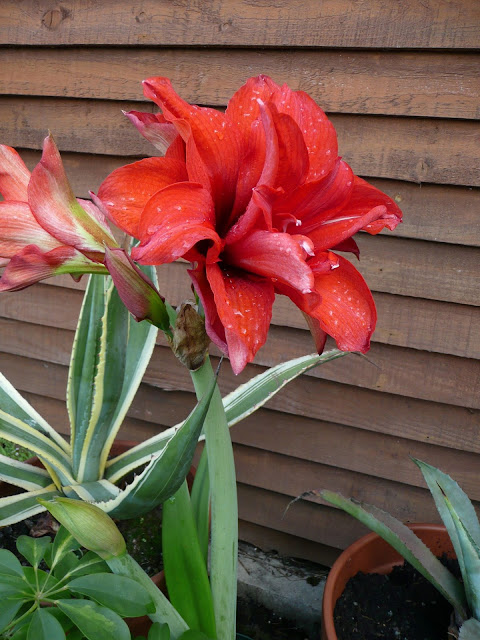 I think this Hippeastrum was a gift? 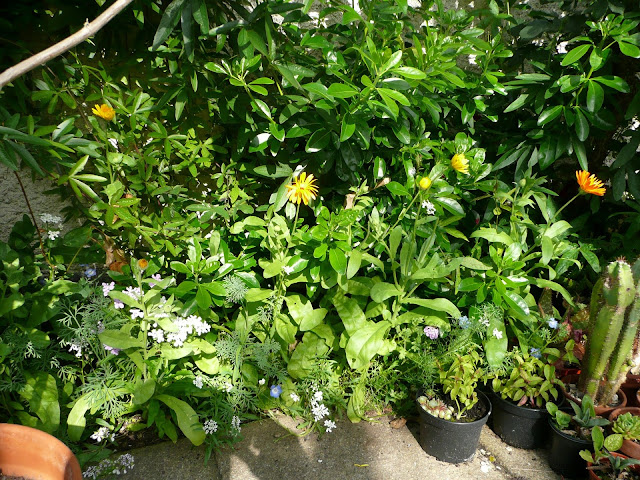 Mid-Summer (2008) - Some wildflowers growing under a Mexican orange blossom (Choisya) and the triffid rose in the little border between the paysho and bathroom.  There are a couple of fuchsia cuttings in pots on the right (which I still have!), and my Not-Dragons (Selenicereus undatus). 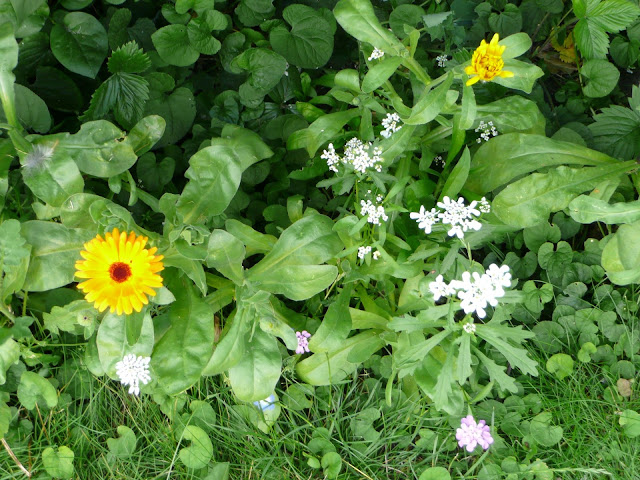 More wildflowers growing amongst the wild violets and wild strawberries at the bottom of the garden in front of the garage.  The seeds were sent to me by Eros. 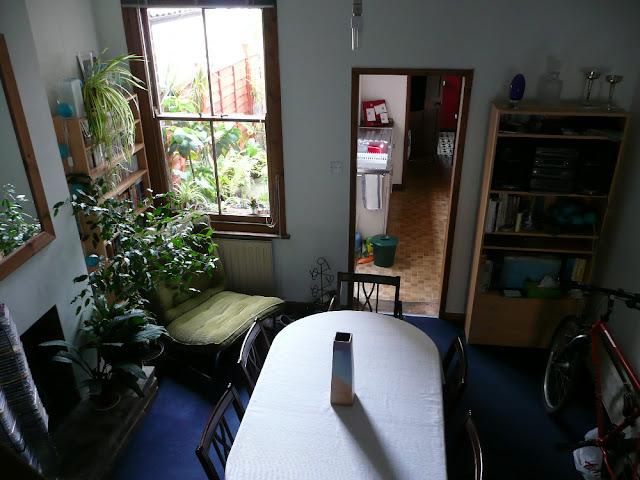 I included this photo (from July 2008 featured in this post) as it shows how the outside greenery continues inside. 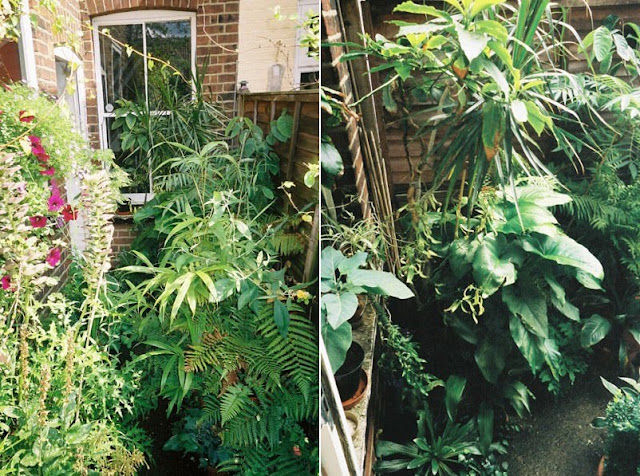 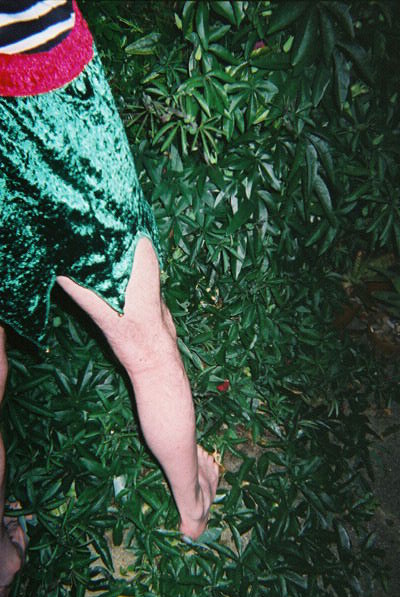 All but one of you must ignore the Freakin' Green Elf Shorts and concentrate instead on the out-of-control growth of my Passionflower (Passiflora caerulea) as it swamps the paysho. 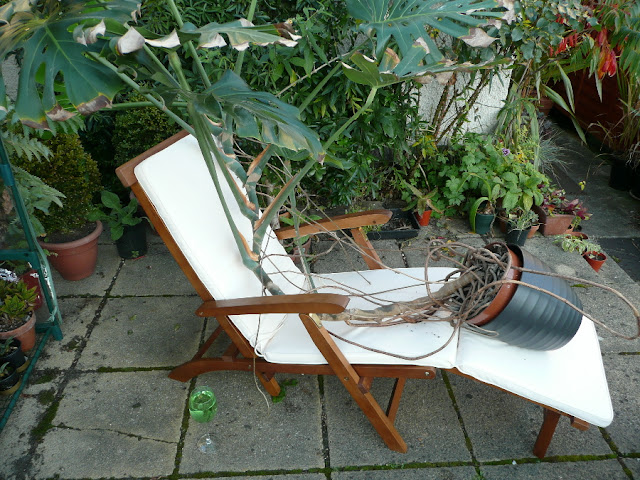 Ah, the October garden.  I got home to find Margaret 2.0 lounging about on the paysho after she tired herself out doing shit-all all day! 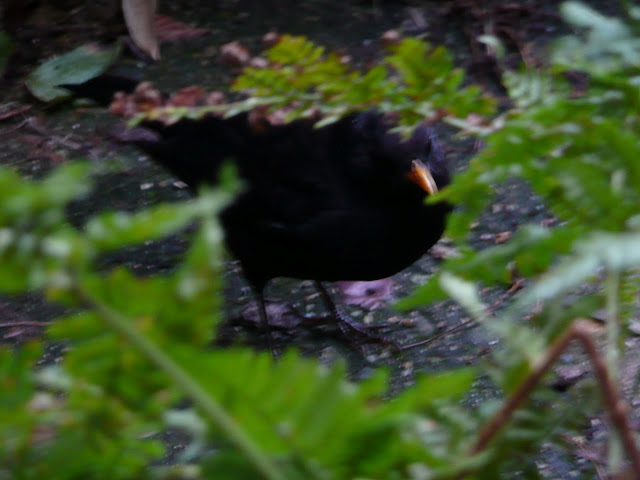 And, finally, Winter.
Shhhh!  It's Beaky!  Keep still and don't knock into the ferns.
I'm not hiding from him, you are!

Posted by Inexplicable DeVice at 14:03