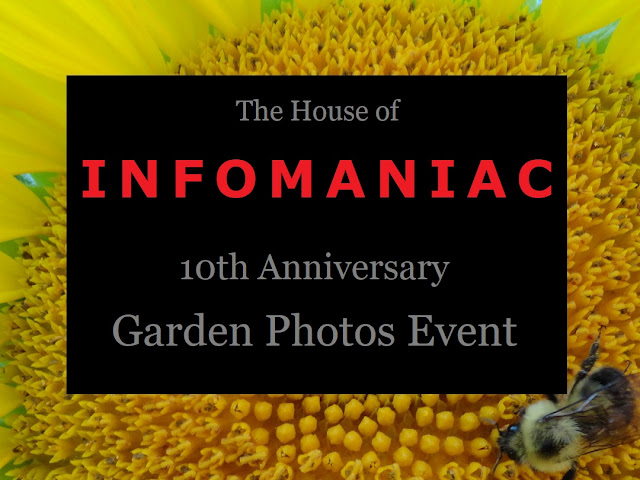 First, a little history of this auspicious event: Back in 2011, everyone's favourite Lazy Baggage (thank you, Beast), The Very Mistress (then known as MJ), decided that she couldn't be bothered to make any further effort on her blog, and swanned off to Montreal to get away from it all.  Just before she left, she tasked her Infomaniac Bitches to send in photos of their gardens or other greenery that she could display upon her return, probably thinking that there'd be two or three photos that she could just paste into a blog post, add a couple of captions, and publish while she collapsed with a Jameson's or twelve.

Little did she know how popular this would be, however, and returned to garden photos from 21 of her faithful Bitches.  With what I imagine to be an enormous sigh, an over-dramatic eyeroll, and no small amount of swearing/drinking, The Very Mistress got to work collating the photos and organising them into a tasteful (ahem) display for her Bitches' voyeuristic enjoyment, and the first Infomaniac Garden Photos Event was born!

With the event a resounding success, The Very Mistress brought it back the next year, and the year after that, and every following year.  And now, ten years later and true to form, the Lazy Baggage The Very Mistress gracefully demured from hosting the Garden Photos Event herself and palmed it off bestowed it with great honour upon her throng of gullible suckers attendant Bitches.

Which is why, in this tenth anniversary year, you find the Infomaniac Garden Photos Event being held here at Inexplicable DeVice rather than at Infomaniac.

Right.  Now that's out of the way, let's get on with the gardens.  Opening the show we have photos and accompanying blurbs from none other than The Very Mistress herself.  As usual, click to embiggen. 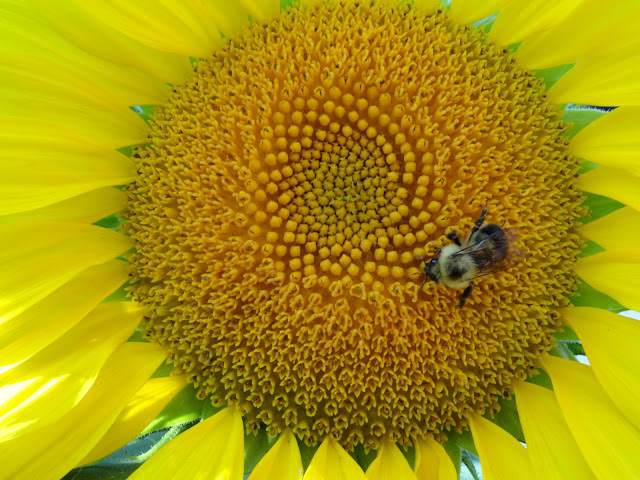 The Mistress grows hundreds of sunflowers of all shapes and sizes in her garden each year. This photo was taken in 2019. This year's sunflowers towered over 8 feet high - too high for me to get a closeup like this one.

This summer, I managed to get some photos of half a dozen honeybees on one single sunflower. However, the flower was much smaller than the one pictured. It didn't have the same "Terrifying Triffidery" as the larger flowers.

They're very easy to grow! The Mistress recommends planting sunflower seeds in a spot where they'll get 6-8 hours of sunlight per day. There are dozens of varieties to choose from - smaller varieties that grow to about a foot high, all the way up to sunflowers that reach staggering heights of 14 feet or more.

Why do I plant so many sunflowers? Because I love their "in your face" brassiness, I enjoy attracting wildlife to my garden, and I want to help the survival of our bee population. Sunflowers attract bees and other wildlife like crazy. The bees will be buzzing with joy if you include even a few sunflowers in your garden. If your aim is to attract bees, choose yellow sunflowers over the reddish ones as the yellow flowers are much more attractive to bees.

Birds will flock to your sunflowers. The Mistress's garden is full of lovely little goldfinches who enjoy pecking at the sunflower heads. 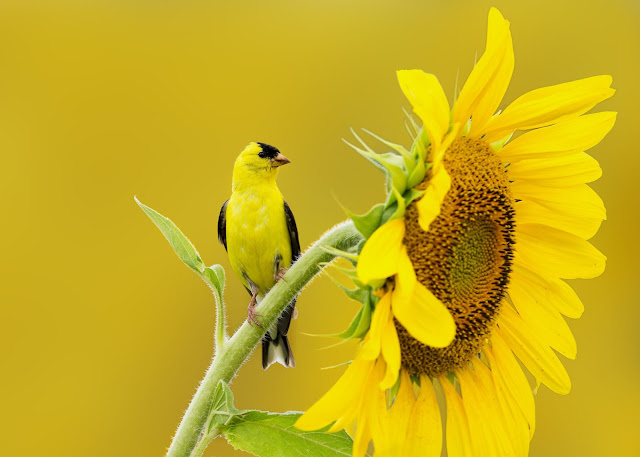 The Mistress's wildlife photos were too blurry to include so she's shamelessly lifted this off the Internet for your viewing pleasure. Above is a male goldfinch contemplating the tasty goodness of a sunflower.

When the sunflowers are ready to harvest, squirrels may chew off the heads of the shorter sunflowers. However, if you've planted enough sunflowers, you won't miss a few. I have enough sunflowers that I can cut off a few heads, place them on the ground, and let the squirrels, chipmunks and other critters have a picnic. You might want to dry some sunflower seeds for your own nutritional snacks, too. 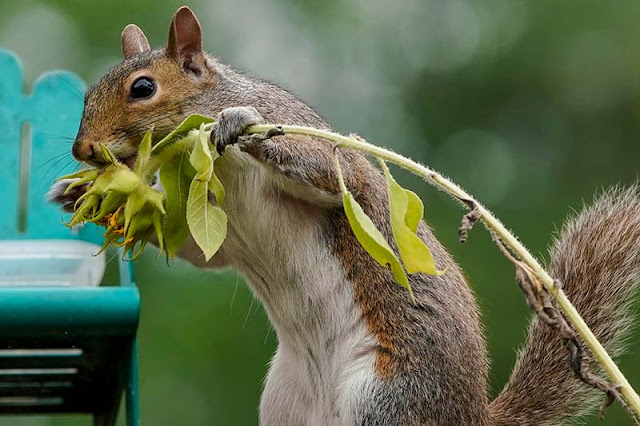 Again, this photo was plucked from the Internet. This squirrel is taking down a smaller variety of sunflower. I find half-eaten sunflowers strewn all over my neighbourhood as a result of their antics.

One other side effect of planting sunflowers is that passersby will stop and stare, and smile. They will often comment that they love the sunflowers in my garden, and that looking at them makes them feel happy. As misanthropic as The Mistress can be, if she has brought a smile to someone's face, especially in these trying times, that's a good thing, n'est-ce pas?

🌻
Thank you Very Mistress for your garden photos, and for allowing me the honour of hosting the 10th Anniversary Garden Photos Event!
For those who would like to tour Infomaniac Bitch gardens of yore, please click through the list below:
2011: It all began in August with a bra full of petunias...
2012: In a rare divergence from the Infomaniac norm, the event begins with an athletic, young naked man...
2013: Another young naked man?  What gives??
2014: The first unveiling of Ms Scarlet's BIG PINK BUSH!™
2015: He's not particularly fat, or particularly old, but he is naked.  And there's a pendulous surprise at the end...
2016: Despite an ingratiating reference to Canada, LX's entry didn't win (because the Gardens Photos Event is NOT a contest!)
2017: This is when the Garden Photos Event was first split up into a post per garden.  Plus, the first useage of the word "codfanglers".
2018: The post-per-garden presentation continues due to popular demand.

Apologies if I missed anyone from the list.  If I did, let me know who & when and I'll get them included.

For anyone who missed the Terrifying Triffidery, please see the previous post.  And in the next Garden Photos Event post we shall be exploring the Extensive Grounds of Delores Delargo Towers.  Stay tuned!
* Title courtesy of dear Mago's combambumbelment (which has a completely different meaning to combumbambelment).
Posted by Inexplicable DeVice at 14:31