Disappointments and Delights
at

I'm not overly thrilled with how our garden has grown this year.  The prolonged cold from winter, through spring and into summer, plus the lack of sunshine and more rain than we're used to in England's driest county, meant that some of the more tender plants haven't done so well, or just didn't even make any effort to grow at all!
That was directed at the Starfish Iris (Ferraria crispa) and Batflower (Tacca integrifolia) tubers I planted - nothing!  The Starfish Iris may grow next year as the tubers are still firm, but the Batflower rhizomes were attacked from the top by mould, and from the bottom by fungus gnat (sciarid fly) larvae and eventually carked it.  Bah!
I did get some Tacca chantieri seeds from Madam A & Jon at the beginning of the year, but they haven't come up either (although they can take several months, apparently...).  My Gloriosa seeds did sprout however, managed a handful of leaves each, then were either demolished by slugs or succumbed to the cold - although I did get a couple of small tubers out of them for next year, though.  And the Iris Burgemeister was doing quite well until a week of exceptionally cold, wet weather caused all the flower buds to fall off (plus I planted it in completely the wrong place - not enough sun). 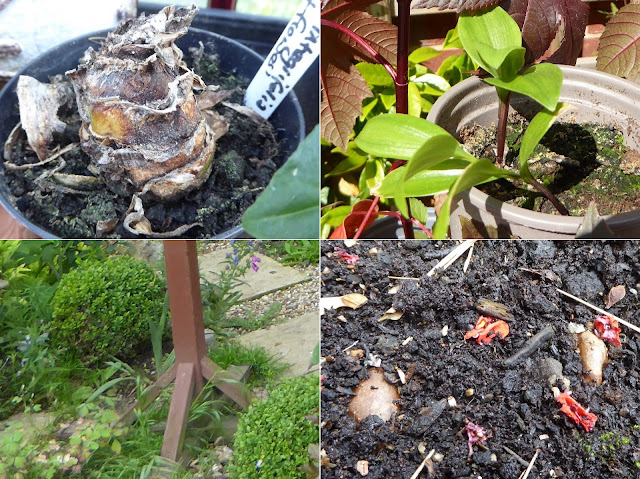 Top left: the hideous batflower stump which taunted me with that small patch of green for months on end.  Bah!  Top right: Gloriosa superba seedlings giving false hope.
Bottom  left: The strappy leaves of Iris Burgemeister can just about be made out to the left of the birdtable.  And bottom right: Starfish Iris tubers doing nothing.  Nothing!

And this is how they should have looked.  From left to right: Close-up of Tacca flower buds (looking for all the world like a couple of hanging bats) chez Dinahmow, (I probably should have taken note of her 2008 post);  Gloriosa superbum superba also courtesy of Dinah;  Irises found at Maddie's (I was going to snatch one of Ms Nations' examples, but the colours of Maddie's were a better match);  and Ferraria crispa (no one has grown these as far as I'm aware, so this photo came from the internet and forms the basis of the packaging featured in my Happy post), the Starfish Iris.
❦
Also, I don't like the new pond.  Well, I do, I just don't like the incredibly dated stone edges - I let The Father (an old-fashioned, hundred million year old, old git) have pretty much free reign with the design and now regret it.  As does The Mother.  Still, bits of it don't look too bad if one squints...
[I don't know if I've mentioned this before, but The Parents live with me here at Hexenhäusli Device - they have their part of the house and I have mine.  The same is true of the garden.  What you see in the photo below is their part - although I assist with the heavy lifting, and also endeavour in some "stealth gardening" by doing some surreptitious arranging and planting.] 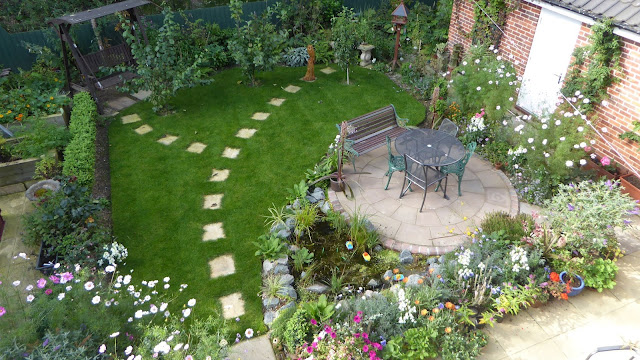 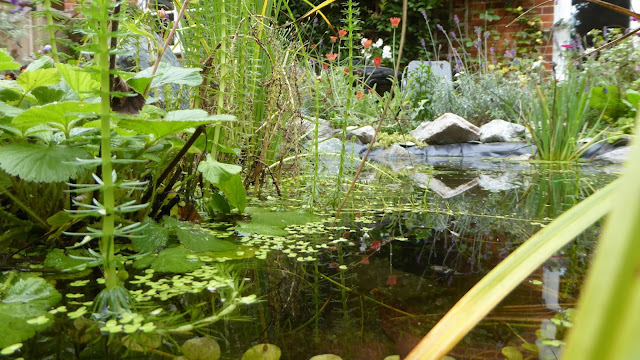 Squinting at the pond 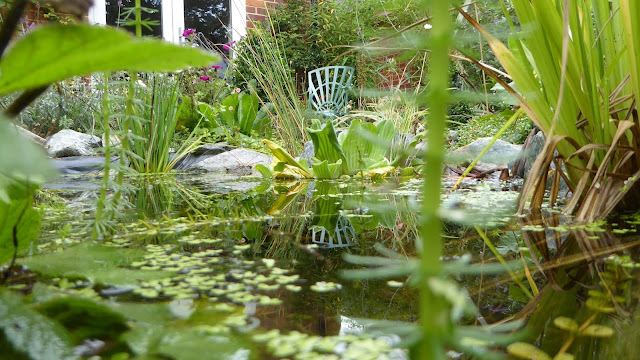 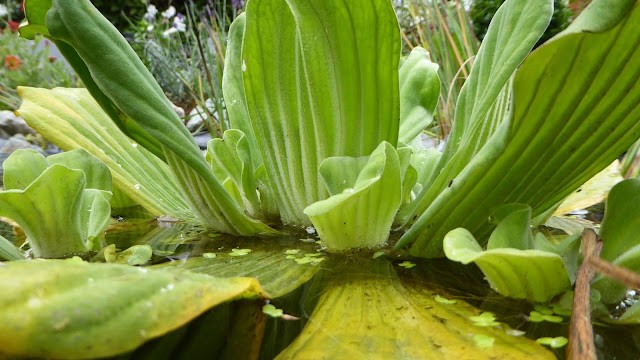 Water lettuce (Pistia stratiotes) - I must remember to bring some of the offsets in for winter as they won't survive the cold. 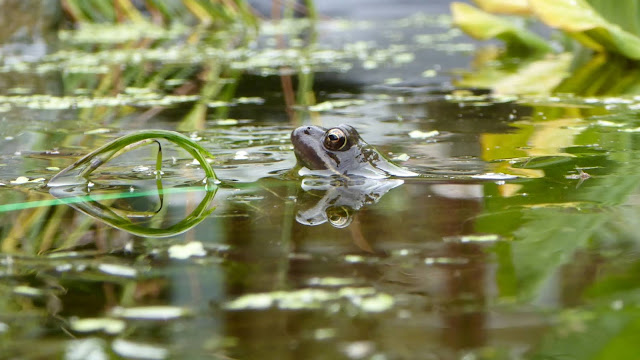 I can't remember who this was, but they probably deserved it. 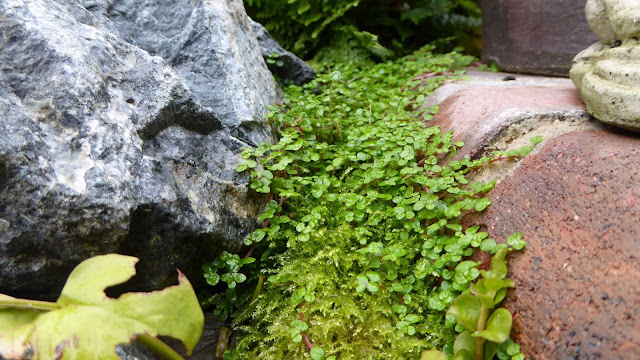 'Mind-your-own-business' (Soleirolia soleirolii)
This small and unassuming, mat-forming plant is one of this year's delights.  The example above was a small handful I scooped up from the Old Vicarage Gardens at East Ruston which has spread rather pleasingly to soften one of the pond's corners.  I scooped up some more from a verge in the village which is now growing on the other side of the pond.  Eventually, I'd like it to spread all around the pond to blend the edges and the rocks together, somewhat like in the 17th & 18th photos of this post from 2017. 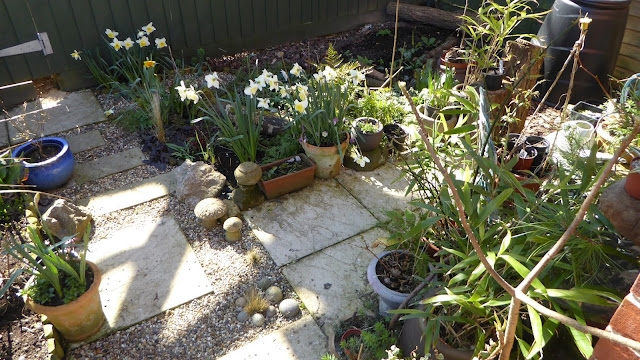 Daffodils in our shady garden
April - Front garden, beginnings of the pond & paysho, and Delargo seedlings.  Then some Spring flowers. 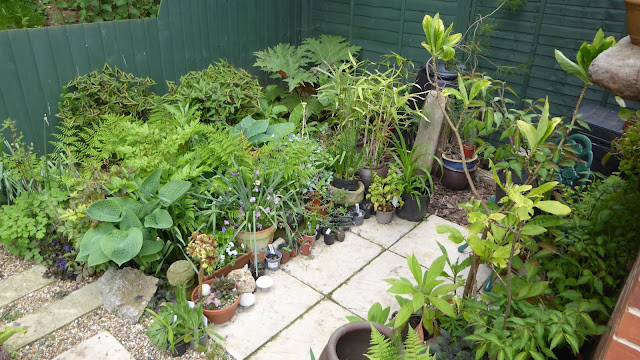 May was the month for Green!  Fresh growth from hostas, ferns, astilbes, knotweed (Persicaria), and ornamental rhubarb in the shady garden 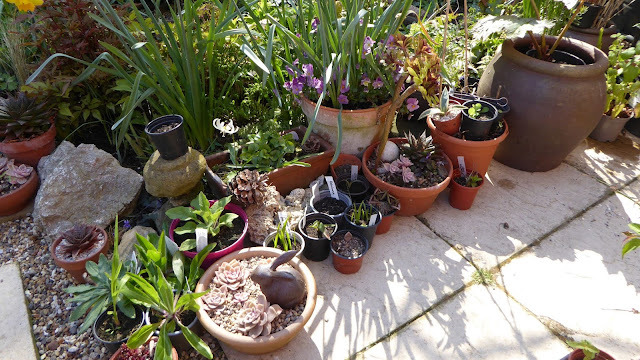 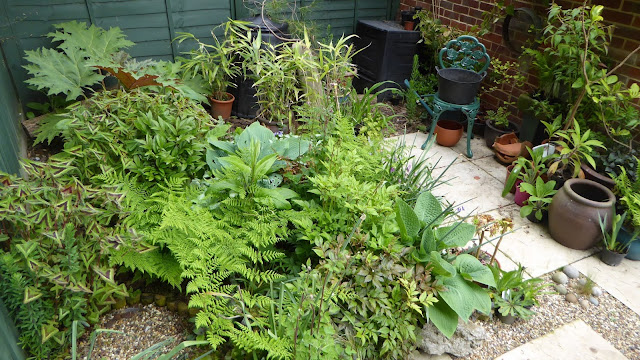 The view from the other side 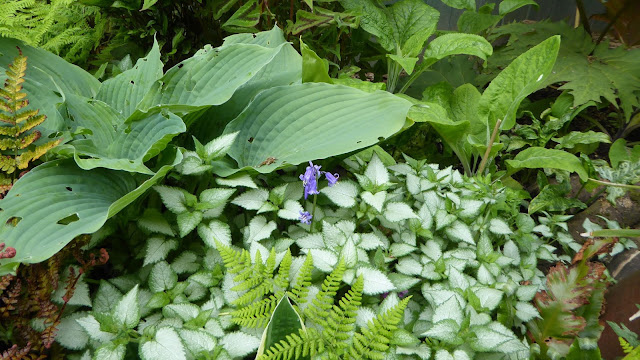 I'm going to have to keep the deadnettle (Lamium maculatum 'Beacon Silver') in check this year - that bluebell was lucky to get through!
Also in May were Aquilegias up the allotment. 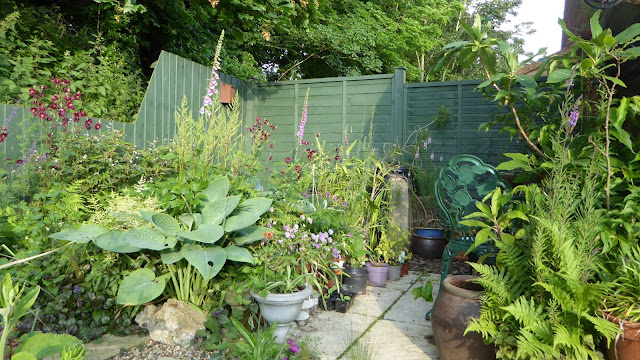 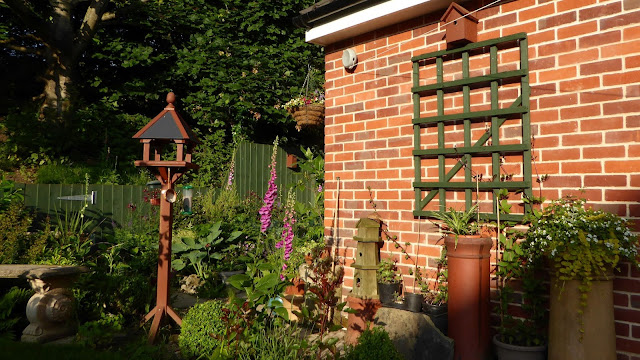 I found an old gate on my brother-in-law's allotment, brought it home, took off the rusting hinges, painted it green and fixed it to the garage wall for my Cup-and-Saucer vine (Cobaea scandens) to grow up (thank you to Madam Arcati and Jon for the seeds) 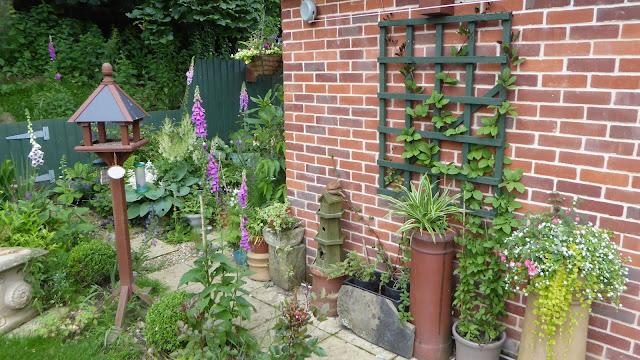 The foxgloves were coming into their own in July 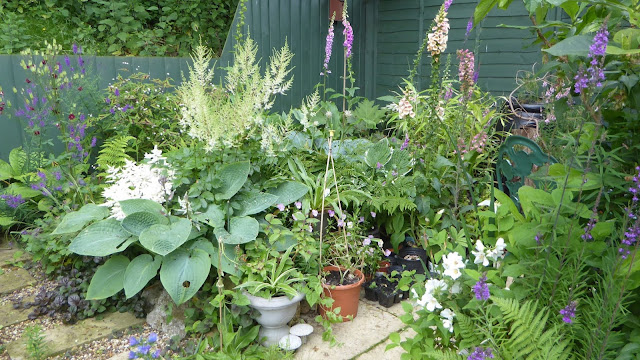 This display was helped along by emptying my purse at the beginning of the month... 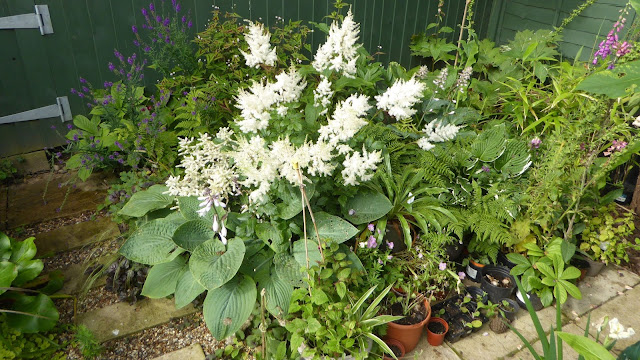 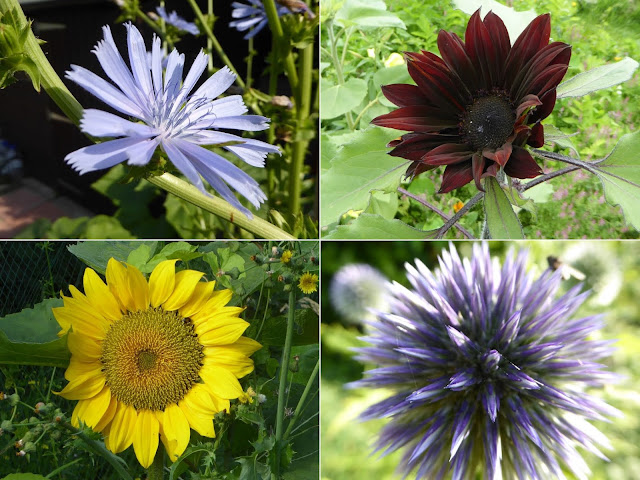 This selection of blooms is from the allotment.  At top left is chicory, then a couple of sunflowers, and a globe thistle (Echinops) at the bottom right.
August - There wasn't really much going on this month.  That photo of the batflower stump at the top was taken in August...

Castor oil plant (Ricinus communis) 'New Zealand Purple' flowers, Pineapple lily (Eucomis comosa) 'Sparkling Burgundy', Himalyan honeysuckle (Leycesteria formosa) berries, and the Cup-and-Saucer vine with a very hardy spiderplant that's made it through two winters completely unprotected (all its leaves died down each winter, but it soon came back in the spring) 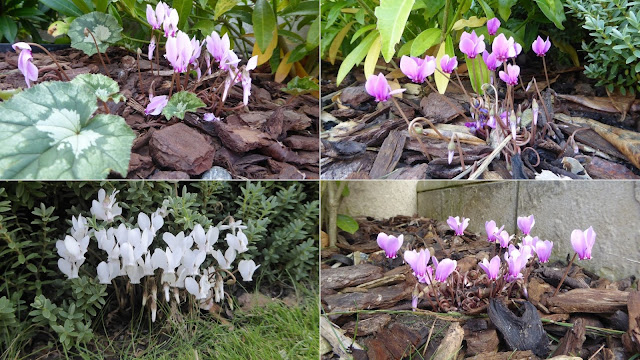 A selection of Cyclamen hederifolium in the front garden 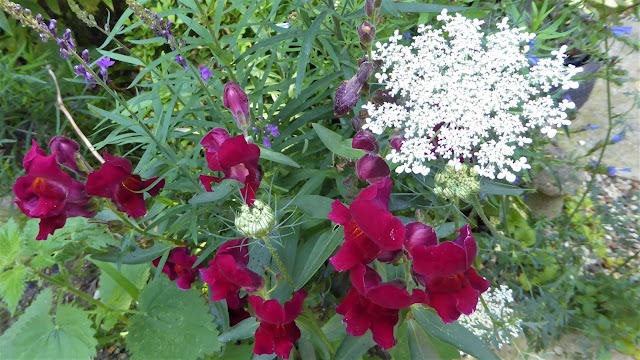 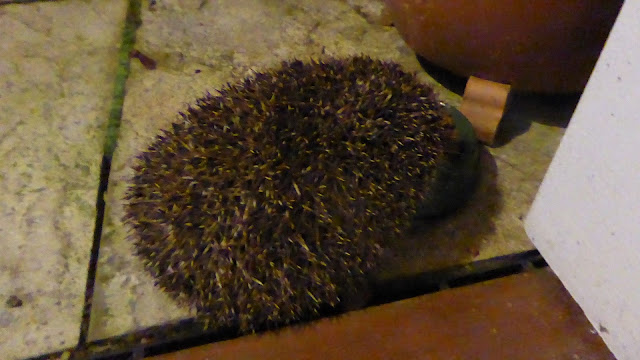 Not a sweet chestnut (see Ms Scarlet's Terrifying Triffidery).
This hedgehog was a regular visitor to the front doorstep where it would shit liberally.
I think it's hibernating now as we haven't seen or heard it for a while?

October - The pond photos were taken in October, as were the Audreys and the pitiful Ferraria crispa tubers-
Which have started growing!  I decanted them from the big pot they'd been in all spring & summer (wishful thinking, eh?) the other day, and both have short roots and one has a noticeable shoot!  They're now in the red greenhouse where I hope they make it through the winter.
Perhaps this is a sign that we'll be in for a better year - weatherwise, at least - in 2022?
☙❧
So, there we have it.  That's the last garden on the tour, but there's one more Garden Photos Event post to come (that I haven't yet finished - barely begun, in fact), so stay tuned!
Posted by Inexplicable DeVice at 00:00