It's hot work being a gardener's boy!

Yes, we have reached the end of this year's Infomaniac Garden Photos Event, and what a year it's been.  Your gardens, vases, and dog-bums have been eye-opening, enviable, and a little bit sick-making!  Thank you so much to everyone who took part - whether you opened your garden (outdoors or in), provided snacks, or just visited & commented - I hope you enjoyed it and that you've been inspired to undertake another year of gardening, whatever your skill level.

And an especially big thank you to The Very Mistress, without whom we wouldn't have a Garden Photos Event!  A potted history - complete with links to Events past - can be found at last year's 10th Annual Lady Garden Presentation Anniversary premier, with links to all the 2020 gardens included in that year's finale, up my, I mean, in my, I mean at the rear.  Oh, you know what I mean!

Anyway, let's get on with with wrapping this thing up, shall we?  We have the links to this year's gardens followed by some interesting stats to get through.

While going through your photos and putting the Garden Photos Event together, I noticed that some plants are rather popular and feature in quite a few of your gardens.  So, I thought it would interesting to see which featured plants are the most popular (I'm only counting featured or easily recognisable plants, not those blurry, out-of-focus ones lolling around in the background). 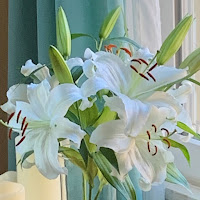 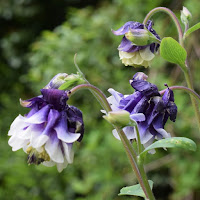 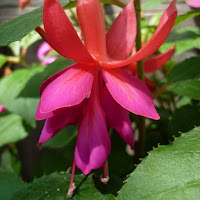 And in joint first place,
growing happily in five gardens each are:
Roses at Ms Nations', Maddie's, Mitzi's, Jon's & Madam A's, and David-from-Portland's.
Fuchsias at Maddie's, Mitzi's, Melanie's, mine, and, of course, Jon's & Madam Arcati's!
Only one gardener (two if we count Hound*) bucked the trend and didn't feature any of the most popular plants:
D I N A H M O W
Although Dinah is not all alone, as both her's and Mitzi's gardens sport a Brugmansia, otherwise known as 'Angel's Trumpet' (not a euphemism).
* Hound, of course, didn't feature any plants at all!  You may be surprised to learn that this is not a Garden Photos Event first.  LẌ famously submitted several cans of cranberry jelly to one Event, and a dusty, plastic weeping fig tree in another (they're linked to in the final paragraph of the last segment).

The Official Plant Spotter of Hexenhäusli Device and its Extensive Witchdom, nay, All of Blogdom Itself!
J O N  has just about earned his keep once more with one or two identifications (the third may acually have been identified by me!), plus a "How to..." of looking after Cyclamen (with input from  T H E   V E R Y   M I S T R E S S  herself), amongst other gracious offerings of expert gardening knowledge.  From all of us, thank you, Jon!

Do you know, I've had to channel The Very Mistress (not a pleasant experience, let me tell you - the more I had to do it, the more I had to resist the urge to wear stripy tights and look at fat, naked, old men on the internet) and say "the Garden Photos Event is NOT a competition/contest" six times during this year's tour.  One particular Blogorati caused me to say it three times!  And there were a couple of occasions when I should have, but let them slide (crosses fingers and hopes not to be banished from Infomaniac - Although, I think I should be okay as one of slidees was none other than The Very Mistress herself!  The other was Hound).

I suppose you'll be wanting to know who invoked LẌ and provoked me into responding in the time honoured way, hmm?  Well, here they are:

And the winner is...

To find out how The Very Mistress dealt with such impertinence, may I direct you to two of LẌ's GPE posts from years past, here and here (there's a lot of sighing and threats of reaching into her bag of "Banned" stickers).  Me?  I'll be in the Gincuzzi...

So there you have it.  It's the end of the Event, and the end of the season, so here's the Official Hexenhäusli Device Lumberjack getting his chopper out to deal with my wood (once you've all buggered off, of course, as he doesn't half make a mess).

Pee-Ess, I hope this all comes out okay.  It never looks quite the same once published as in the 'preview', so I may have to do some reformatting after this has auto-published and I'm awake.  I've also noticed that the font-sizes are all over the place when viewed on Safari (my phone died recently so I've been borrowing The Mother's old iPhone - which used to be my sister's - and occasionally use it to have a look at the blog when I wake up in the morning to check that it published while I slept) - this blog is best viewed in Firefox or one of those Microsoft things - Edge or IE or something.

Labels: Blogorati, Crush, Garden Photos Event, I We Me Us, LẌ, Ms Scarlet, Swearing, Triffids and such, Very Mistress