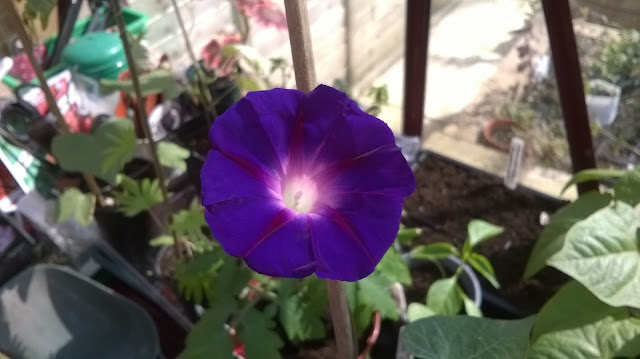 This is just a quick follow-on from my previous garden-related post.  Mainly because I haven't got anything else to publish, as all I've been doing lately is rebuilding the bloody paysho.
And going to the garden centre this morni-
Which was a waste of time as they didn't have what I wanted.  And there were far too many people!
All wearing face masks and
keeping their distance.  Mostly...
Anyway, that's enough from the SubC, let's get on with the post.
Rude!
As you can see from the leading photo, my early Morning Glory has put forth its second flower.  Although, despite flowering very early in the season, this bloom didn't open until this afternoon (because I had it tucked away in the depths of the red greenhouse and only remembered to pop it on the shelf in the sun at lunch time).

That's about it for now except to leave you with a little music from which the title of this post is NOT taken (I find "When Doves Cry" a little too sultry and grim, so you've got "Raspberry Beret" instead).  Oh, and I can see I've got some your blogs to read - but I might just watch a film first...

Posted by Inexplicable DeVice at 18:51