Jon and Madam Arcati
welcome you to


Yes, it's the turn of Jon & Madam A with their ever popular efforts in the Extensive Gardens of Delores Delargo Towers.  And it starts with a star... 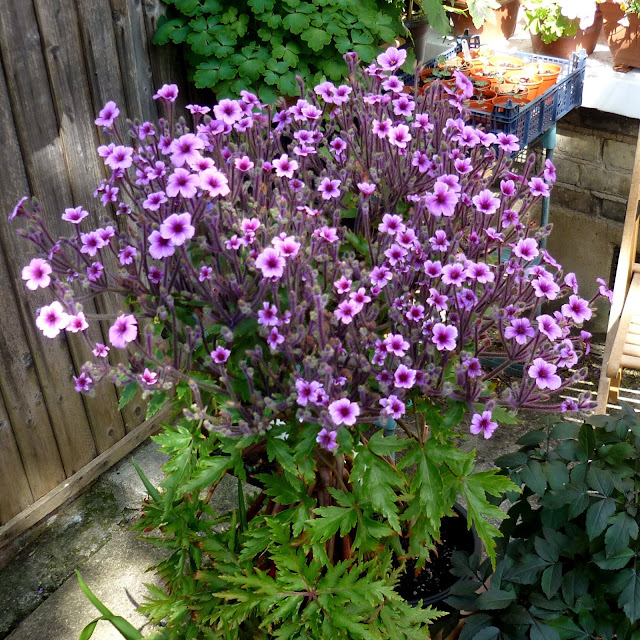 "Star of the Year": Geranium maderense - after a three-year wait, this magnificent 3ft-by-3ft gem flowered from early May to the end of June!
❦
It wasn't a great start to a gardening year - North London had heavy snow in January, followed by cold rain. 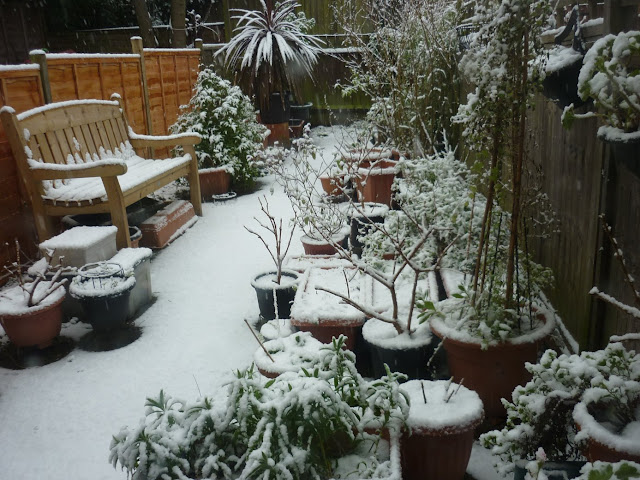 Bleak.
As if that wasn't bad enough, we had a wicked spell of sub-zero temperatures for five days in February [when we should have been in Spain], and it stayed cold for a couple of weeks - and then the gales arrived.  March gave us a "false Spring", with record-breaking temperatures, and indeed we spent Easter repotting and potting-on just about everything.  April started out beautiful and warm - but mid month it turned really cold again, and the dire weather continued well into May.  Storms.  And storms!  And more storms.  As we headed for the end of that supposedly "summer" month, it went freezing cold again - and we had SLEET!  Our heating remained stubbornly on, it was far too dark day-upon-day, and everything in the garden was hit really hard.  Thunbergia, Ipomoeas, Cobeaea and Ricinus looked so sickly that at one stage we felt we needed to bin them.

The single week of hot weather we had, between downpours, in June came a bit too late.  Everything was delayed by several weeks from even trying to bloom, and many plants never really got going after all the setbacks.  Apart from one searingly hot weekend in July, there wasn't enough light through the majority of summer for some plants [thanks not only to the gloomy weather, but also the encroaching weed trees that surround Dolores Delargo Towers - which took so much of any sun we did get during July and August that we couldn't even catch the rays on our skin while sat on the bench as we have in previous summers], including both our new Clematis.  Our Dahlias took ages to grow even spindly shoots, and their flowering was nothing in comparison to previous years.  The Fuchsia collection, despite all their beautiful blowsiness from May/June onwards, all got rust months earlier - and far worse - than they ever have before.

All this sounds terribly depressing, but, as always, some "old reliables" gave us great joy: 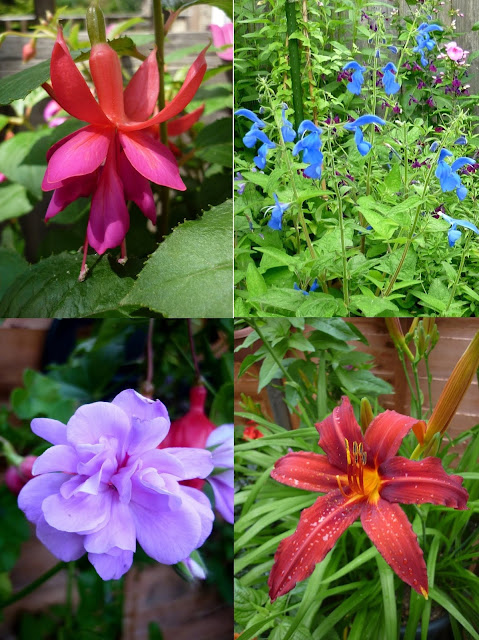 Fuchsia "CJ Howlett" started flowering in late May and is still in full bloom now (with Hallowe'en around the corner) (Jon wrote this on 22nd October - IDV); Salvia patens "Patio Deep Blue" gave us the best and longest show ever; Pelargoniums are truly "non-stop"; and we had dozens and dozens of flowers from Hemerocallis "Crimson Pirate".
❦
Also on the "plus" side, this year (probably due to the grey, damp and mizzle) we have seen more bees, hoverflies and other weird and wonderful occupants of the undergrowth (just don't mention the slugs and snails, which have been rampant!) than ever - and here are some of the seasonal floral highlights in the extensive gardens here at Dolores Delargo Towers that have enticed them in...

Spring in our garden is the season of Primroses, Pansies, Auriculas and the first unfurling of ferns, but especially of bulbs - inluding Snowdrops, Hyacinths, Ipheion, Irises, Chionodoxa, Bluebells, and these... 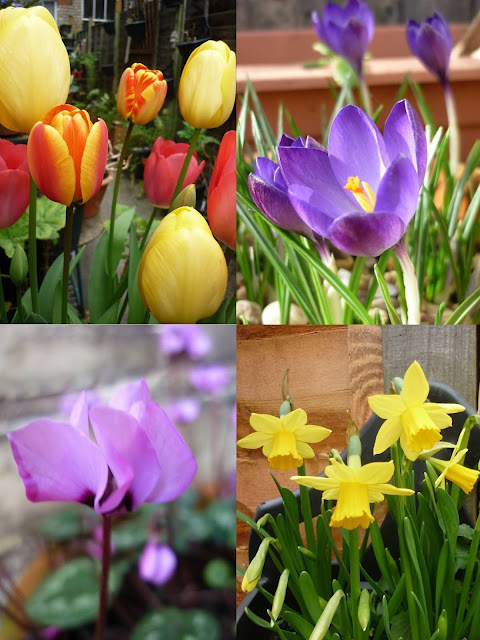 A beatifully gaudy display of Tulips cheers up even the gloomiest of days; Crocus tommasinianus "Ruby Giant"; Cyclamen coum; Daffodil "Tete-a-Tete".
❦
Spring into summer is usually our fave season and, despite the crap weather that befell us, we had loads of joy from the Wallflowers, Aquilegias, Thalictrum, Geraniums, Tradescantia, Forget-me-Nots, Osteospermums, Bluebells, Lily-of-the-Valley, Foxgloves, Hesperis, the first Fuchsias, our new Veronica gentianoides and: 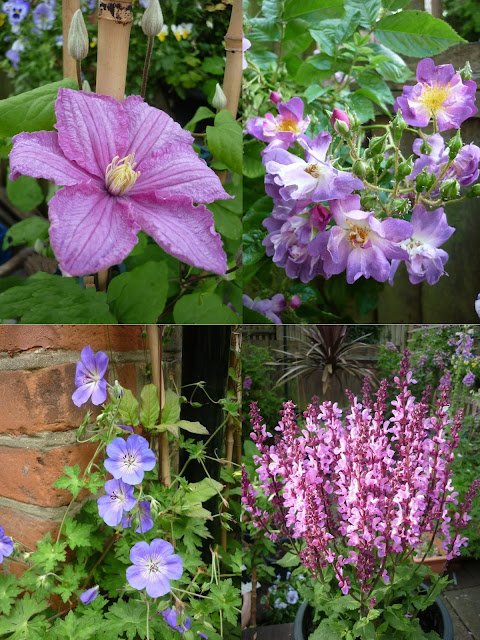 Our new Clematis "Comtesse de Bouchaud"; another newbie, Salvia nemerosa "Rose Marvel"; one of the seventeen sprays of flowers this year on Rosa Veilchenblau; another long-flowering joy, Geranium "Rozanne".
❦
Mid-summer's the moment everything takes off, with many of the earlier blooms still going, the ferns growing huge, plus the peak time for Jasmine, Brodiaea/Triteleia, Monarda, Agastache, Asarina, our new Agapanthus, annuals such as Petunias, Ipomoea, Nicotiana, Scaevoloa, Lysimachia and Bidens [and we grew some evening primrose, but soon grubbed them out as they're too dominant and weedy], the first flush of Salvias, Verbenas, Dahlias and Begonias, and these: 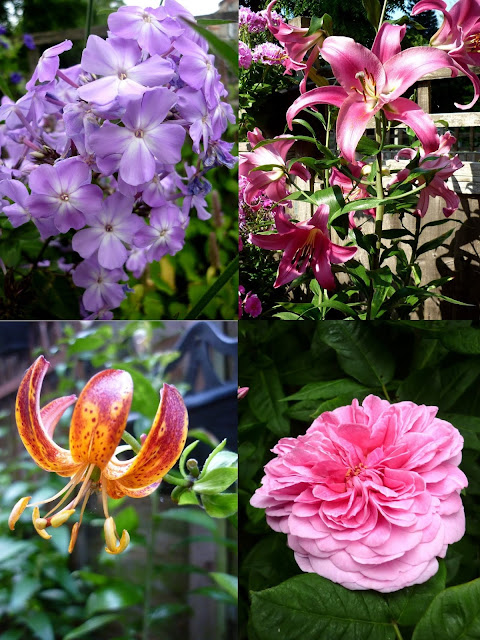 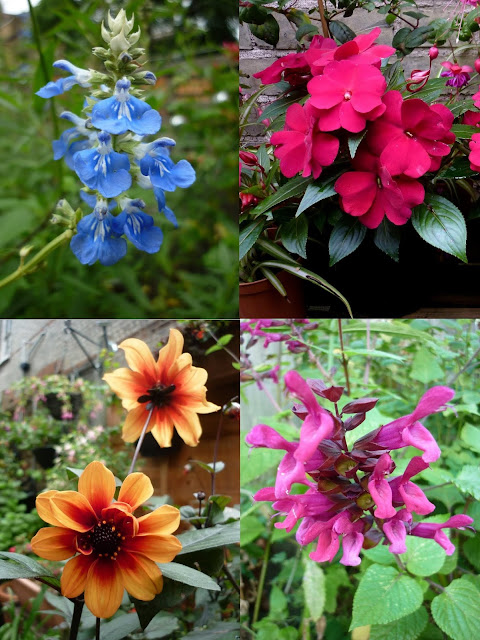 Salvia uligonosa (another plant having its best year to date); New Guinea Impatiens "Carmine Pink"; Dahlia "Bishop's Children" (manfully battling the slugs and snails); our new Salvia "Rockin' Fuchsia".
❦
All-in-all, we've had better years the extensive gardens here at Dolores Delargo Towers, but it's still a brilliant show, and a cut above most around here... 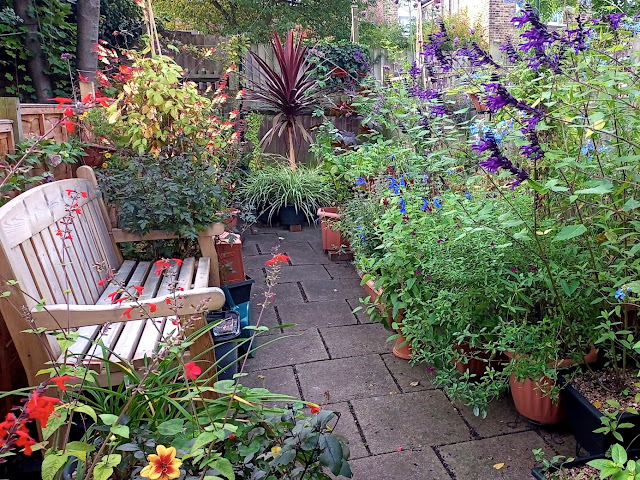 Thank you Jon and Madam A.  Despite everything that the British weather could throw at it, your back passage still remains a wonder of colour and spectacle!

The next garden on our tour is that of Melanie of The Nature-Led Life and Proxima Blue fame, so pop back in a couple of days for a gander.