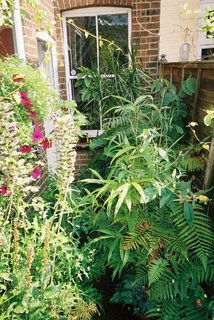 I was clearing out my back passage at the weekend.

This one, you perverts:

As you can see, it had become a little overgrown. What with the weather taking a turn for the worse now that Autumn has settled in, it was about time the house plants were returned to the house and the larger, overhanging plants, such as the Zantedeschia, 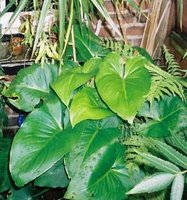 were moved back out of the way. You see, when it rains, the plants just fling the accumulated water on one when brushing past them, leaving one absolutely drenched.

Anyway, I had the fright of my life when I moved the Acanthus. Lurking behind it was a colony of fairies. Contrary to popular belief, they're not beautiful, elegant little creatures. They're vile little monsters. A pox on nature and society. Scabbing off decent hardworking folk, turning milk, stealing washing and spreading disease. Naturally, I cursphered the flyspray to me and gave the little bleeders a good dose, almost asphyxiating myself in the process. Good job they hadn't set up their colony in the house.

At this point, Nuffy came hurtling out of the back door, ears flattened and growling. He leapt, catching one in mid air then shook it vigorously until it hung limp in his mouth. The remaining fairies took off into the evening sky. They were easy to spot as they glowed faintly with a sickly yellow light. I managed to bring a couple down with a well aimed thaumic charge from my wand but the rest escaped. Sod! They'd set up colonies somewhere else in the neighbourhood now. And this was such a nice place to live too.

Posted by Inexplicable DeVice at 17:44