Of Baubles and Blog Parties 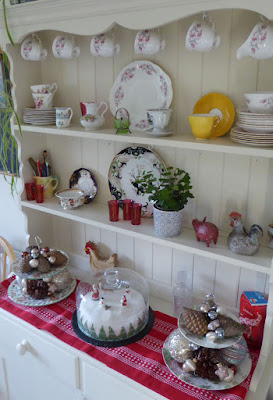 As I said to Mistress Maddie on Monday:

I don't have a tree (haven't in years), but I love all your baubles and such.  And you know what?  You have inspired me.  So much so that tomorrow I'm going to the garden centre next door to buy some of the baubles that I've coveted for the last two or three years.
I'm going to find a nice bowl or somesuch and display them with the pine cones that I collected last month.

Well, I got some, and here is my first effort at displaying them.  This is The Mother's dresser (and the Christmas cake that she made), now complete with be-pineconed & baubled cake stands.

The pine cones have been in the house for a week or so now, and only a couple of them have opened up.  I'm hoping that now they're subjected to the intense furnace-like temperatures The Father keeps the house, they'll open before the winter solstice. 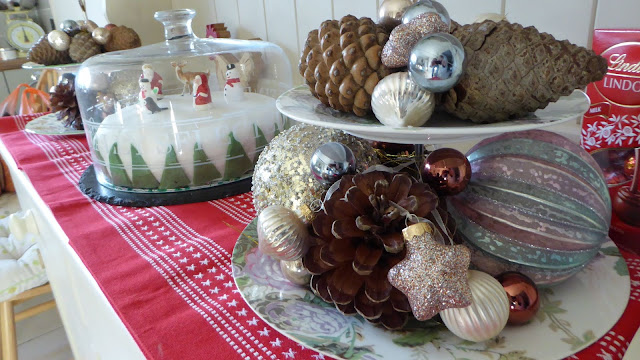 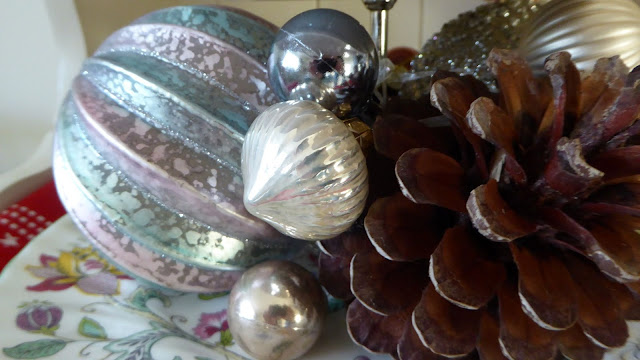 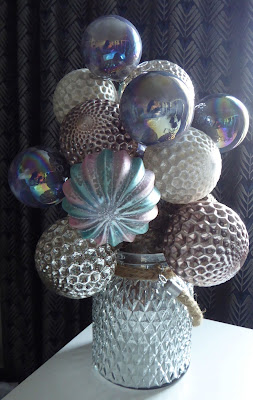 I intended only to buy six of the big honeycomb-like baubles (two of each finish), a couple of the "corrogated" ones and none of the petrolly blue ones or the pearl & glitter encrusted ones, but ended up with nine honeycomb baubles, four corrogated ones, three glitter encrusted ones and five petrol blue ones.  Plus two tubes of mini-baubles, and four bunches of  assorted minis.  This slight loss of my senses cost me just over £100 (!!!).  But they're so big!  And so beautiful.  And so... Oh, gods, what have I done?!

Um, anyway, here is the display I did for myself using a large decorative glass jar I didn't realise I had until I went rummaging around in the garage.  Oh, and some close ups of the different types of baubles. 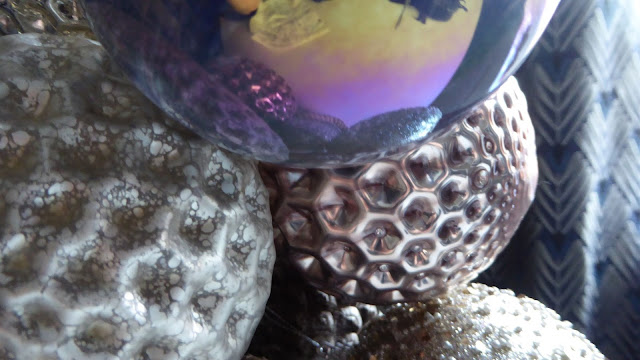 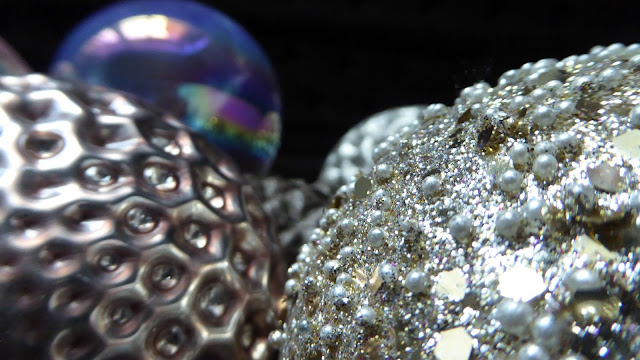 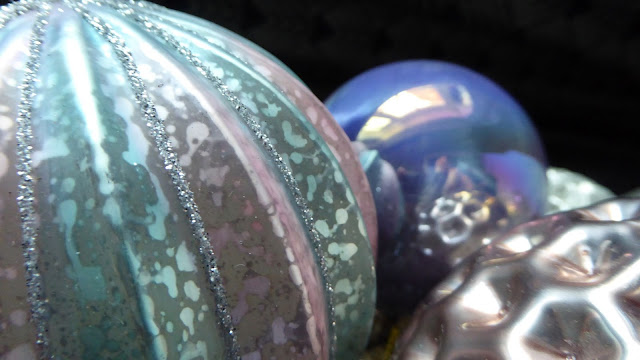 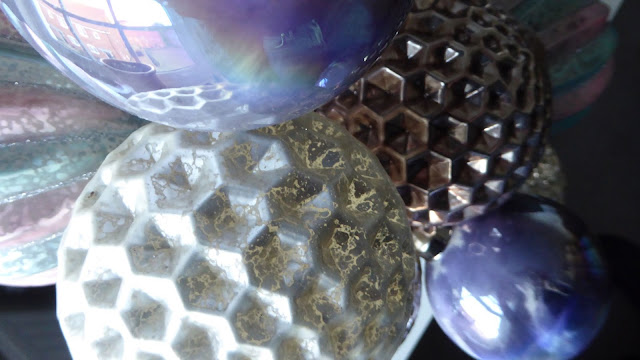 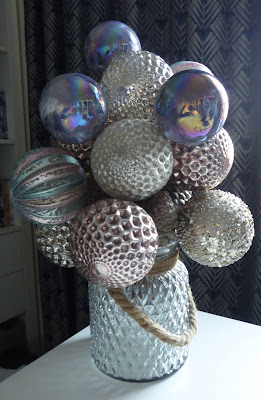 Now on to other things:  Dinahmow has instigated the 2020 Christmas Blog Party - a fabulous affair if ever there was one.  And a much less stressful way of gift giving than an actual physical Christmas (my discomfort around choosing gifts can be found over at Ms Scarlet's place). 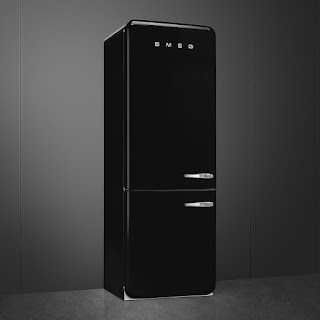 What does one give to our hostess with the mostess, Dinah? Why, something to trap the Blob in should it ever attempt to devour Dinah before she gets to devour it - a new fridge freezer!

Plus, this SMEG fridge-freezer is sure to catch Ms Scarlet's eye too, which means she might stop trying to nab my new turret roof (thank you, Dinah)! 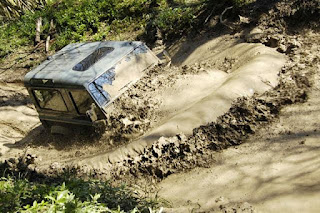 For Ms Scarlet I settled on a little something to cope with Devon's Mud for when her wellies just won't cut it. 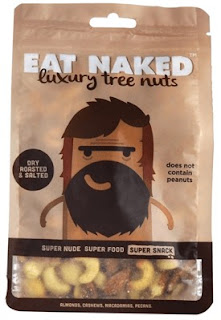 Could there be anything more suitable for Mistress Maddie than a sack of naked nuts?!?  I'm sure Bouvier would like to dig in too, but only after Maddie has sucked the salt off! 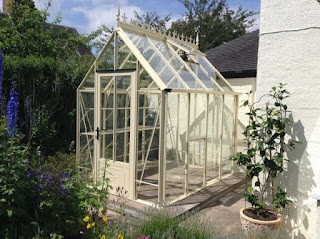 For Jon and Madam Arcati, how about a greenhouse fit for a queen!  (I was going to get them this one, but I didn't think they would be able to squeeze it into their back passage...) 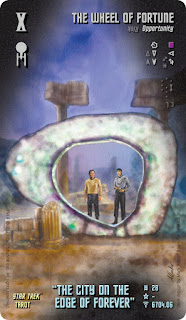 For Hound, something I think I've suggested before - unless I foresaw it in the cards? - a set of Star Trek tarot cards!  Well, it's either this or dog training/obedience lessons to try and get him to stop humping peoples legs and dragging his bum across the carpet... 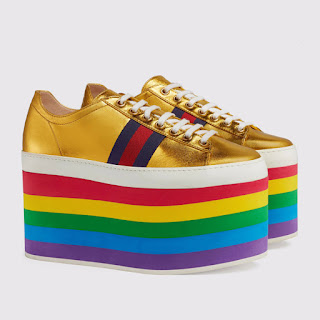 mrpeenee's been looking for some new shoes.  Well, how about this understated pair by Gucci?
I bet they're as comfortable as a one-hundred-mattress-bed fit for a princess - unless Peenee steps on a pea, that is... 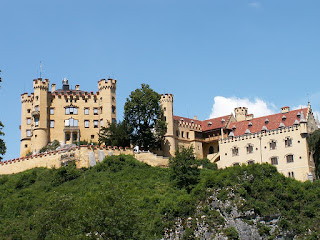 I fear Mago will one day be buried beneath an avalanche of his books, so I decided to give him something to keep them all in.  This bijou and understated affair in Suebia - Castle Hohenschwangau (Ger., Eng.) - must have a libarary or two, surely? 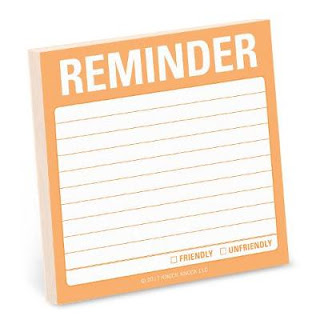 Savvy.  Dear Savvy... For you, may I present a lifetime supply of Post-It-style reminder notes, and a new calendar every year, starting with the 2021 edition of the Shags & Groynes calendar.

For gods' sakes, please use them!!!  I don't want any more excuses or apologies for missed or forgotten competitions, challenges or events!

And last but not least, I thought The Very Mistress might enjoy this informative video.  Although, thinking about it, I imagine she has already tried all these methods and more...

Posted by Inexplicable DeVice at 19:43